Not satisfied with a single server announcement today, AMD also wanted to take the covers off of a new line of FireStream products based on the Evergreen series of GPUs we first saw in the consumer space back in September.  The goal of AMD is obviously to take the idea of heterogeneous computing across both CPUs and GPUs, and the eventual Fusion product lines, and prepare the high performance markets for the entire shift. 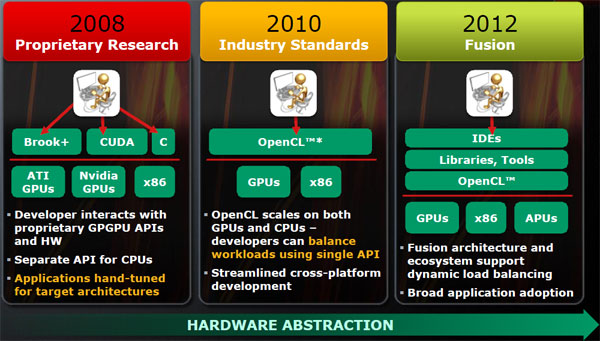 We have seen the GPU quickly turn from a mostly fixed function device as recently as 2006 into a nearly completely programmable processor with the DirectX 11 class of parts from both AMD and NVIDIA.  Along with the shift we have seen the software advance to a point of industry standards like OpenCL and DirectCompute that enable developers to target both CPUs and GPUs simultaneously and much more easily than ever before. 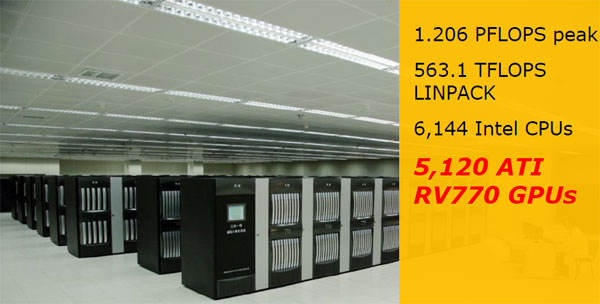 NVIDIA has had a lot of success with their Tesla line of products largely due to CUDA, its semi-proprietary programming interface that currently only works with NVIDIA GPUs (and CPUs).  While NVIDIA definitely has the lead in terms of partners and HPC server GPU market share, AMD wanted us to know that they weren’t out of the market completely.  This super computer cluster known as NUDT’s Tianhe-1 features over 5000 ATI RV770 GPUs and more than 6000 Intel CPUs for a total processing capability of 1.206 Petaflops. 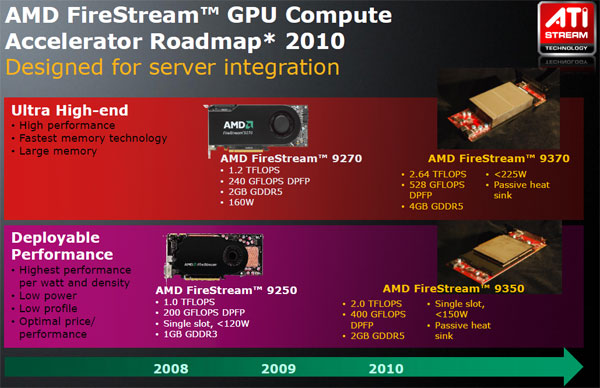 When used in a server environment, GPUs are harnessed for their ability to process highly parallel workloads orders of magnitude more efficiently than traditional processors.  Today AMD is announcing a pair of new FireStream cards that will be available this year based on the most recent AMD GPU architecture. 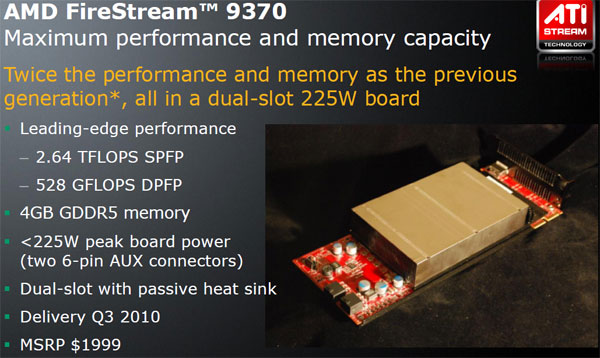 The FireStream 9370 is the highest end offering that will fit into the 225 watt power band but will still be passively cooled with a dual-slot heatsink (and enough air movement inside the chassis).  The performance specifications are very familiar to anyone that has looked at the AMD’s Radeon line of GPUs closely though this card will feature a much larger 4GB GDDR5 frame buffer.  The MSRP of $1999 might seem high but the 528 GFLOPS of double precision computing power is slightly higher than the estimated 520 GFLOPS from NVIDIA’s Tesla C2050 card that will retail for $2499. 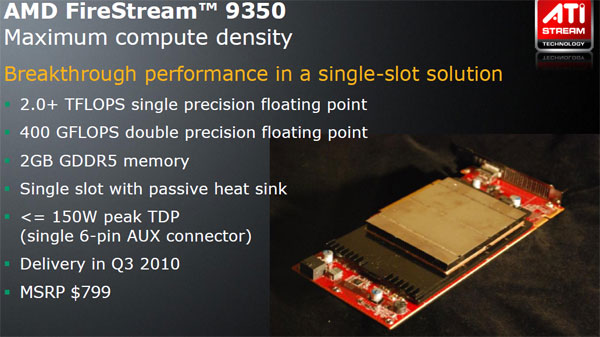 The FireStream 9350 will be available as a single slot card, consume just 150 watts and will sell for a $799 price tag making it the best value in GPU high performance computing.

The specifications look familiar: the FireStream 9370 has the same core count as the Radeon HD 5870 while the FireStream 9350 is similar to the HD 5850.  Obviously these are targeted at drastically different markets but we had to at least recognize the similarities.  NVIDIA’s competition comes in the form of both GT200 and GF100 (Fermi) Tesla options though NVIDIA does offer a higher performance option than is listed here: Tesla C2070 rated at 630 double precision GFLOPS. 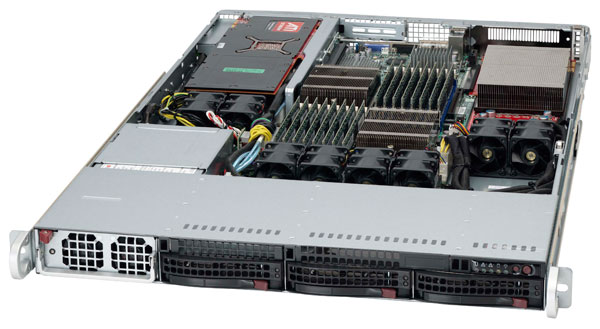 AMD is working with several system builders to offer FireStream-ready systems including this option above from SuperMicro that includes a pair of 9370 cards in a 1U server solution combined with a pair of Opteron 6100 processors – surely a computing beast if we have ever seen one.  My guess is the system will also be one of the loudest we have ever seen as it includes a healthy 1400 watt power supply.

Much as we saw with the Opteron 4100 news on the previous page, the new AMD FireStream cards have an uphill battle to face as no one can really deny NVIDIA has the market share lead and coupled with the CUDA push made over the past several years has made in-roads on the software stack that OpenCL and the other open standards still need to catch up to.  I still believe that AMD is going the right direction for the long term success of GPU computing and heterogeneous computing but can they make up any ground in the meantime?  The FireStream line will be that test as the Evergreen GPU has all the right numbers (power efficiency, performance) to compete with NVIDIA’s Fermi GPUs; the question will be how much adoption they can entice from customers.

Buy 1000 chips and pay at the new prices

A present for AMD fans