AMD has had a stranglehold on the DX11 market, but with Fermi NVIDIA has seemingly loosened the grip. Today’s Dirt takes a look at what prices have done for the past 9 months, and what kind of chain reaction we expect to see this month.

Remember last year when AMD released their HD 5870 and HD 5850 cards at MSRP’s of $379 and $279 respectively?  Remember how those prices soon climbed to $499 and $389?  Remember how in February of this year we briefly saw a few individual SKUs actually reach MSRP again, then spring back up in price by $20 to $30 the very next week?  Yeah, good days, right?  See what happens when there is no competition?  While AMD may be the underdog in the CPU arena, they were standing alone in the DirectX 11 landscape, and they and their partners milked it for every red cent they could.

Sure, as a consumer this sucks, but this was likely a very welcome respite for AMD and their partners.  Both of which have grown used to living on razor thin margins in the past.  Well, the HD 5000 series was a much needed boost to the bottom lines of these companies.  This is a good thing in that they can spend more money on R&D, hire a few more people, and possibly expand into other areas where a profit can be made.  But for folks like you and me, the artificially high prices due to a much larger demand than supply, has made it not nearly as fun due to fewer bargains out there to jump on. 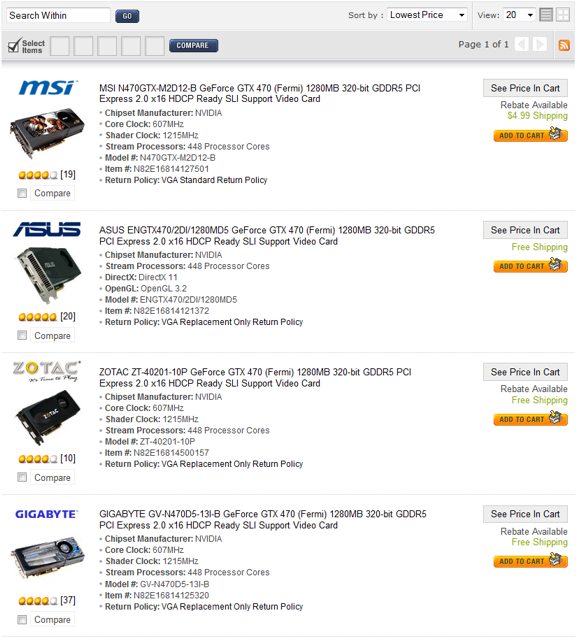 
NVIDIA has been a surprising savior for consumers with their Fermi cards.  Sure, they are not perfect, but they are at least good competition for AMD.  I was actually quite surprised that NVIDIA was able to saturate the market with their top three cards in pretty short order.  About three weeks after release, the GTX 470 and GTX 480 cards were commonly in stock.  Two months after release the two top end cards are widely represented by an impressive selection from most manufacturers, and NVIDIA followed up with the GTX 465 to address the $250 price point.

Last week I noticed something quite nice.  Hopping onto Newegg and checking prices, I saw that most of the GTX 470 and GTX 480 parts were being offered below MSRP with instant rebates, and furthermore most of them had a MIR for another $20 to $30 attached to them.  This made some of the GTX 480s as low as $449, while the GTX 470s are now sitting between $294 and $299 for quite a few SKUs.

The response from AMD and their partners?  Well, so far a handful of cards from the HD 5850 and 5870 series have again been priced as low as the MSRP of 9 months ago.  But that’s about to change.

As mentioned in last week’s Dirt, NVIDIA is very excited about the upcoming GTX 460.  I had mentioned in the article that we would expect to see parts in the $199 to $249 region, and with performance that should match (and exceed) that of the previous generation high end cards based on the GTX 285.  We also expect to see performance above that of the HD 5830, and approaching in some cases the HD 5850. 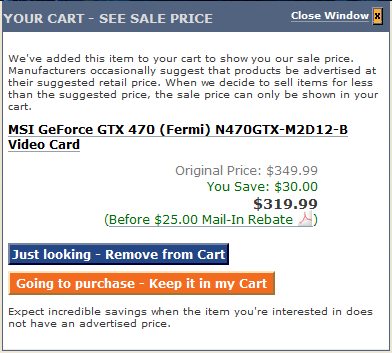 
Looking at the preemptive price drops that NVIDIA has implemented across the board, we can expect that they will really push this GTX 460 launch for all that it is worth.  And finally, finally AMD and its partners will be forced to react and offer their 5800 series of cards for sub-MSRP prices.  It has only taken 9 months to get to this spot!  Not since the GeForce 8800 series of parts have we had such stability when it comes to prices for video cards.  The lack of competition and stable (high) prices have not exactly made AMD and its partners fat with cash over the past months, but it has put a dent in many peoples’ pocketbooks!

The prices until the GTX 460 launch will likely stay much the same for the NVIDIA side, and we will probably see a few SKUs on the AMD side drop by $10 or so.  However, when NV does release their latest midrange warrior, expect the HD 5850 to head towards $259 and the HD 5870 to be in the $349 to $359.  Sure, $10 to $20 below MSRP is nothing to riot about, but considering the historically stable (and sometimes high) prices of the HD 5800 series, this will hopefully help to rev up sales for the first half of Q3.

I’m so happy that NVIDIA has finally gotten back in the game… cough. 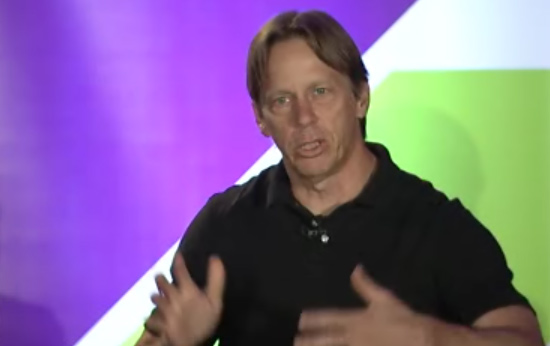