Today should have been a good day for NVIDIA – StarCraft II was released and only their cards support anti-aliasing out of the gate AND the new Fermi-based Quadro graphics offer a significant jump in performance over previous generation parts and AMD’s FirePro options.  Apple apparently had other plans though and has updated its entire line of iMac and Mac Pro computers with a collection of new hardware that apparently leaves NVIDIA out in the cold.

The all-new iMac system line up moves completely into the world of the Intel Core i3 and Core i5 processors which means the use of any NVIDIA chipsets in the base models is no longer possible.  The 9400M/ION chipset was dependent on Apple continuing to use the Core 2 processors and with that gone we are left with integrated CPU-based graphics options and discrete solutions from AMD/ATI.

You can see in the image above that all four of our starting configurations include ATI options, the least expensive of which is the aged 4670 card.  The highest available option on the 27-in model is the HD 5750 which currently sell in the discrete PC market for about $125; these are much better options than the integrated Intel graphics but are no where near the performance level of the options available to PC users.


UPDATE: It was just pointed out to me by a couple people that Apple had in fact removed NVIDIA options from the iMac in its previous update 6-9 months.  So while the timing our news post here is a bit off, the point is still valid that Apple has slowly been fazing NVIDIA solutions from its computers. 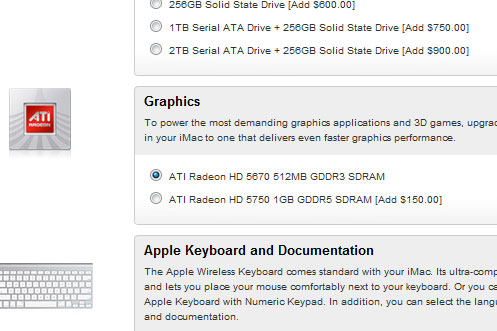 The product description pages talk about the inclusion of discrete graphics for “3D applications and games” but there is a conspicuous lack of promotion of OpenCL-based GPGPU applications that were talked about when NVIDIA was the discrete GPU of choice in the iMac.  This either means that the new ATI graphics cards don’t support OpenCL to the same degree as NVIDIA’s options but I think Apple would likely not have made the move if ATI didn’t support the existing software infrastructure. 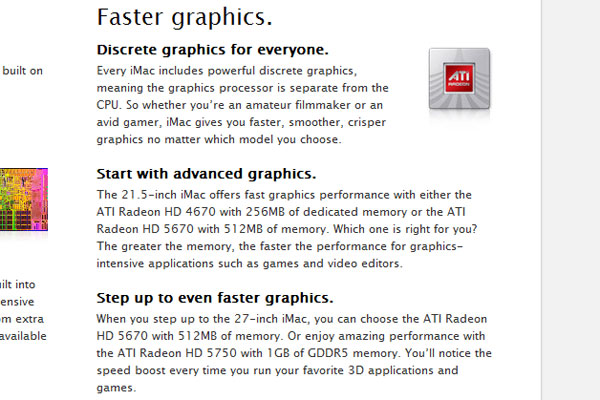 There is also no mention of the on-the-fly GPU switching that was introduced with the updated MacBook Pro machines and the Intel Arrandale CPU / NVIDIA GPU combination.  Because these are desktop systems the need for power efficiency is less vital so not being about to integrate the feature with ATI’s graphics could easily be overlooked.

There are other interesting hardware changes than the move to ATI graphics cards on the iMac lineup including the option to select BOTH an SSD and standard HDD in the 27-in model for both speed and capacity.  That option will increase your system cost by $750 or $900 depending on your choice of a 1TB or 2TB hard drive to go along with the 256GB unnamed SSD and quickly brings the total system to the $3000 mark.  Processor options have also increased across the board with the lowest end model feature a dual-core HyperThreaded Core i3 processor running at 3.06 GHz and the highest cost option based around the quad-core Core i7.


Also announced was an update to the Mac Pro desktop system (coming in August) that includes dual-socket 6-core Gulftown processors from Intel that we have had access to on the PC space since March.  The base price on that model will run you $4999 while the quad-core Mac Pro being the entry point at $2499.  Still, the default GPU has changed to the ATI Radeon HD 5770 which is a bit confusing as this is still a mid-range option by anyone’s scale though the Mac Pro will have the option to upgrade to an HD 5870 for more serious 3D power. 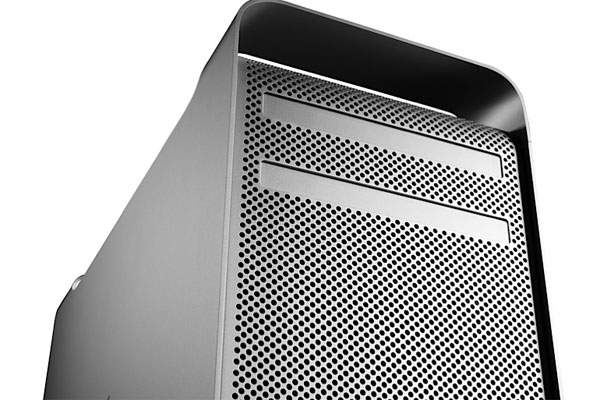 Those of you with money will also be able to throw as much as 32GB of memory, 4TB of standard hard drives and as many as four SSDs in there for a truly impressive workstation.  Just make sure you have that corporate AmEx at the ready for the August release.


What will the move away from NVIDIA graphics mean for the Mac lineup and for NVIDIA in particular?  While the Mac sales weren’t keeping the NVIDIA financials afloat, they were definitely a feather in the cap for the company in terms of design wins.  Over the few years the NVIDIA exclusive has existed though there have been numerous technology problems from their products including over heating mobility GPUs and delayed chipsets and Apple was more than willing to give AMD a try to fulfill their customers needs.  Now, will this lead to seeing AMD processors in Apple computers down the line as well…? 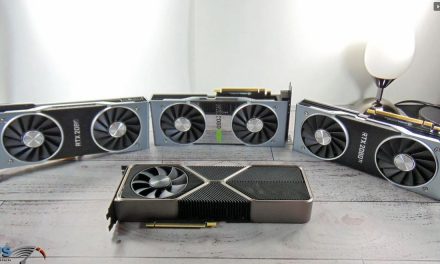