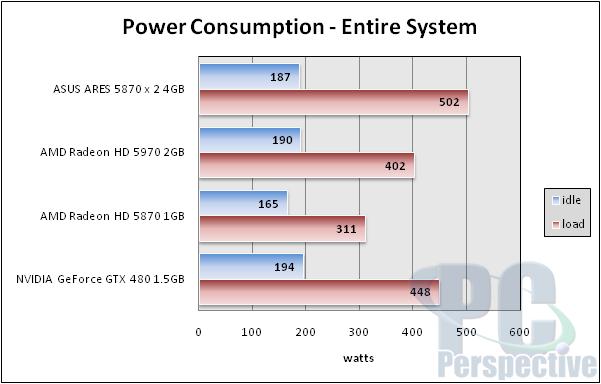 We knew of course that with a pair of 8-pin connectors and a 6-pin as well, the ASUS ARES graphics card was going to use a lot of power.  And it did: 100 watts more than the HD 5970 and just over 50 watts more than the NVIDIA GTX 480 single GPU card.  That’s a lot of power but considering the small gap between the ARES and NVIDIA’s GTX 480, that should indicate something about the power efficiency of both architectures!

One of the benefits that ASUS is touting for their ARES card and the custom, high-end cooling they have integrated on it is the ability to overclock the GPUs. 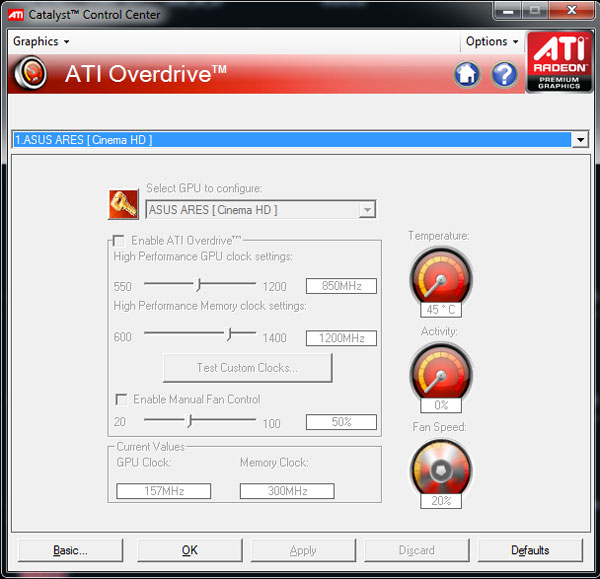 You can use the AMD-based Overdrive tool in the driver but a better option is likely the ASUS SmartDoctor software that comes with the card. 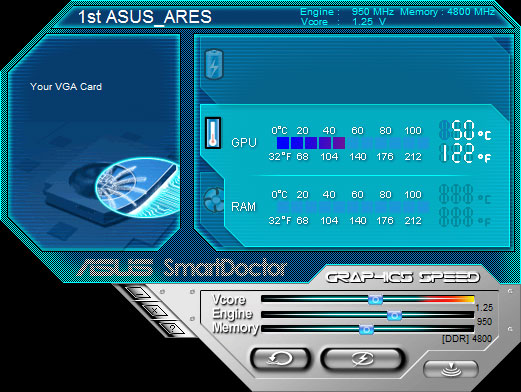 Here I was able to push the core speed up to 950 MHz without a single hiccup and I increased the GPU voltage from 1.175v to 1.25v to keep it nice and stable.  You’ll notice that even after playing some Metro 2033, the GPU temperatures were just over 50C (about 55C when I first exited the game) thanks to the airflow of the ARES card.  Yes, it can get very loud if you want it to.

ASUS did demonstrate the card getting as high as 980 MHz with a bit higher voltages but due to limited time this is where we had stop our experimenting.  More soon!

Without a doubt the new ASUS ARES is the fastest single graphics card on the market.  Period.  End of discussion.  In a relative sense though we have seen performance similar to this from other SLI and CrossFire configurations including the likes of a pair GTX 480s or GTX 470s.  In our benchmarking and testing on the previous pages the ARES was consistently about 15-25% faster than the Radeon HD 5970, the previous leader in single card performance though it also uses a pair of AMD GPUs to get to that level.  The ARES was only averaging around a 40-60% lead over a single HD 5870 and this is a direct result of the ATI driver’s ability to scale in CrossFire; something that NVIDIA’s driver seems to do better with SLI. 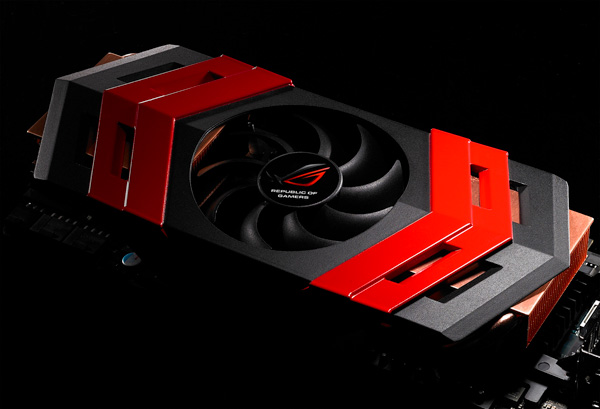 The Eyefinity performance was a bit of a letdown though as I had hoped this single card would be the answer to competing against the SLI configurations from NVIDIA’s GTX 470 and GTX 480.  The pair of GTX 480s would have soundly trounced the ARES and in our tests the GTX 470s were comparable as well.  Again, this is not really indicative of ASUS’ engineering but on the ATI driver team and its ability to produce results and improvements. 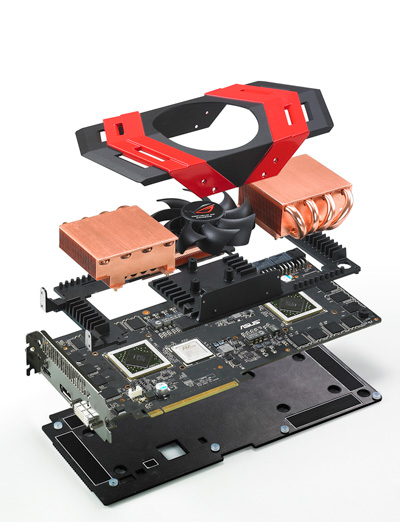 I am still testing the ARES at overclocked settings and I am curious how much this move to 950 MHz core speeds will improve performance for me across the board.  An additional 10% or so could put the ARES in line with a pair of GTX 480s in single monitor tests and then it might actually seem like a better deal in terms of cost!

We can’t emphasize enough how impressed we are with the ASUS engineering team that they were able to manage the power requirements and design a PCB capable of holding two full-size Cypress chips as well as 4GB of memory running at these speeds.  Very few companies would be able to pull this off and produce such a polished design right out of the gate and really create a new new product competent enough to run with the likes of the reference HD 5970, and win!  The cooler design is also pivotal to the success of the ARES card as it allows the GPUs to run not only at stock speeds, but at nearly 1 GHz as while maintaining temperatures low enough for a stable gaming environment.  ASUS won’t sell a lot of these but it is proof that it can execute on a creative and custom product.

And speaking of cost, the ASUS ARES is going to break a wallet or two.  At $1200, and with limited production to just 1000 pieces, the ARES is as much as about status as it is about performance.  Consider that a pair of 2GB HD 5870s will run you $1000 and that a pair of GTX 480s will cost about $960 and you can see that the $1200 MSRP isn’t THAT far out of line.  For that extra $200 you are going to be getting a mouse, a briefcase and the ability to brag to your friends.  Is that worth the cash and upfront investment?

No doubt this will take a special kind of enthusiast; ASUS is hoping for at least 1000 of you.  The ARES should be available in about 1-2 weeks.

If you want the fastest single graphics card on the market today, then the ASUS ARES is your one and only option.  By combining a pair of TRUE Radeon HD 5870 GPUs with a total of 4GB of GDDR5 memory, ASUS has engineered a graphics card unrivaled anywhere else.  The question is whether or not anyone can afford it!  If you have $1200 burning a hole in your pocket and you don’t know my address, then line up when they go on sale so you can own a piece of gaming nirvana.

For being stupid fast.