Today Intel held a press briefing to discuss a milestone in the development of silicon photonics reaching a reproducible 50 Gbps link between two modules. Silicon photonics is the process of creating, modulating and reading photons via lasers for communications entirely on manufactured silicon. The technology and work being done is very complex but the ideas are pretty simple: create a piece of silicon that can create a laser to transmit data and another chip that can receive and decode the data at a low cost.

Today Intel held a press briefing to discuss a milestone in the development of silicon photonics reaching a reproducible 50 Gbps link between two modules.  Silicon photonics is the process of creating, modulating and reading photons via lasers for communications entirely on manufactured silicon.  The technology and work being done is very complex but the ideas are pretty simple: create a piece of silicon that can create a laser to transmit data and another chip that can receive and decode the data at a low cost.

Intel’s Justin Rattner and Mario Paniccia demonstrated the first photonics link capable of 50 Gbps using the research going on inside Intel for the past decade. 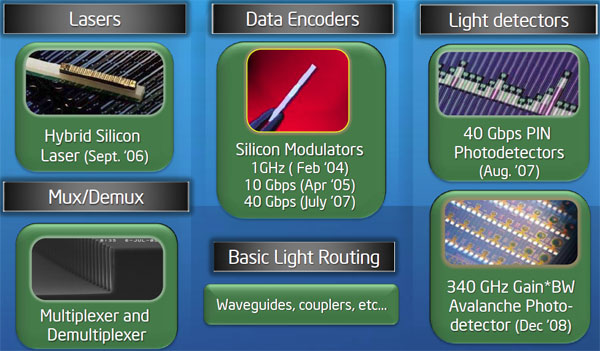 The process to get where Intel is today did not happen overnight and there were many milestones along the way that were necessary before the culmination could work reliably.  Back in 2006 Intel and the University of California Santa Barbara developed the first hybrid silicon laser that enabled a silicon-only solution to start the data transmission process.  The modulators responsible for converting data into light have slowly increased from 1 GHz to 40 Gbps over a few years and the multiplexers are necessary to combine the silicon laser data.  Along with the transmission the development of photodetectors to receive and decode the data were being fleshed out in mid 2007 with some incredibly fast versions as recent as winter 2008. 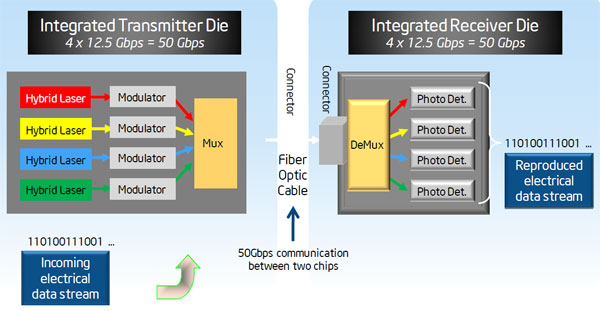 All of these components are combined into a single piece of silicon on either side of a fiber optic cable to offer incredible data transmission speed.  The transmitter die on the left in the diagram above shows a set of four hybrid lasers each tuned to a different wavelength of light that run into modulators that act as optical shutters.  The current iteration of these modulators are capable of running at 12.5 Gbps each and when they are combined by the multiplexer a total of 50 Gbps is available to output through a single fiber optic cable. 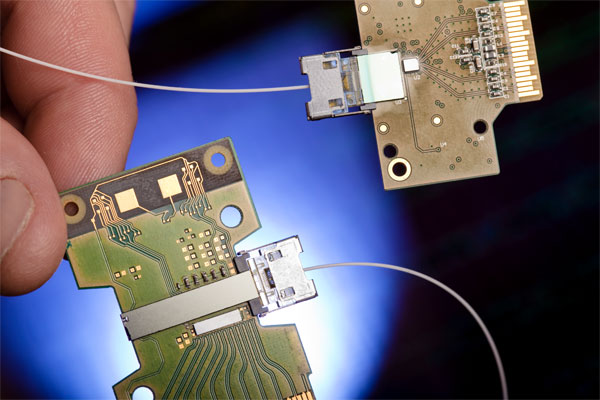 The transmitter silicon is longer because of the hybrid laser


On the other end of the connection lies the integrated receiver chip that uses a demultiplexer to separate the light into the four light wavelengths once again and then into the above mentioned photodetectors that then convert the 12.5 Gbps streams of data back into 1s and 0s to be used with currently existing electrical systems. 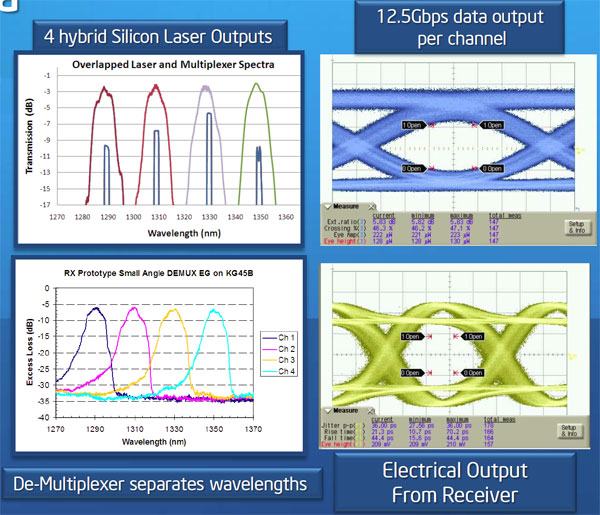 These four diagrams show each component at work; the top left image shows each laser at different wavelengths (1290, 1310, 1330, 1350 nm) as the tight rectangular readings while the multiplexer results are seen over them.  In the top right is a view of 12.5 Gbps of data running through an oscilloscope before it hits the fiber cable.  The bottom row shows the demultiplexer at work separating the light channels very effectively and resulting in the single 12.5 Gbps data stream of one of the four photodetectors. 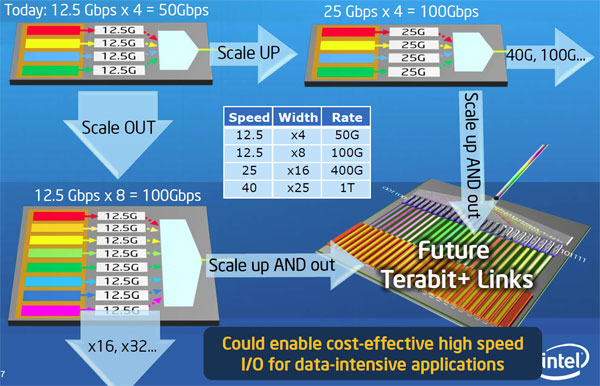 Achieving a 50 Gbps data rate is impressive but it isn’t the goal of Intel to stop there and instead they have plans to scale silicon photonics both up and out.  Scaling up involves increasing the throughput of the modulators above 12.5 Gbps to 25 and even 40 Gbps based on research Intel has already started.  By doing so with the current 4 laser implementation we would see as much as 100 Gbps total speeds.  Scaling out simply means Intel could increase the number of laser of different wavelengths on the silicon to 8, 16, or 25 and increase bandwidth that way.  Or better yet, combine the two methods and have a 40 x 25 connection capable of reaching the 1 Terabit per second mark!

How will we use it?

The technology is definitely impressive and we haven’t seen anything of this caliber coming from any other technology house yet giving Intel a sizable lead in development.  But what is this technology going to be used for?  Surely we have all heard about LightPeak, another optical connection technology from Intel, but that is limited compared to what silicon photonics can and surely will become. 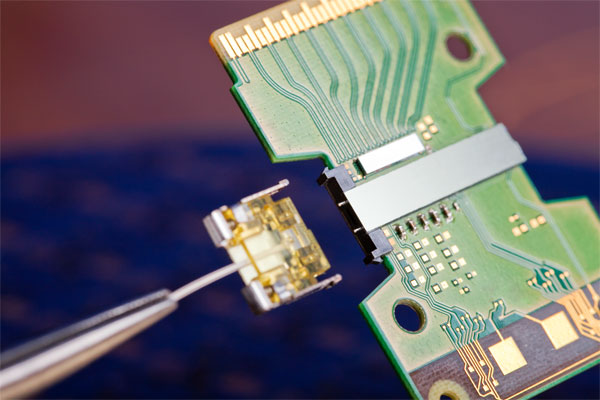 
The most obvious place we could see this applied is in the server space where communication between servers and data centers could be drastically improved, enabling interesting paradigm shifts in data sharing and audio/visual communication.  Obviously the shorter the cable/connection between the silicon photonics transmitter and receiver the easier this change will be, but Intel tells us that the because light can travel so much further on much lower cost infrastructure this could be used for long distance connections as well.

Silicon photonics and data rates of this speed are not simply going to be in the enterprise market.  Imagine downloading 1000 high resolution photos, 100 hours of digital music or an HD movie from iTunes in less than a second; that is what is possible with the current 50 Gbps rates Intel is demonstrating.  With the theoretical 1 Tbps speeds we mentioned above you could back up the entire contents of your hard drive or 2-3 seasons an HD TV drama in that same second.  Obviously there are a lot of other infrastructure issues that would need to be addressed before anything like would actually be feasible (how about some faster data connection speeds than SATA 3.0 Gbps SSDs Intel?) but removing bottlenecks is the key to advancement. 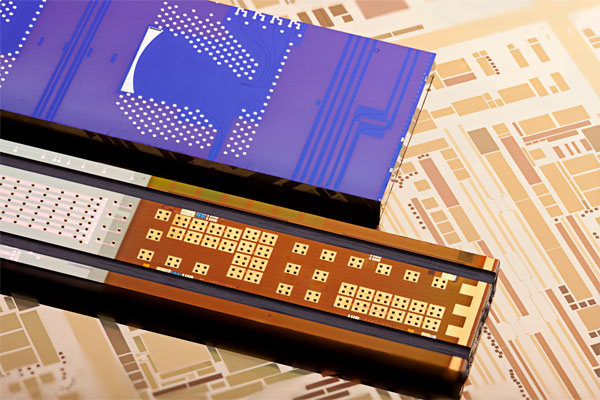 Receiver on top, transmitter on bottom


Looking even further down the road it is likely we will see photon communication replace the intra-chip communications used for motherboards or even multi-chip packaging.

It seems amazing that when the laser was invented in 1960 no one really knew what the technology would be good for.  Today, 50 years later, not only can we use them to read bar codes at Wal-mart but we can transmit data at previously unheard of speeds.  I realize the joke will likely be over used but: frickin’ lasers!!

Ivy Bridge Core i5 and Core i7 specs