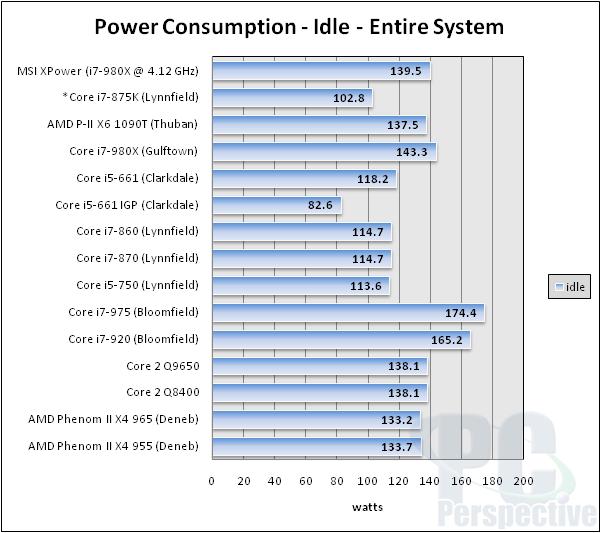 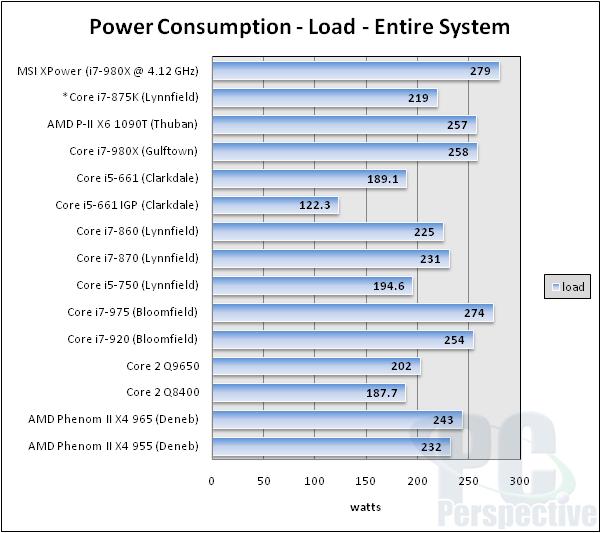 Under the best idle conditions the MSI Big Bang XPower motherboard doesn’t use any more power than our previous Gigabyte X58 motherboard.  Under a full load though the overclocked settings and higher voltages did push up power consumption a noticeable amount: 21 watts or so.  The extra 8-pin CPU power connector and the 6-pin GPU connector no doubt add to that as well but the power boosts are most likely negligible for most users interested in a high powered board like this.

Performance is tough to judge in the world of motherboards these days if only because implementations of the same chipset across different motherboard and even different motherboard vendors are so similar.  The days of motherboard vendors being able to differentiate themselves with performance tweaks or boosts over the competition are pretty much over and have been for years.  Now companies like MSI, ASUS and Gigabyte have to go deeper into the world of overclocking features and stability improvements to stand out.

That being said, the inclusion of a feature like OC Genie really helps MSI’s motherboards appeal to users that might not otherwise think about overclocking.  Pushing on physical button the board and then powering it on is all that was required to see the performance boosts you see here in our testing over the standard clocked Core i7-980X on the Gigabyte X58 offering.  Even the most basic users should find this option very appealing.

We have already detailed about the OC Genie feature, so we won’t go into again here.  The other features of the Big Bang XPower include the ability to run six graphics card or at least a few of them in 3-Way SLI or CrossFire X configurations. Obviously not a lot of users are going to go that route but not many people are going to pay this much for a super-high-end motherboard either.  And even if you don’t plan on going for multi-GPU configurations today, getting a board like the XPower will guarantee you have the maximum amount of bandwidth available if you change your mind later. 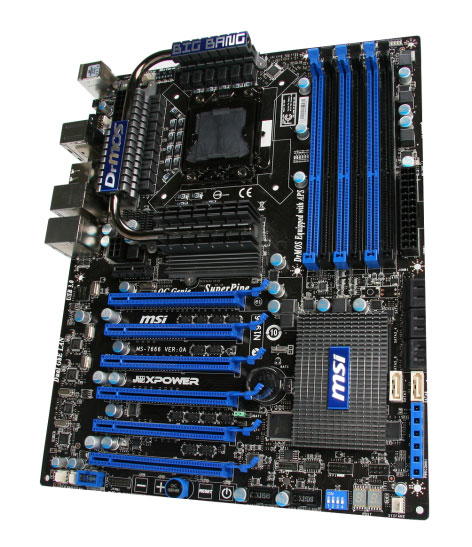 On the first page of the review we detailed some other features that MSI has included with the board like the OC Dashboard, military class components for power management, dual 8-pin CPU ATX power connections and an added 6-pin power connection for GPU stability and more that really make this board as “bulletproof” as any PC component can hope to be.

The MSI Big Bang XPower motherboard is readily available today and will run you about $279 after a small mail-in rebate.  No doubt that is a higher price than a lot of users can justify for a motherboard but when you are building a system for overclocking and for high performance, it helps to have a solid base to start on with a quality motherboard.  If you are looking for an X58 solution you can definitely lower cost options but not likely any that have the features, overclocking options or the power stability of the MSI XPower.

The Big Bang XPower motherboard continues with MSI’s new goals of becoming a powerhouse in the world of high quality PC components and the result here is pretty impressive.  If you are looking for a motherboard that offers a great combination of overclocking features, high quality components, added extras and graphics expandability and can afford a slightly higher price for the job, the MSI Big Bang XPower is a great option!