The new NVIDIA Quadro 5000 professional graphics card finally brings the Fermi GPU to the world it was originally designed for: content creators. Even though a whole new line of parts is being introduced it is really the 5000 model that will see the brunt of attention with a modest (!!) $2250 price tag. Performance might lag in gaming (clocks and specs are under a GTX 465) but in the world of CAD, design, animation and more the NVIDIA card has the edge over AMD’s FirePro line.

What Fermi was Built For

Since the introduction of the Fermi architecture nearly a year ago, we have known that NVIDIA really designed the GPU from the ground up for their Quadro and Tesla lines of products.  The Tesla products are mostly server-based and aimed at the HPC (high performance computing) areas while the Quadro line is targeted at those people responsible for creating all the content we see in the world.  Whether that is the latest PC gaming titles, the movie you saw last weekend or even the late night news, there is a good chance there is a Quadro at work somewhere in the pipeline. 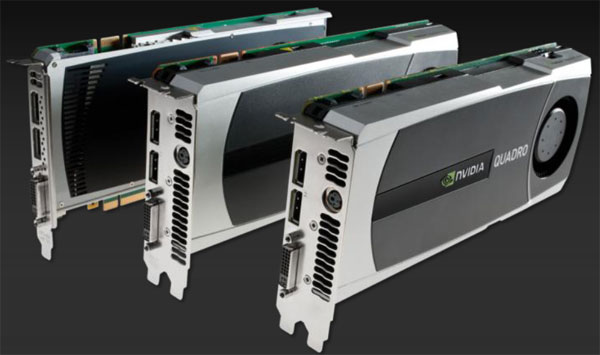 The updated Quadro graphics cards that NVIDIA is introducing today are the first to use the Fermi GPU – the latest generation of graphics processor from NVIDIA that was released to the consumer as the GeForce GTX 400-series of cards back in March.  We have already extensively covered the new GPU core, codenamed GF100, and what it offers in terms of performance, features, power consumption and more so I won’t bother you again with the details.  What we will do is talk about what NVIDIA is offering with the new Quadro 4000, 5000 and 6000 cards and how professional developers could take advantage of the power of this graphics processor.


The New Quadro Features and Lineup

As I mentioned above, the Quadro line of cards is used most commonly by professional developers in the world of CAD, video production and simulations as they create the products that we might eventually watch on TV or play on our PCs (NVIDIA powered of course if they have anything to say about it). 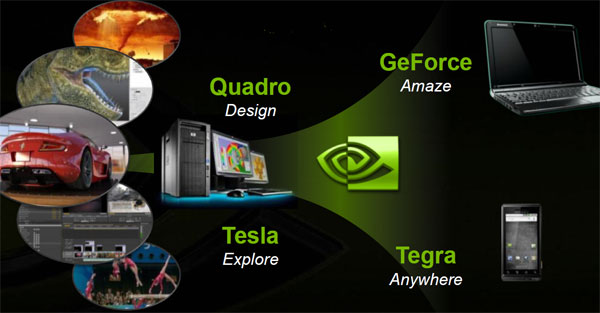 Over 90% of the Fortune 1000 companies currently require and specify NVIDIA Quadro solutions somewhere in their workloads and NVIDIA is very proud of its saturation and dominance in a lot of areas of this market.  By keeping companies attached to their products and brands at the high end, much of this will filter down into the consumer systems and maybe even handhelds if the Tegra products can start to gain ground in the mobile world.

With a total addressable market estimated at more than $2.3 billion, getting as large a slice of the action as possible is one of the keys to keeping NVIDIA afloat financially and the stock holders and executives know it. 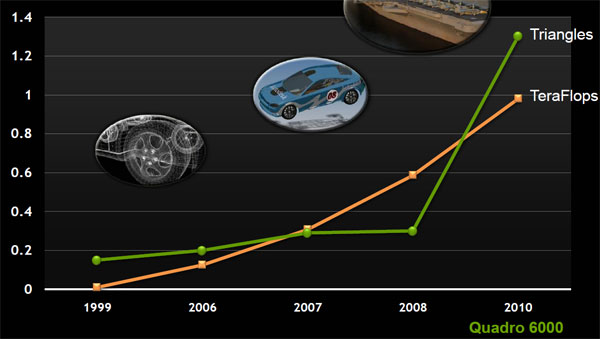 Just as we saw when NVIDIA was pushing the GF100 to us as a gamer’s card, the new Quadro lineup using the same GPU architecture takes a significant jump in triangle processing power thanks to the addition of the tessellation engines.  That improvement in performance will benefit a lot of potential Quadro customers to whom geometry is really key. 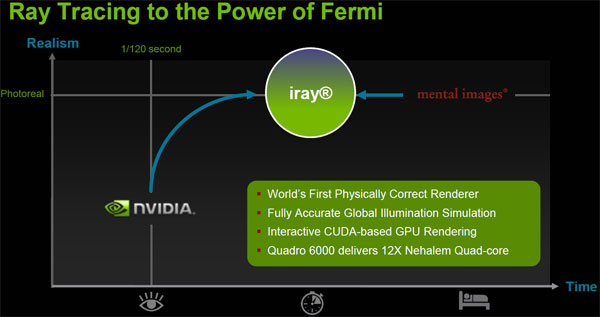 Also getting extra attention from NVIDIA with this release is ray tracing, that bullet point that won’t go away no matter how many times we dive into the subject.  The newly named “iray” engine from NVIDIA takes the work that NVIDIA already had in-house on developing a GPU-based ray tracer and adds in the expertise of the “mental images” team that they acquired. 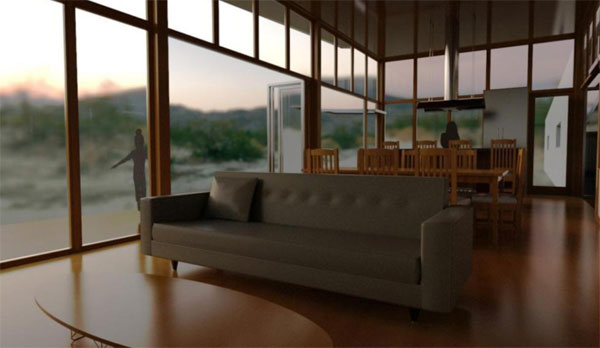 NVIDIA claims that this engine is the first “physically correct” renderer though I have no doubt I would get arguments at the very least from Caustic.  The performance claims that the Quadro 6000 is 12x faster than an Intel Nehalem quad-core CPU are definitely impressive but we are still a distance off from real-time ray tracing for complex scenes. 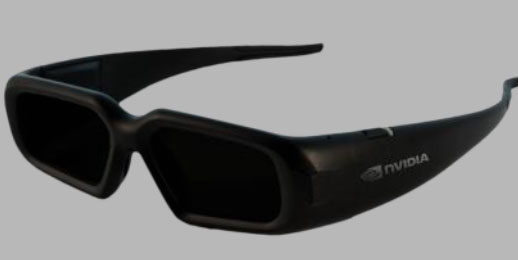 One of the most interesting additions to the Quadro lineup is the introduction of 3D Vision Pro, an upgrade to the current 3D Vision technology available for gamers looking for some 3D action.  We have talked about 3D Vision many times over the years and even recently showed a set of three displays running it for some 3D Vision Surround gaming – and it was definitely impressive!

The new Pro version is very similar, requiring specific 120 Hz displays and active shutter glasses like the ones seen above, but there are a couple of key differences.  First, these glasses use RF communication rather than infrared which means the coverage if larger (up to 100 ft) and there is no line of sight required for the transmitter box to the glasses.  This allows for better multi-user environments that might see interference from surrounding IR blasters and easier setup of the 3D Vision features.

This will come at a cost though, as most professional hardware does, with the glasses going for $349 and the RF emitter selling for $399 starting in October.   I wonder if these new options might filter down into the consumer space…? 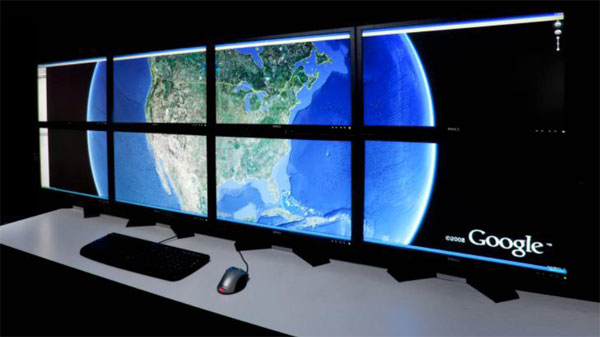 Finally, NVIDIA is matching AMD with the inclusion of professional level multi-display technology called “NVIDIA Scalable Visualization Solutions” that will allow multiple monitors to function as a single display to the OS and “just work” with any application.  While NVIDIA has supported this on their QuadroPlex external boxes for a while they are now allowing SLI Quadro buyers to utilize the same options.

Now to the products themselves – as you may have noticed above NVIDIA is going with a completely new naming scheme this time around.  While the 4000-series might have already been started by the Quadro FX 4800, NVIDIA is dropping the FX moniker and is instead settling in on very basic numbering systems: 4000, 5000, 6000 and 7000. 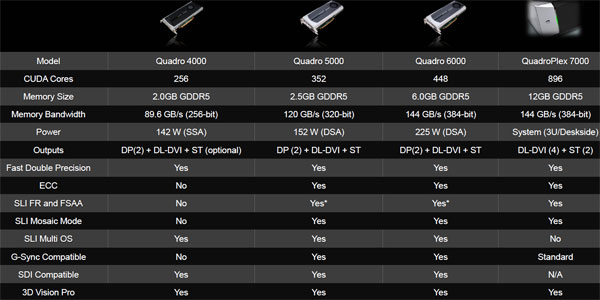 
All of the new Quadro offerings are based on the GF100 GPU and that creates the standard professional/consumer comparisons.  Obviously the Quadro 6000 is closest matched to the GeForce GTX 470 while the new Quadro 5000 looks a lot like the now EOL GTX 465.  Memory capacities are the major hardware selling difference with the 6000 providing 6GB (!!) of GDDR5 memory.  The new Quadro 4000 has 256 CUDA cores which is the lowest core count for a GF100 product yet and I am curious if we will ever see such a beast on PC gaming store shelves.  The QuadroPlex 7000 is essentially an external system utilizing two Quadro 6000 cards in SLI with a custom connection to the workstation for access to the computing power.

Street prices are going to be set as follows:
I marked both the 6000 and 7000 units as “Fall” because while the 4000/5000 set will be available immediately, the other two won’t show up until later in the autumn season.

NVIDIA will also be launching the Quadro 5000M professional mobility GPU today that sports 320 CUDA cores and 2GB of memory.  It will be available in 17-in mobile workstations from both Dell and HP.