A second piece of AMD “news” is hitting the streets this Sunday night, and that is the delivery of a device to enable three-display Eyefinity support for non-DisplayPort monitor users for under the $100 price tag that has existed for a full year.  When AMD first launched the Radeon 5000-series of graphics cards in September of 2009, we were very excited about Eyefinity gaming technology and how it could revolutionize PC gaming.  At the time it was expensive, DP monitor support was low and the active adapters to make it work with DVI monitors were almost impossible to find.  We were given many AMD’s employees words and told many promises about support and lower cost options coming “very soon.”

About a year later, DP monitors are only slightly more prevalent, the “thin bezel” Samsung displays are just finally trickling into the market and those $100 adapters are still $100 and hard to find.  Sigh.

But good news!  AMD has worked with several companies to produce a lower cost, active DP-to-single-link-DVI adapter that will be for sale very soon (today actually!) for only $30.  The adapter only supports resolutions up to 1920×1200, which should be more than enough for nearly all users and those of you with triple 30″ panels can probably afford the $100 adapter anyway. 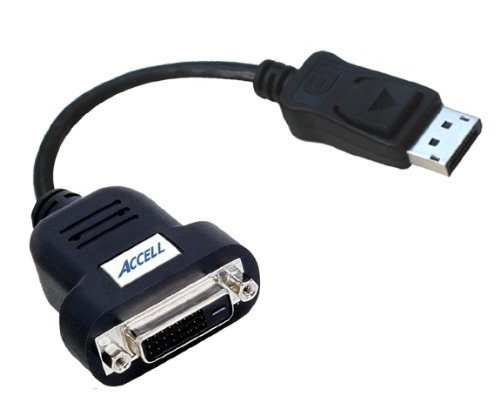 We have this new adapter in house and it is working just fine in our triple panel configurations!  I only wish it were out about 10 months earlier so we could have really driven home the advantages of buying low cost displays for gaming.  Better late than never I guess!  Considering that NVIDIA Surround still requires at least two cards in SLI, AMD’s edge in value for three panel gaming will only increase with the release of these units.

Several partners of AMD will be offering the adapters in one form or another: Sapphire, XFX, PowerColor, Accell, Weison and more.  They will come in both mini-DP and DP flavors with DVI outputs.  Look for them on Amazon.com, MicroCenter.com, NCIX, etc.  The adapters are easy to install, there is no software to worry about so anyone looking for a way to get three panels running on cheap(er) will be glad to see these for sale!