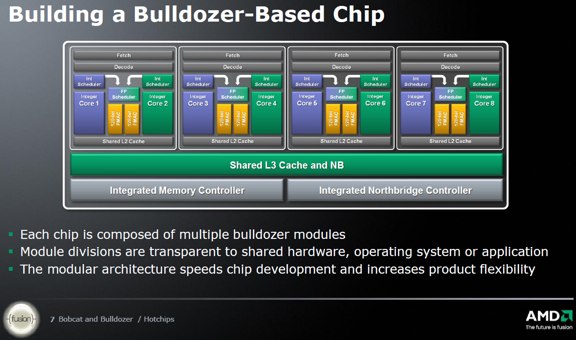 By smartly sharing and beefing up components, AMD is able to double the amount of integer units into a design.  AMD expects around 80% of the performance of a traditional dual core part in about 50% to 60% of the size and power consumption.  This allows AMD to pack 33% more cores and an estimated 50% higher throughput than a current generation Magny Cours for its given die size and power envelope.

The first processors will utilize GLOBALFOUNDRIES’ 32 nm SOI process.  The initial design was taped out in Q2 of this year, and it is quite likely that the first working samples are already in AMD’s hands.  We expect the first products to be released on the server side, with an eventual release on the desktop. 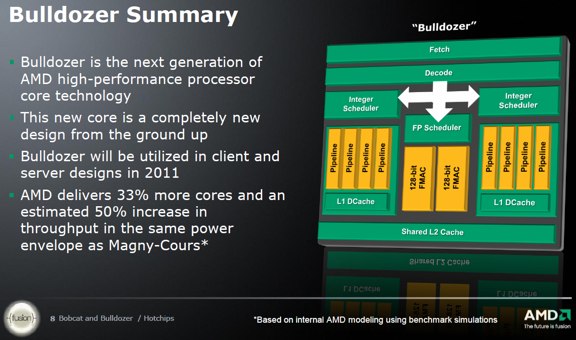 Bulldozer is a brand new processor, designed from the ground up to handle today’s workloads as efficiently and as fast as possible.  Their take on “SMT” is quite reasonable in terms of die space consumed and actual throughput (or so it is assumed).  It is certainly an architecture that looks to be able to successfully take on what Intel has in store for 2011.  Many questions still remain about Bulldozer, and no one outside of AMD knows how well it will scale in clockspeed, power consumption, and per clock performance as compared to Nehalem/Sandy Bridge from Intel.

2011 looks to be a very interesting year for AMD with the introduction of three major products; Bulldozer, Bobcat, and the first Fusion offering.  While AMD retained marketshare in 2010, they are hoping this triple threat of mobile, desktop, and server processors will allow them to grow their marketshare all the while improving their margins.  Bulldozer is a serious big gun, and we here at PCPer hope that we can see it in desktop form sooner rather than later in 2011.