The MacBook of course comes with OS X rather than Windows. It also comes with Apple’s iLife software suite, a set of robust programs that are generally better than the equivalent pre-installed software on Windows systems.  The iLife suite includes iDVD, iPhoto, iMovie, iWeb and Garageband. You’ll also find Apple software such as Safari, iTunes and iChat.

The default OS X settings on the MacBook are frustrating. Despite the MacBook’s small display, OS X is by default set up with the dock (the OS X equivalent of the Windows taskbar) rendered at a large size. Worse, the default settings don’t allow the dock to disappear when not in use. As a result the useful screen space is dramatically reduced. Messing with the MacBook’s settings easily solved this, but it seems a strange stumble for a laptop that is marketed as being an easy-to-use alternative to a PC. I should not have had to make these changes at all, and I am sure there are some MacBook users who continue to give up the bottom eighth of their display to the OS X dock simply because they don’t know how to change the settings.

Below we have the performance tests that show how the MacBook stacks up against competing laptops. 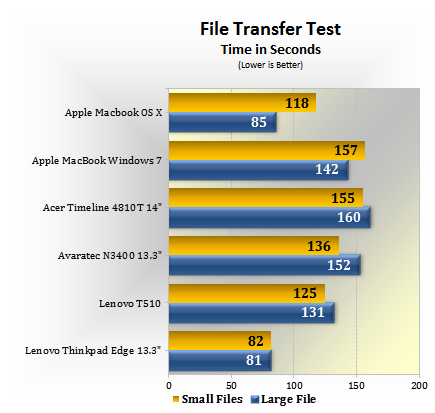 The file transfer test uses two sets of files. The small file test is 557 MP3 files totaling 2.56GB. The second, large file test consists of a single 2.52GB RAR file. The file is copied from one drive partition to another and timed. 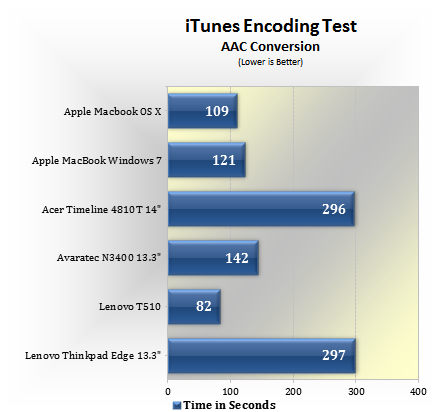 Again, Windows 7 performance was not surprising. At 121 seconds, the MacBook is slightly quicker than the Avartec N3400 (with a 2.16Ghz Pentium Dual Core) and a fair bit slower than the Lenovo T510 (with a Core i7 620M).

Performing the test in OS X again was quicker, although only slightly so. The MacBook absolutely annihilated the Acer Timeline 4810T and the Lenovo Thinkpad Edge, both of which were equipped with Core 2 Duo CULV processors. 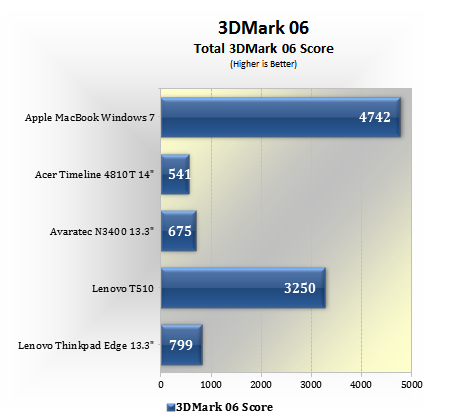 This test used the default settings for 3D Mark 06 and was completed in Windows 7 32-bit (there is no 3D Mark for OS X). The results shows that the integrated nVidia 320M graphics are very powerful, beating the nVidia NVS 3100M (which is roughly equal to the nVidia 310M) by a large margin. This is still not the kind of performance you’ll need to run something like Metro 2033 on even medium detail settings, but it will run less demanding games very well. I was able to play the Starcraft 2 beta on medium detail without issue. Portal and Torchlight also played beautifully.

Given the test results, the MacBook’s overall performance is best described as competitive. The MacBook will lag behind laptops that have Core i3 and i5 processors when it comes to processing power, but will easily outperform laptops using Intel CULV processors.

It should be noted that gaming in OS X is still not always a smooth experience. Although Steam has now been released for OS X, the performance of games is significantly worse than performance in Windows. If you intend to game on your MacBook I suggest that you have Windows installed for your gaming needs. Another potential hitch comes in the form of driver support. The 320M is a unique piece of hardware and unique to the MacBook and 13” MacBook Pro. Driver updates will be sparse, if they arrive at all.