The last MSI product that I was able to review was the outstanding R5770 HAWK, which is based on the AMD HD 5770.  This custom designed part was an excellent overclocker, had tremendous cooling abilities, and really was a very interesting part for the price.  MSI’s version of the GTX 480 is not nearly as interesting as the R5770, but it does feature some distinct MSI flourishes.

This is the “sticker” version of the GTX 480, in that MSI does not have much of a say in the design of the card, since it is based on the NVIDIA reference platform.  What MSI does have control of are the selection of components that go into the card.  While the PCB and cooler design are reference, the particular choice of caps, chokes, mosfets, etc. are determined by MSI and made to their specification.  MSI has a pretty good reputation anymore for using “military class components” in their designs.  These components are of a higher specification when it comes to the ability to work under harsh conditions, and have a longer lifespan than cheaper, lower specification parts.  Harsh conditions in this case are higher operating temperatures, and a higher power draw. 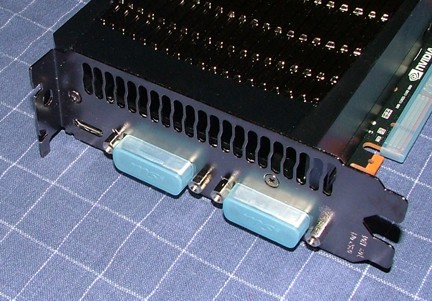 The mini-HDMI port is about the only modern connection that they could fit in after the two DVI ports.  Only two ports can be active at any time, no matter what combination is used.


The reference design was somewhat overbuilt anyway, considering the power draw and heat production inherent in the GF100 chip.  So there is some debate as to what higher specification parts will actually do for the card as a whole.  Personally I would rather be safe than sorry, especially when purchasing a card that is over $400.  In my own machine, I kept an 8800 GTX for nearly two years, a GTX 280 for a year and a half, and only recently upgraded to a HD 5870.  The peace of mind that a better quality build can give is certainly important when using a card for an extended period of time.

The bundle itself is not extensive, but it is adequate.  The card comes with a molex to 6-pin power adaptor, PCI-E 6-pin to 8-pin adapter, a DVI to VGA adapter, and a DVI to HDMI adapter.  Oddly enough, the card comes with a mini-HDMI plug, but no mini to standard HDMI adapter.  The software disk comes with drivers, the MSI Live series of applications (which I have never been terribly fond of), drivers, DirectX installs, MSI Vivid (color correction and enhancement software), and Adobe Acrobat.

The software app that is actually useful and impressive is their Afterburner bundle.  This is based on the popular Rivatuner software, but has been specially made for MSI.  It has a fairly unique graphical interface that is easy to read and adjust.  The software package also allows the overvolting of the GPU.  Afterburner also includes the ability to adjust the fan settings, as well as program the temperature points where the fan will speed up.  This should allow users a bit more flexibility in how loud their fans get during certain gaming situations.  The monitoring portion is also a strong point, where voltages, clockspeeds, and temperatures are all reported on in realtime.  5 different overclocking profiles can be saved in the application, which is a nice nod to motherboard BIOSes which have featured this for some years now.

Unlike the AMD HD 5870, the back of the board is bare so all the dirty secrets of this board are revealed.  Note the two cut outs to allow better airflow into the squirrel cage fan.

Afterburner also has a burn-in and benchmark mode.  Burn-in uses their own edition of Furmark to really stress the GPU, and look for errors (or causing the GPU to go into a low clock state due to power consumption).  The other is a benchmark which will show a user what kind of performance gains a user can expect through overclocking.  This application can work with multiple GPU systems, and clock the different cards independently if needed.

MSI also includes a “Pick Your Poison” game pack, which gives the user a chance to download one of three full games for free.  Currently it features “Dark Void”, “Street Fighter 4”, and “Resident Evil 5” as the options.  NVIDIA and its partners have also been pushing other games through the retail system.  Unfortunately, deals such as a free copy of “Just Cause 2” have expired, but eagle eyed individuals can keep a good look out for future specials bundled with the latest NVIDIA video cards.  Apparently “Metro 2033” will be included soon with many Fermi based cards in the near future.

Currently this board sells for around $429 after MIR.  This is a full $70 less than the introductory price of $499 for these cards.  After seeing the performance and usefulness of the card, I think that it is a very fair price for a single GPU card of this class.  It is also a far cry from previous years when the high end single GPU part was selling for $599 and above.  Also considering that it features a very generous 1.5 GB of GDDR-5 memory onboard, the price really is not that far above that of the competing HD 5870 (around $389 and has 1 GB of memory).