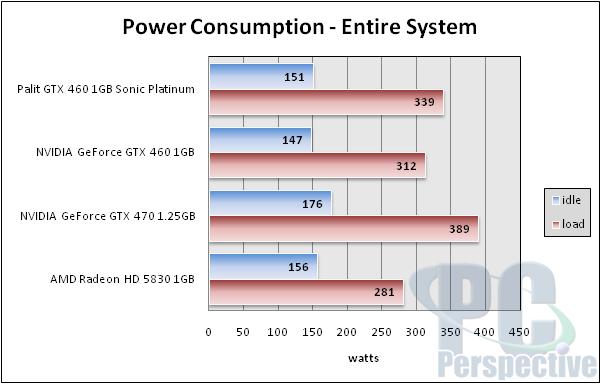 With overclocked settings like the ones found on the Palit GTX 460 Sonic Platinum you can be sure you are going to see power consumption increases as well.  In our case here you can see the overclocked version of the GF104 uses about 27 watts more power than the standard reference clocked card under a full load.  That might not seem like much but considering the TDP of the card is 160 watts, that is about 20% additional power.

Also worth noting is the increase in power consumption you get with the GF100-based GTX 470 card – it still uses 50 watts more than the overclocked Palit GTX 460 and in only one of our games (Metro 2033) did that power consumption difference equate to actual real world gaming benefit.

Obviously the performance of the new Palit GeForce GTX 460 1GB Sonic Platinum edition graphics card impresses the hell out of us.  We have quickly seen the GTX 460 and the GF104 GPU develop from a basic mid-range product offering to a clear market differentiator in a very short time after release.  NVIDIA was pretty conservative it seems when it came to setting the reference clocks for this GPU; likely simply because they didn’t want to cannibalize both the GTX 465 and the GTX 470 in the process. 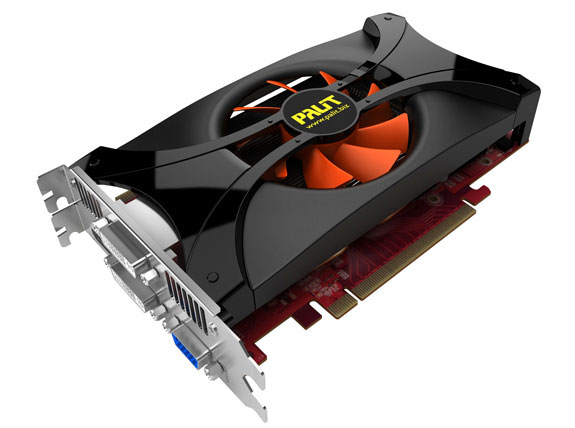 Regardless of what NVIDIA wanted, the fact is that these types of overclocks are not only possible but their card partners are going out of their way to promote them and the GTX 460 is quickly becoming the most popular GPU on the market.  The only issue for me comes with Metro 2033 and the fact that performance between the GT 470 and the GTX 460s are so dramatically different.  We are still trying to dive into exactly what is going on here but there is obviously one or more architectural differences that are affecting the performance of the game at these quality settings.

UPDATE: It appears that the issue here is with the tessellation engines in the GF100 versus having only half as many in the GF104.  This gap would be visible in other heavily tessellated scenarios like the Stone Giant and Heaven benchmarks and probably in the upcoming Lost Planet II.

The only really differentiating feature on the Palit GTX 460 Sonic Platinum card besides the overclocked settings is the inclusion of four display connections on back panel including a pair of dual-link DVI ports, a VGA port and an HDMI port.  The VGA port might seem useless at first but users that want to connect their PC to their TV will likely find it handy to have without the need for another adapter.  You can still only connect TWO displays to the card at any one time, but more options are always better.

We already went over the features of the GeForce GTX 460 in our original review, but something to consider for a GTX 460 SLI configuration against the GTX 480 – with the two 460s in your system you have the option to run NVIDIA Surround – something you cannot do with a single GTX 480.

Here are the current “reference” MSRPs for the cards in debate today:
The Palit GTX 460 1GB Sonic Platinum model is currently selling for $249 making it $20 more than a reference 1GB card; not too bad at all considering the warrantied overclocked settings you are getting.  Another debate is whether or not you think moving from the $250 Palit GTX 460 overclocked card to the $299 GTX 470 is a worthwhile investment.  We already demonstrated that most games show these two cards to be running neck and neck except in Metro 2033 – and possibly other games we haven’t tested yet.

Palit has done a great job combining the popular and flexible GeForce GTX 460 GPU with a custom design and highly overclocked settings to create a mid-range graphics cards that offers next-level performance for a price that is much more manageable for the everyday gamer.  If you have been looking for an upgrade path in the $250 price range then the Palit GTX 460 1GB Sonic Platinum card is a fantastic option!