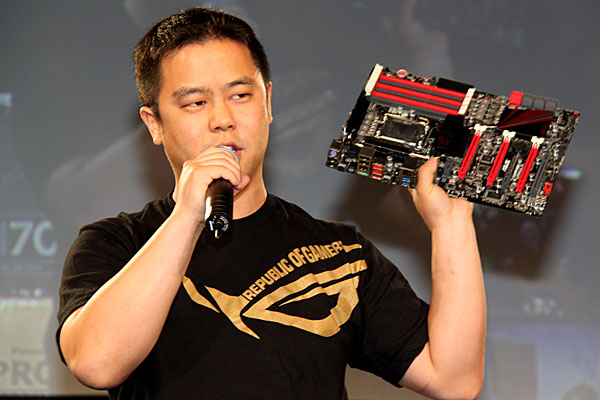 Brian from ASUS went over the entire line of Republic of Gamers motherboards and showcased a new board called the ROG Rampage III Formula. This is the first time ASUS has shown this X58-based board in the U.S. too. 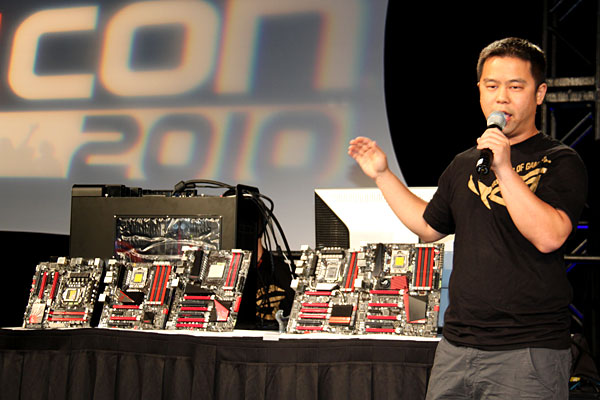 Brian also discussed the Republic of Gamers Tour and discussed how they are working with gamers to let them know the benefits their product line provides. The tour included information on overclocking, folding at home, and case modding. 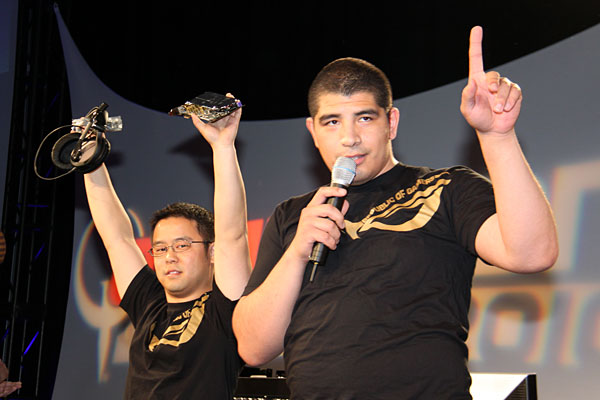 ASUS also showcase a new sound card called the Xonar Xense that’s not even released to the public yet. They worked with Sennheiser to develop a special headset they could bundle with this card. They even gave it to a lucky attendee who was able to name every motherboard in their line of ROG boards. Brian also said this card/headset combo would be available for about $300 when it’s released. Very cool. 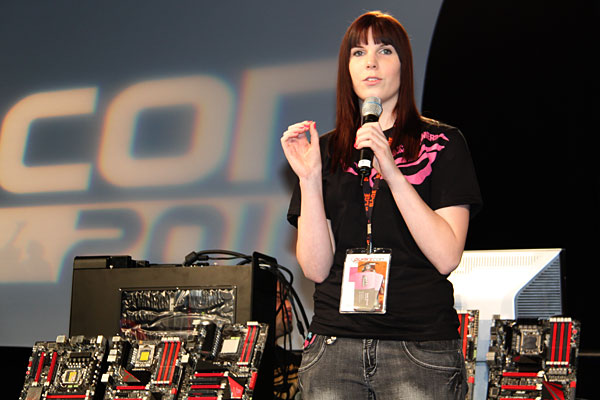 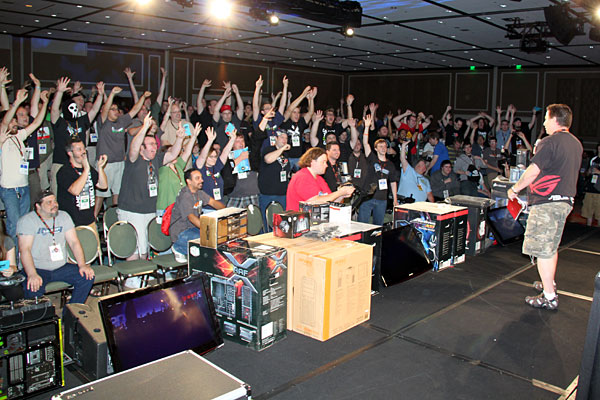 ASUS worked with Digital Storm to put together a custom gaming system with an i5-655k, Swifttech watercooling, Corsair SSD, 4GB DDR3, Corsair 1200W modular power supply, and GTX460 video card, that they gave away at the workshop. To win the rig, someone had to catch the Maximus III Gene user manual you see in his hand in the picture. One lucky guy actually caught in fully intact and took home the case. 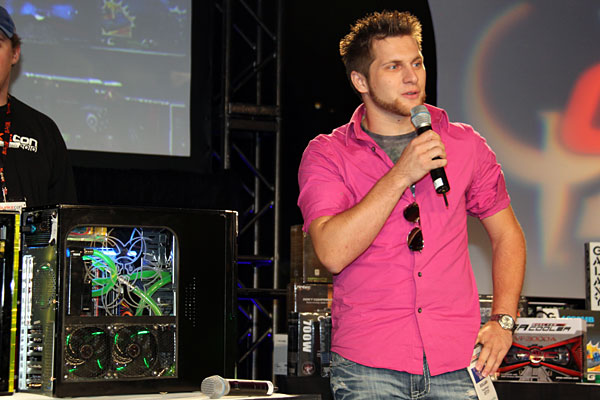 Hunted DeToy explained the history of this ancient Aspire case that he turned into a watercooling beast. This mid tower case features two double radiators and one single radiator to cool his CPU and graphics cards. Everything is completely internal, which by itself is a difficult and challenging mod to attempt. 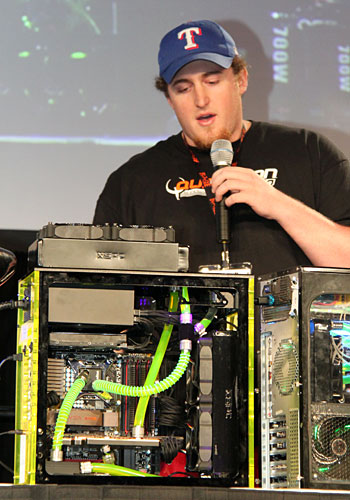 Duncan Lassiter used a Danger Den case and creased more watercooling goodness with two massive double radiators and fans. The most unique aspect of this case was the custom light system that could be modified with a touch of a button. He also integrated the lighting system into his keyboard to have the same effect on both components. 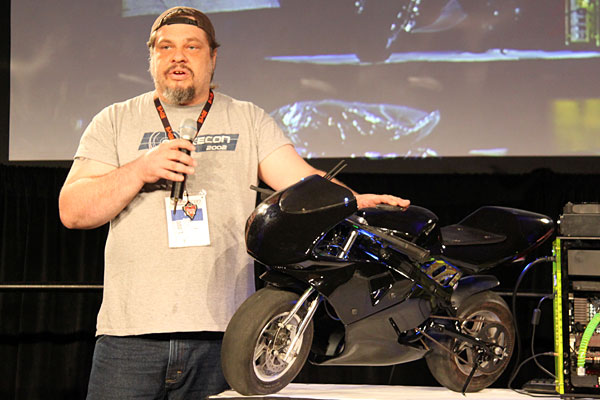 Tom Davis converted this mini motorcycle into a fully functioning PC by adding a VIA mini ITX motherboard and other small form factor hardware while still keeping the bike intact and ridable. He also plans to add an LCD display to the front of the bike to complete the overall look and theme. 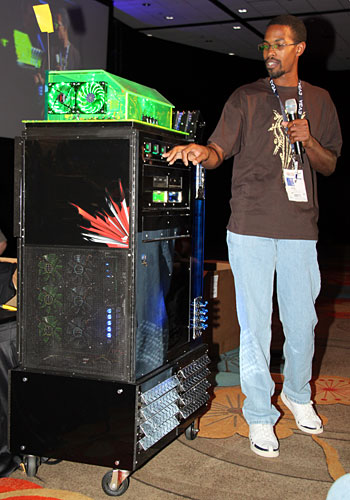 Derrick “DuoPlus” Jackson, one of our finalists from last year’s case mod contest, came back with a totally new case that features two full PCs, nine hard drives, mini fridge, water cooling, and two uninteruptable power supplies at the bottom of the case. He built the entire case from scratch and said he spent more than 300 hours building and perfecting this masterpiece. 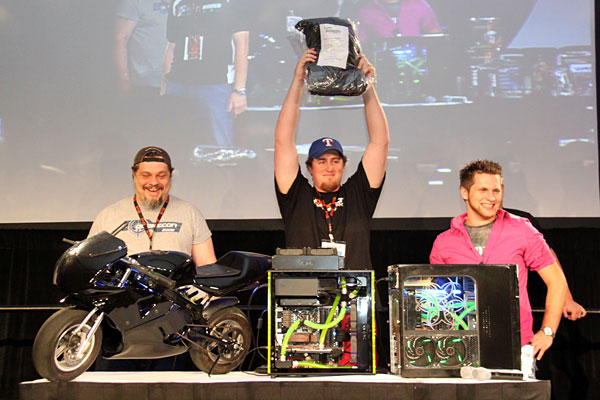 In the pre-fab category, the audience chose Lassiter and his custom Danger Den case as the overall winner. Here he is holding one of the coveted NVIDIA snuggies that everyone was raving about at this year’s Quakecon. He also took home a ton of hardware including a GTX 460, CoolerMaster 1000W power suppy, Corsair SSD, and a Corsair H70 watercooling unit. 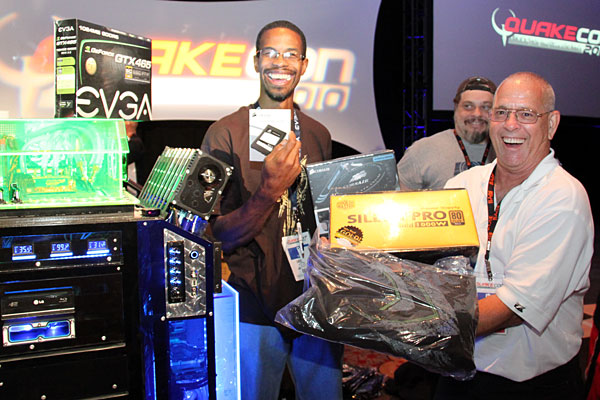 Jackson easily took top honors in the custom built category and received tons of hardware and swag for his efforts. Both overall winners also received raffle tickets for a chance to win one of the 2011 Ford Shelby Mustang GT500 Coupes.