Speed Bumps (and more) for Everyone!

AMD again refreshes its lineup with a speed bump, but it also throws a couple new wrinkles. The Phenom II X6 1075T is not a speed bump, nor is it unlocked, but it helps to flesh out the X6 family of parts at $245 US. AMD also introduces a new barnburner with the Phenom II X4 970. The Phenom II X2 560, Athlon II X4 645, Athlon II X3 450, and Athlon II X2 265 round out the collection of parts. Each is unique in their own special way, and we test every one.

While all the talk surrounding AMD as of late has been about Fusion and Bulldozer, AMD is still improving and upgrading their current lineup of processors.  While the Phenom II products are the top end units, AMD is making a decent living off of the much less expensive, yet still quick, Athlon II series of products.  Today AMD is releasing nine new processor SKUs, six of which are reviewed here. 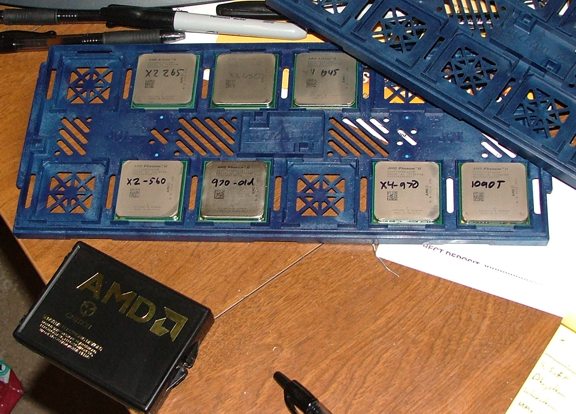 The only chip missing from the lineup is the X6 1075T… because it is in the computer running benchmarks as we speak (or at least take pictures).  AMD initially sent an early version of the X4 970, but they quickly put out a new stepping which improved overclocking and ran cooler.  These are the ones which will show up in retail.


The mix today includes three new Phenom IIs, and three new Athlon IIs.  The three “e” series of processors, the X4 615e, X3 420e, and X2 250e are not going to be readily available in retail.  Most of these products will be shipped to OEMs to include in smaller, cheaper, lower profile machines which will require the lower TDP parts.  Each of the “e” series of parts is rated at a cool 45 watts TDP.

The other new parts are a nice mix that increases clock speeds all around, and in one case is the long awaited new member of the X6 club.  AMD certainly is not standing still and waiting for Ontario/Zacate/Llano to drop.  These new SKUs will replace the previous high end parts in terms of price, which will drive the prices on current parts down as well.

While GLOBALFOUNDRIES is now its own company, AMD still holds a small stake in it.  Also, AMD is GF’s primary partner.  The mentality at GF has not really changed much since it was acquired by ATIC, and merged with Chartered Semi.  They are constantly tweaking and improving upon their process technology.

This was the cornerstone of AMD’s manufacturing philosophy.  AMD simply did not have the funds to create, troubleshoot, and ramp up a completely new process node filled with new materials and optical tech.  Instead, AMD took a more piecemeal approach to process technology.  By implementing new technology at a slow, but steady pace, AMD was able to keep up with Intel fairly well, without having the necessary treasure chest of capital to invest in a new process node.  When AMD does introduce a new process, it rarely is much faster than the previous node in terms of transistor switching performance and power consumption.  It is not until the process is about a year old that we see some significant strides. 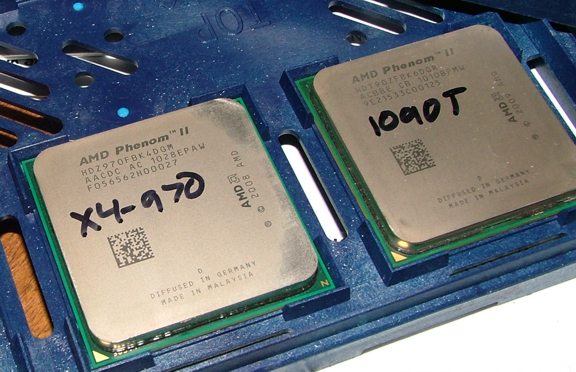 In many ways, the Phenom II X4 970 is the star of this launch.  Sitting next to it is the older X6 1090T, which previously garnered much of the attention of AMD enthusiasts.


Needless to say, GLOBALFOUNDRIES’ 45 nm SOI node is a lot more advanced now than when it was initially introduced with the Shanghai and Deneb processors back in late 2008.  Remembering way back when, the first Phenom II to hit the streets was the AM2+ based Phenom II X4 940 BE clocked at 3 GHz.  This was running at the standard 125 watts TDP.  It could overclock to 3.6 GHz fairly easily, but unless a lot better cooling was used (as in water cooling, LN2, etc.) then it wouldn’t go much higher.  Now we are seeing larger, more complex parts with the X6 products reach 4 GHz overclocks quite easily, and still retain the 125 TDP rating at stock speeds up to 3.2 GHz.

We likely will not see many performance improvements on the aging 45 nm process, as GF is concentrating on getting 32 nm up and running effectively.  We probably will see one more speed bump before the next generation products hit the shelves from AMD, but from here on out the primary focus will be Llano and Bulldozer.