The 890FX chipset is composed of the 890FX northbridge and the SB850 southbridge.  The 890FX northbridge is very similar to the earlier 790FX, but with one major change.  It supports a virtualization technology called IOMMU.  This is a hardware function which allows less processor overhead when sharing IO requests among VMs.  It is a 65 nm part, and it contains a total of 42 PCI-E 2.0 lanes for use around the motherboard.  The new SB850 southbridge is also a 65 nm part, but it includes the heavily redesigned SATA controller, making it the first native SATA 6G chipset solution.  So why are these parts still 65 nm and not 55 nm or 40 nm?  Well, this is primarily due to their size.  Going to a smaller process would actually shrink these chips too much, and there would not be enough pads for data and power connections to the substrate.  Plus, the chips do not eat all that much power, and their TDPs combined are less than 20 watts. 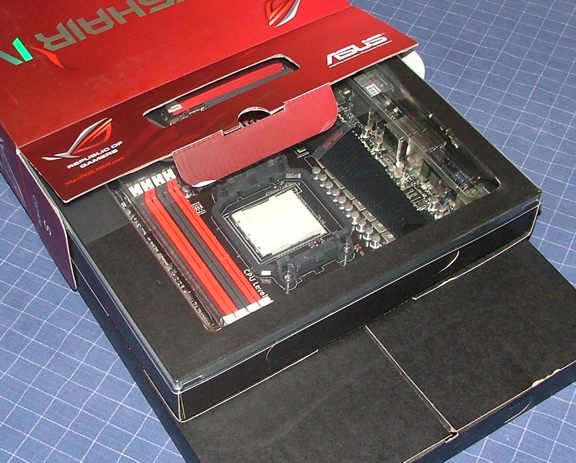 Asus is very environmentally conscious with their packing.  The second box holds all the necessary accessories.


While the northbridge does not add a tremendous amount of features, the new southbridge does provide enough to give manufacturers an awfully good excuse to refresh all of their AMD based solutions.  We started out a few months ago with the 890GX boards (essentially a higher clocked 785G chip combined with the SB850) and we have now moved onto the 870, 880, and 890FX products.

This is one of the latest R.O.G. (Republic of Gamers) branded board from Asus, and it looks to build upon their reputation of designing a well featured and highly overclockable motherboard.  While I was not particularly impressed with the previous 790FX ROG board, it was a fairly popular and affordable high end board for the AMD market.  It seems as if Asus has taken a very good look at what was wrong and missing from the Crosshair III Formula.

The first thing we notice is the abundance of PCI-E 16X slots on the board.  Four of them are in attendance, and up to three can be used with dual slot graphics cards in CrossFire X.  Interestingly enough, there are no PCI-E 1X or 4X slots on the board.  There are, however, two standard PCI slots, which are nice to have considering that until recently most high end sound cards still used that connection.  We also must consider how many wireless networking cards still use PCI. 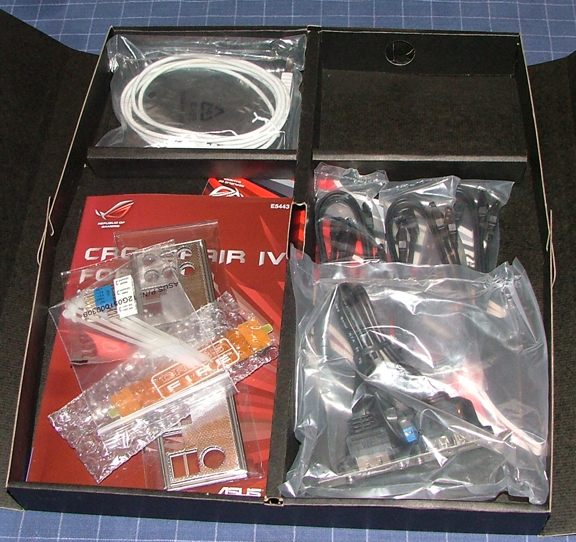 
After the multitude of PCI-E slots, the next thing most people notice are the large and interestingly angled heatsinks that cover the chipset and mosfets on the board.  These large, black heatsinks do a terrific job of cooling the board without the use of fans.  They are all three connected via heatpipes, and under no circumstances did these get remotely hot during use.  At first I was a little put off by their design, but it grew on me.  The only issues I have with the heatsinks are that if a large CPU cooler is installed, it can have trouble fitting into the space allotted.  As long as the heatsink follows AMD’s recommendations for footprint size, this isn’t a problem.  The second issue is that the mosfet sink on my sample was far too close to the 8 pin 12 volt CPU connection.  I had to really force the plug in there due to spacing limitations.  I have been assured by Asus that this has been addressed in the shipping versions of this board.

The third impression a user gets is the coloring of the board.  We see that it is dominated by black, red, and silver colors.  These strong, primary colors do make the board look pretty bad-ass, which is a consideration for those who prefer windowed cases.  There are no blues, light blues, or fuchsias to contend with.  It is in direct contrast in ways to MSI’s 890FX product, which features black, blue, and titanium coloring.  While MSI features a darker, yet cooler color palette, Asus goes with a more aggressive and energetic scheme with the use of red.  This is obviously window dressing, as colors do not affect the performance or stability of a motherboard. 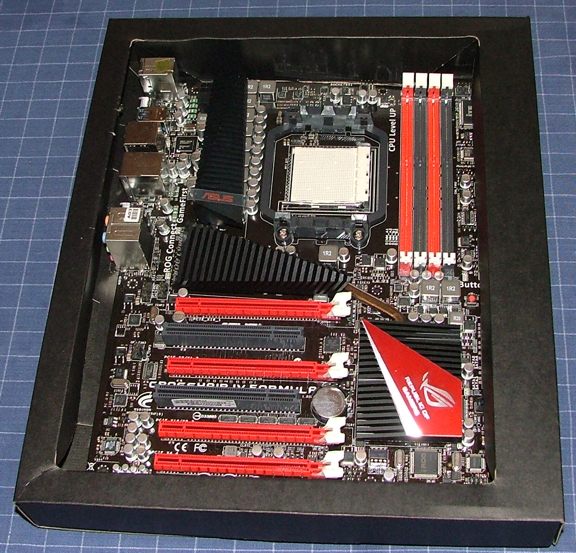 Oddly enough there is no pink cushion under the board.  Just warm, easily deformable cardboard.


Heading into the more technical realm, the power circuitry is a tried and true 8+2 phase affair.  The board does not utilize the High-C caps that MSI is really pushing on their high end boards, but Asus does use solid/polymer caps throughout the entire board.  The chokes are the now very common solid, ferrite chokes which run cool and don’t have the annoying buzz that older chokes were prone to.  8 phases are routed to the CPU (the modern AMD CPUs have split power planes between the individual CPU cores and the uncore/northbridge portion), while the other 2 supply the memory with power.  The board also features 2 oz. of copper, rather than standard 1 oz of older motherboards.