The board does not support either a floppy connection or IDE ports.  This is all Firewire, USB, and SATA throughout.  The board features the 6 SATA 6G connections from the SB850 southbridge, as well as an eSATA and internal SATA 3G connection via a J-Micron controller.  USB 3.0 is also in attendance, and it is provided for by the NEC USB 3.0 controller that seemingly has taken over the marketplace.  Currently no native core logic chipset supports USB 3.0, but we can expect support from AMD in 2011.  While this does drive the overall price of the board up a few dollars, NEC’s implementation is no slouch when connected to PCI-E 2.0 enabled chipsets. 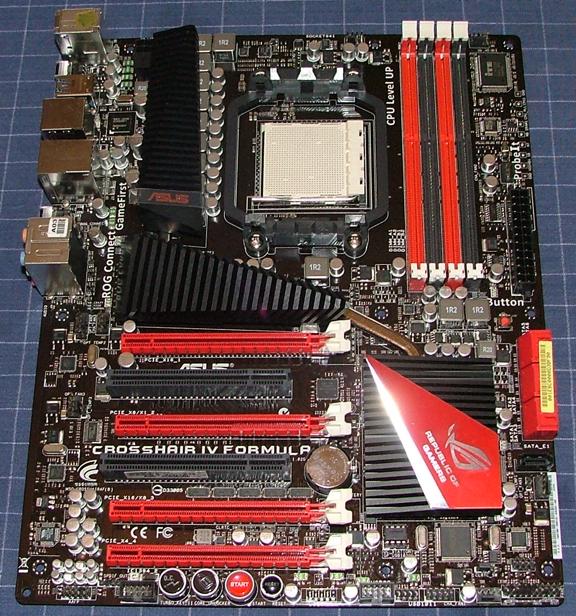 The board in all its black/red/silver glory.  And caps.  And chokes.

I am somewhat of a closet audio enthusiast, and when I first heard that this board would have an X-Fi based sound chip, it piqued my interest.  After opening the box though, and taking a good look around, I was sorely disappointed to find out that the SupremeFX X-Fi functionality is merely a software layer.  The actual sound codec is based on a VIA 24-bit codec, which features none of the X-Fi DSP functionality onboard.  EAX 4.0 is supported through software, which leverages the CPU for its advanced functionality.  A few years ago this would have been a deal breaker, but with inexpensive multi-core CPUs, users are actually looking to more effectively load up their processing potential.  As long as users go in not expecting to get an actual X-Fi based hardware solution, they should not be too terribly disappointed.

There are five buttons of interest on the board.  The first four are located at the bottom of the board, and they include; Core Unlocker, Automatic OC, Power, and Reset.  Next to the memory slots is the “Memory OK” button, which is used to reset all memory timings to stock/auto settings and is designed to increase memory compatibility when swapping around modules.  The Power and Reset buttons are self explanatory.  The Core Unlocker uses an actual chip on the motherboard to unlock disabled cores on AMD processors since the SB850 southbridge no longer supports the ACC functionality.  The Automatic OC button can be pressed down and enabled before bootup, and once the motherboard automatically overclocks itself, the button can be disabled (otherwise if it is continuously depressed, every boot will result in a new overclock attempt instead of using previous settings). 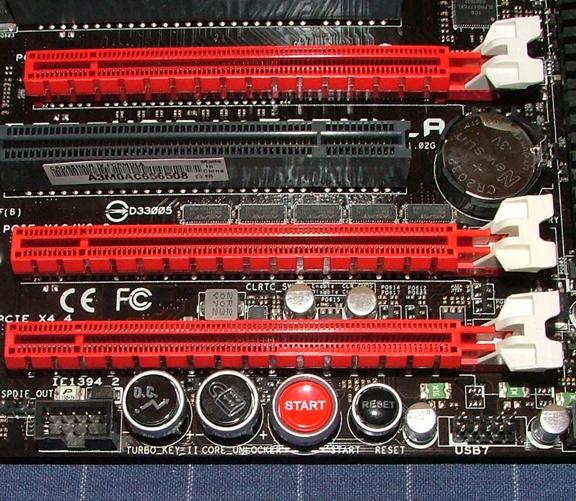 Four buttons out of five ain’t bad.  Do not expect to easily access these when doing 3x CrossFire.


The board is covered with LED lights which not only brighten things up, but can give the user a lot of pertinent information.  First off, there are LEDs which light up during boot, and if a boot fails then these can inform the user where exactly the problem could be.  Next off are more LEDs spread throughout the board which represent the voltage being delivered to the major components.  Once these blue LEDs turn red, then the user knows that they could be applying too much voltage to said components.  The board also includes 7 measuring points where a voltmeter can be used to ascertain the correct voltage being applied to components around the motherboard.

Asus includes “Game First” technology, which is a software/hardware addon which handles packet priority.  If a user is downloading something, Game First will recognize the difference between the packets being used for a multiplayer game, and those that are based on whatever torrent is being downloaded.  This of course only is really effective if the machine using this motherboard is actively sharing files with the outside world, as other routers and connections are not QOS aware down the stream. 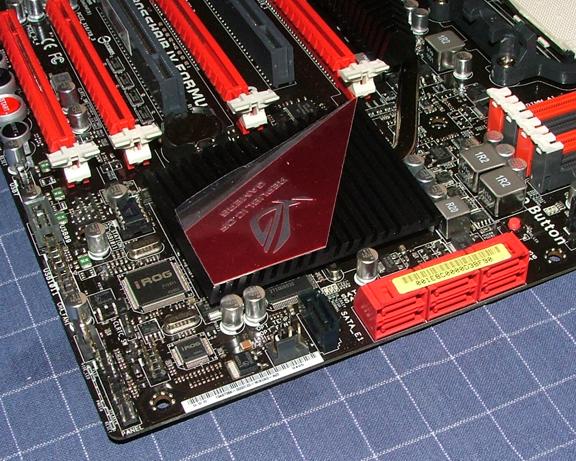 The “southside” or “business end” of the board.  Either way, it is the only place to plug in your cables.


ROG Connect is one of the more interesting aspects of this board.  In ways it is somewhat gimmicky, but in others it is pretty cool.  A USB cable is connected to the back plate of the motherboard, and then connected to another computer.  That other computer loads up the ROG Connect software, and it instantly has the ability to adjust all of the hardware settings of the Crosshair IV motherboard.  There are two primary reasons why a user would want to do this.  The first being that if/when the Crosshair IV motherboard locks up, the user can see exactly what settings were enabled from the non-locked computer, and adjust them accordingly to get the machine stable.  The second is if a user wants to attempt some world record attempt at overclocking and performance, and doesn’t want the slight overhead that the Asus Turbo-V utility incurs on the CPU, then they can use ROG Connect to overclock in a software type environment, without impacting CPU performance for the benchmark being performed.