At IDF this week, Intel is revealing much more information about the new Sandy Bridge processor architecture and one of many interesting features is a new version of Turbo Boost and how it functions with the platform. After spending some time with a handful of engineers and asking about the next-generation Turbo Boost technology, I think we have a good grasp of what it is, how it works and how it affects many different aspects of the new Intel platform.

With the introduction of the Nehalem architecture in 2008, Intel started a technological shift that would dramatically change the way desktop and notebook processors function and perform for the user.  The idea was so simple that it makes us wonder why no one had come up with it earlier in the multi-core race.

With a multi-core processor, Intel decided to intelligently utilize the power envelopes of the total CPU package in a way that allows for frequency acceleration depending on the current state of the software workload.  If only two of the four cores on a Core i7 processor of today are being utilized, then the processor logic knows that it has “thermal envelope” to work with and will increase the clock speed of the two active cores to improve performance for as long as that state remains the same.  If only one core is active, the frequency could then increase another step or two (133 – 266 MHz).  When all four cores are loaded, the processor would run at its specified clock speed where the thermals were rated and tested at.

In practice, Turbo technology from Intel ended up being much less dynamic that we thought it would be over the life of Bloomfield, Lynnfield and then Clarkdale.  The states were very repeatable and very predictable – something that Intel still indicates is one of the goals of the technology.

At IDF this week, Intel is revealing much more information about the new Sandy Bridge processor architecture and one of many interesting features is a new version of Turbo Boost and how it functions with the platform.  For several hours all the detail Intel would give us is that the new Turbo mode “gave users a boost in responsiveness when they need it most.”  There were also several references to the CPU having this ability for 15-20 seconds; needless to say I was incredibly curious what all of this actually translated into from a technical angle.

After spending some time with a handful of Sandy Bridge engineers and specifically asking about the next-generation Turbo Boost technology, I think we have a good grasp of what it is, how it works and how it affects many different aspects of the new Intel platform.  It turns that Intel has enhanced the way the theories of Turbo Boost are applied to the real-world scenarios.  I have created a handful of diagrams to try to visualize the difference.

In this image the bottom line is the starting power, the CPU or individual core at idle power consumption, temperature and current draw.  The top line is the processor TDP, thermal design power, or the maximum thermal envelope that Intel has rated the processor to operate at safely without affecting lifespan or performance.

On the left hand side you see a line graph listed at Nehalem and it shows how Turbo mode operates with current versions of the Core i3/i5/i7 CPUs: when the internal controls decide that a bump in frequency is permitted and allowed, the CPU increases the clock speed instantly and then the Turbo algorithm assumes that the new thermal level of the processor is reached instantly.  If a CPU with one core active is running at 40 watts at 2.5 GHz and then Turbo Boost decides to set the frequency at 2.8 GHz / 50 watts, the CPU assumes that the new thermal levels of 2.8 GHz are current in place and the algorithms continue.

But in the real world, that is not scientifically accurate.  In fact, what really happens is what the curved line labeled Sandy Bridge symbolizes.  When the 2.5 GHz CPU is boosted to 2.8 GHz, the frequency and power draw change instantly but the temperature on the die does not; it rises over a period of time and then settles at the new level.  The next-generation Turbo Boost technology takes advantage of this knowledge and actually increases frequency more aggressively during this period of ramp.

In this period of time, that I have labeled ‘S’ above, Intel has decided that they are able to raise the Turbo Boost frequencies even further than the TDP might otherwise allow.  So while CPU TDP might limit a CPU frequency to 3.2 GHz when running continuously, it might be able to run at 3.6 GHz for a period of time, while the temperature ramps up to that TDP.  Once that TDP is reached the Turbo Boost technology will lower the frequency back to that 3.2 GHz level. 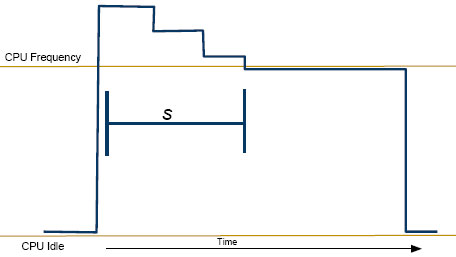 Intel isn’t talking about any specific speed jumps for this new Turbo technology yet, but the above diagram shows you how the speed increase could be applied during that same time period, ‘s’.  The line labeled CPU Frequency is the maximum frequency based on continuous usage and the graph reaching above that for a time is the next-generation Turbo Boost at work.  This is where Intel is claiming that users will get a “boost in responsiveness” when they need it; for example when you open an application, open a complex save file or start a heavy transcode operation.

While you might think that this time period ‘s’ would be variable depending on the system specifications, cooling and platform options, that turns out to not be the case.  Intel has actually specified that the limit on this “extra boost” is going to be 25 seconds.  This apparently is the time that Intel’s engineers and QA team has decided that the voltage/power increase required to reach the higher frequencies can be run on Sandy Bridge before the temperature will exceed the TDP of the silicon.  After that 25 second period the frequency will drop but it will still have the ability to reach those higher speeds again after a certain amount of time.