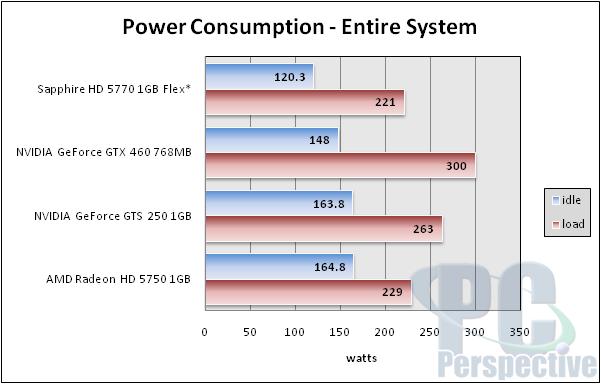 First, a word of warning: the new Sapphire HD 5770 Flex was tested with a different power supply than the other cards in this graph and that will throw off the idle results quite a bit.  However, based on our internal testing, the load power consumption is within about 15-20 watts of the previous version making the HD 5770 still much more efficient than the GTX 460 card from NVIDIA.


The new Sapphire Radeon HD 5770 1GB Flex card wasn’t meant to set any kind of records in the performance world.  It was running at stock clock speeds for the GPU as of when it was released last year.  That being said the HD 5770 is still a great mid-range graphics card that as recently started seeing prices drop into the $130-140 range making it a better than ever.  The lowest priced GTX 460 768MB card from NVIDIA’s partners is likely to run $190 and while it does perform noticeably better, that kind of price increase will likely upset the balance of costs for some gamers looking at these cards.

There is also the threat of the rumor NVIDIA GeForce GTX 450 card and how it will stack up to the HD 5770 and the rest of AMD’s lineup in the coming weeks.  We really don’t know much about the details of the card, performance estimates or pricing so as with most things in the world of enthusiasts and DIY computer builders, it’s buy with caution.

Obviously the big feature here with the Sapphire Radeon HD 5770 1GB Flex card is the “flex” in its name – the ability to support triple 1920×1200 displays in an Eyefinity configuration without the need for an expensive active adapter.  Sapphire unique board design and implementation of the Analogix 9830 chip creates the first such card to do so and we are curious when and if other board partners will be following suit.  With AMD’s recent pushing of a $30 single link active adapter the need isn’t as great as it was when the only option was a $100 adapter, but saving $30 is still nice. 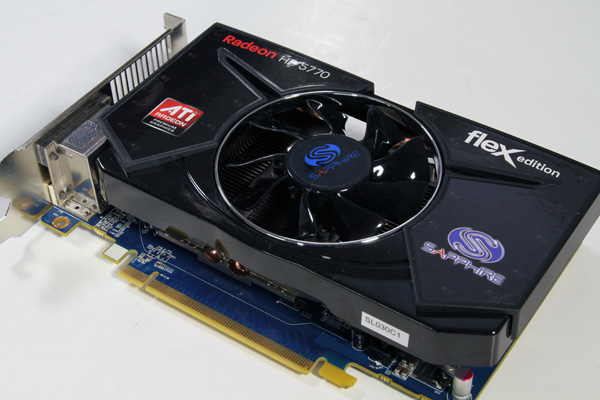 Let’s not forget the rest of the HD 5000-series features including CrossFireX multi-GPU support, integrated audio controller and HDMI audio output, DX11 and more.  Even though NVIDIA has definitely caught up in the race with DX11 support AMD’s feature set continues to be well maintained.

Here are the current “reference” MSRPs for the cards in debate today:
Obviously the Flex version of the HD 5770 from Sapphire will be just a tad more expensive but is otherwise right in line with what we expect in a price to performance comparison here.  It is definitely faster than the HD 5770 and GTS 250 yet slower than the GTX 460 and the segmentation works out.

Sapphire is the first to market with a truly unique version of the Radeon HD 5770 that allows users to integrate an Eyefinity gaming solution without the need for an expensive active adapter.  The custom design and unique implementation make this probably the best HD 5770 on the market though I still feel the feature would be better served on a higher end graphics card like the HD 5870.  If you are comfortable with some overclocking on your own though you can push this HD 5770 a bit further to get more value of your dollar and I think you’ll be very happy with your GPU purchase in this sub-$150 market.