For the performance testing portion of our review, we used the Rovio in various environments over our local network as well as over the internet from our MyTouch 3G smartphone. We tested the Rovio under low light, studio light, and natural light conditions to get an overall view of how well the camera functions as well as how it streamed over our network and internet. We also tried the various movement controls including adjusting the head of the unit to check our responsive it was during operation. 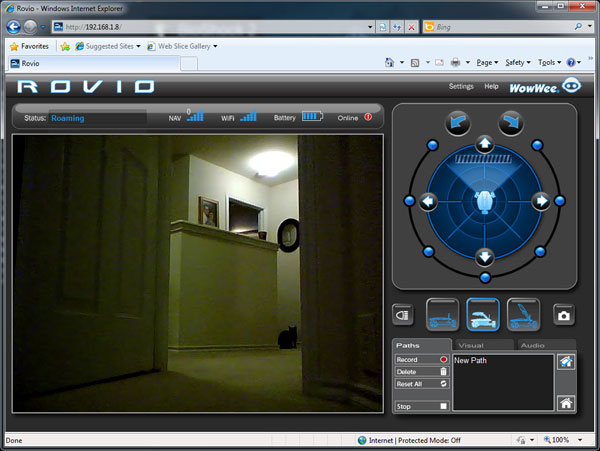 Our low light testing actually worked a little better than expected for a 640×480 VGA camera. There was a bit of pixelation in the dark portions of the image, but we were still able to make out where we were in the room and navigate through dark doorways. We did notice that the video quality became a bit choppy at times, but overall it worked well and we were able to accurately navigate the top floor of our home with ease. 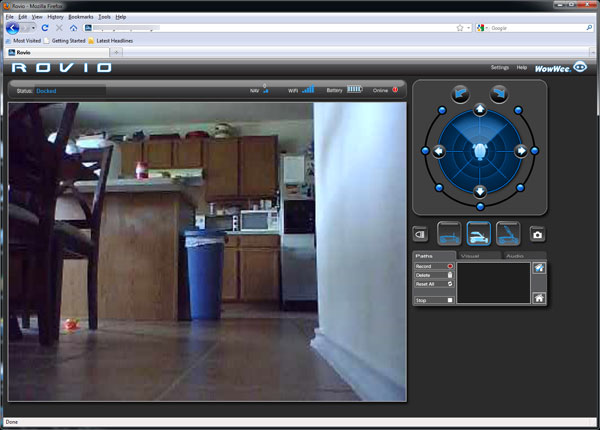 Under natural light conditions, we opened up every window in our kitchen and living room to let as much natural light in as possible. Our natural light testing recorded some of the best video quality we saw during any of the conditions we tested. There was some pixelation and choppiness during playback, but the sharpness and clarity was almost spot on throughout our natural light evaluation. If we had any complaints during testing, it would have been the studdering of the video streaming over our local network. I’d expect some bandwidth issues accessing the Rovio over the internet and trying to navigate, but we shouldn’t have noticed much lag over our local network. One theory is the wireless g configuration, but that wireless standard yields more than enough bandwidth for 640×480 video. 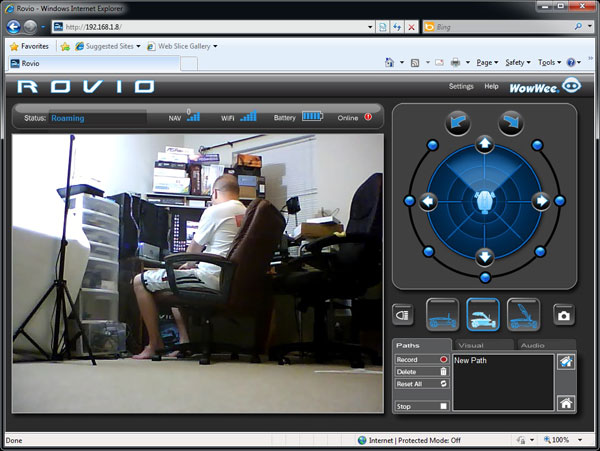 The last portion of our performance testing involved using the Rovio in my office under studio lighting conditions. I turned on two 65w general purpose studio light bulbs and started to record video and navigate my office with the Rovio over my local network. Needless to say, the video quality was even better than when I used this device with natural light. As with many webcam devices, the amount of good lighting can really dictate the quality of the video as well as clarity and sharpness of the recorded image. If you don’t have studio lighting, the small LEDs on the Rovio will help illuminate the path for the device to broadcast a clear enough video signal so you can check your home when you are away on business or just at another location. 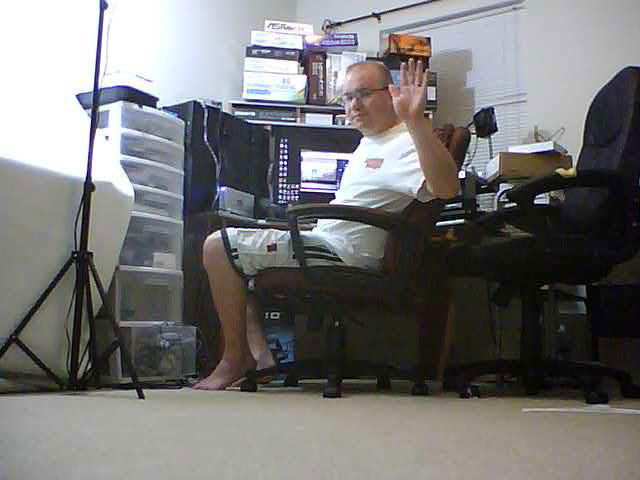 One final feature we wanted to evaluate was the snapshot function on the Rovio. The quality of each snapshot is only 640×480, so as you can see from the image above there isn’t a lot of sharpness or crispness to this image at all. The lighting helped the Rovio snap a better lit image, but the quality itself suffers because of the camera’s low resolution settings. 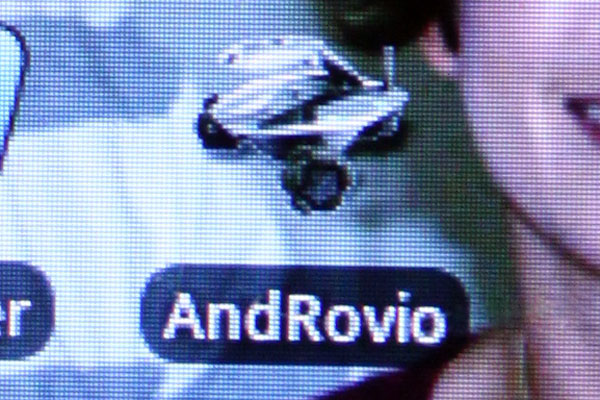 The final part of our performance testing involved purchasing the AndRovio Android application for our my MyTouch 3G smartphone. This application is available for $4.99 on the Android Market, so we bit the bullet so we could test it out for this review. For those who need to know, my smartphone is running Android 1.6 (Donut). 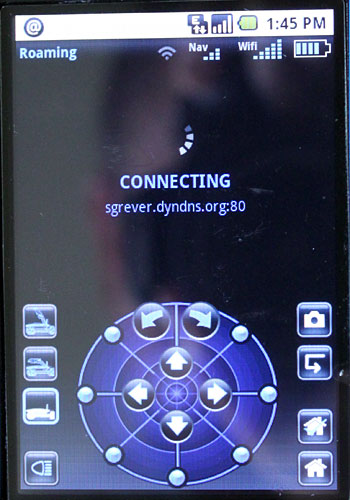 Here’s a screenshot of the AndRovio app trying to connect to my dynamic DNS address. You can also see alot of information about how the user interface was configured as well as the navigation signal quality, wireless signal quality, and batter life of the phone. It looks like a very user friendly interface and includes most of the options we usually get with the normal Rovio navigation interface. 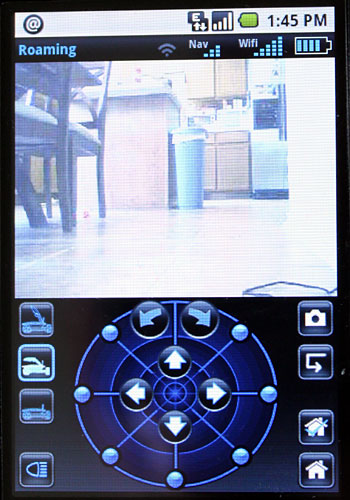 We connected to the Rovio in under 30 seconds over just an Edge connection instead of 3G and here is the first video image we see. Unfortunately, using the Rovio over the internet with only Edge was riddled with long delays during navigation and movement as well as sound delays. The sound and video was delayed and didn’t match up during use. The video quality with natural light was very good, but the delays due to network signal quality was probably causes most of our issues with this app during testing. 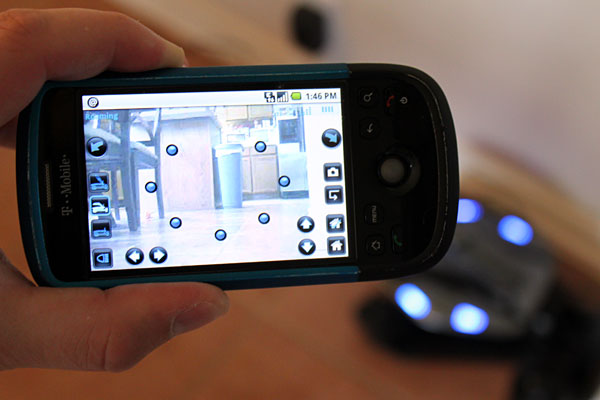 You can also use this app in landscape mode, which made the video larger and overlayed the navigation controls. I actually preferred this viewing style and found it pretty easy to use and operate. I think with a 3G or better connection, users will see better video and audio results and less delays than we noticed during testing. 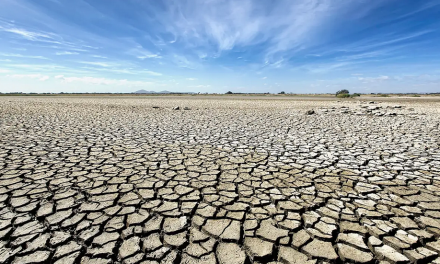