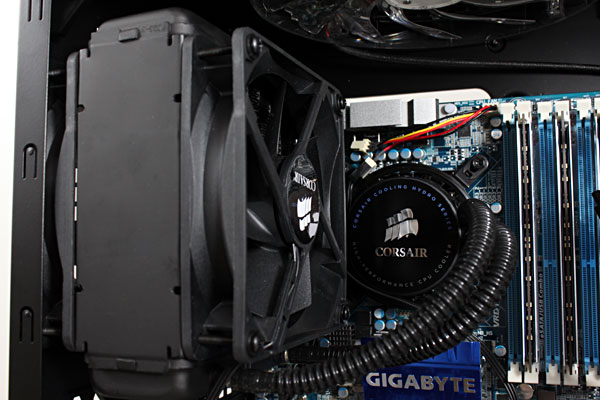 We did things a bit differently with our H70 performance testing than we usually do with other CPU cooling solutions we’ve tested in the past. Traditionally, we’ve used an open-air test bench to evaluate all the hardware that passes by our desks at PC Perspective. For this particular review, we used a common mid-tower PC case to see how our performance results would vary compared to our normal testing perimeters. We also used Cinebench 11.5 for load testing and took our idle testing results after booting into Windows and waiting 30 minutes for each CPU cooler.

To keep things consistent, we re-tested the H50, Coolit ECO and Vantage coolers, and Zalman CNPS10X Flex (with two fans) in our Thermaltake Armor A90 mid-tower case. We felt this was a good mix of the top self-contained watercooling systems (at this price point) as well as how the H70 compares against one of the best air-cooled heatsinks that supports dual 120mm fans in a push-pull configuration.

As a side note, the case we used was a Thermaltake Armor A90, which is a sub $100 case that includes excellent cooling options and is big enough for multiple hard drives, dual video cards, and three optical drives. Check out the entire test bench specifications below to get an idea of the kind of heat that being generated during performance testing. 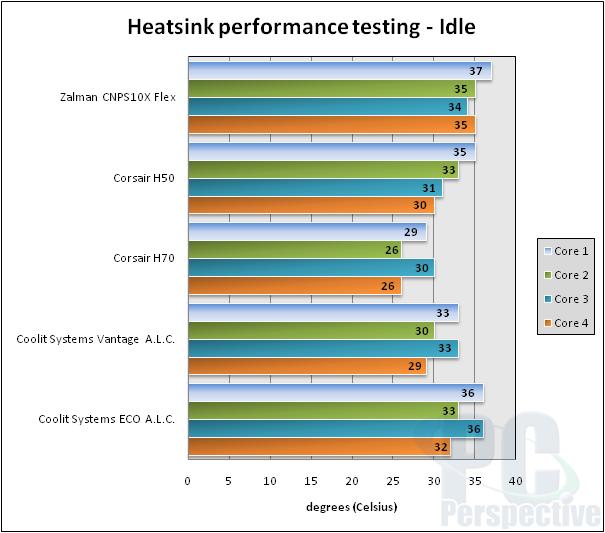 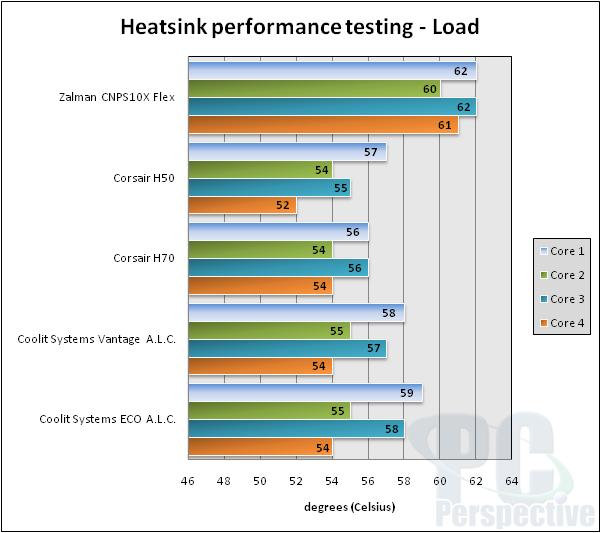 The H70 ripped through the competition during idle testing, but things got a bit more interesting during load testing. The idle results concluded the H70 was about 5 to 6 degrees less than the other CPU coolers we tested. But, during load testing, the H70 was only a few degrees lower than the H50, Vantage A.L.C., and ECO A.L.C. I contribute this to a couple variables that could have impacted our results.

One variable was the type of thermal compound we used. We left the original thermal paste on the H70, but used Arctic Silver 5 for all the other CPU coolers. The other important variable was the extra fans for the H70 and CNPS10X Flex. Both of these heatsinks used push-pull fan configurations during testing as well as different fan speeds that ranged between 1,000, 1,600, and 2,000 RPMs. All of these factors could sway our results a few degrees. Either way, the H70 performed superbly in our real-world testing scenario.

Core Duo or Core 2 Duo, it may be hard to tell 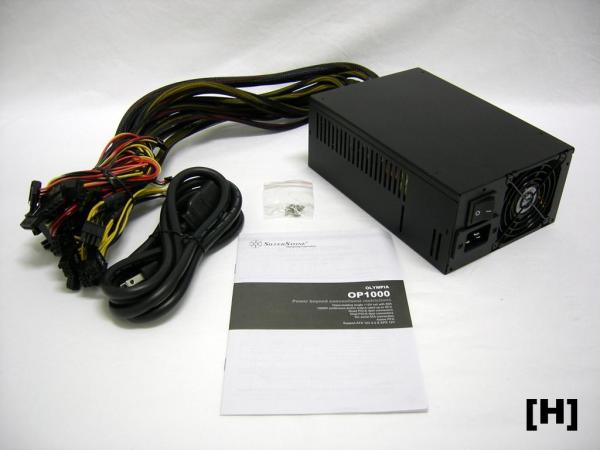