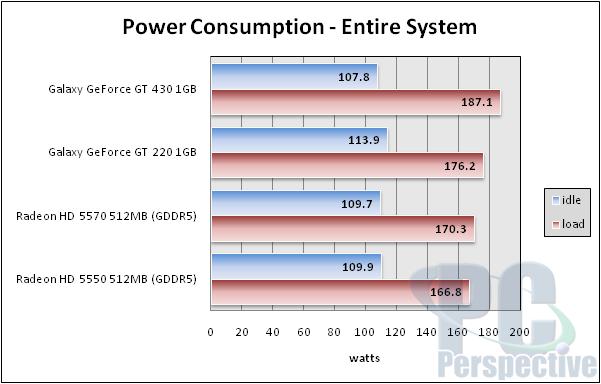 I think we can see why NVIDIA’s GT 430 was not simply clocked higher in order to win out on our benchmarks on the previous two pages: power and heat.  While the Galaxy GT 430 is absolutely not TOO hot, the numbers here continue to show that AMD’s Evergreen architecture is just MORE EFFICIENT when it comes to gaming performance per watt.  With the GT 430 using 17 more watts than the HD 5570 even with GDDR5 memory (and 17 watts is a lot for this market segment) NVIDIA was likely worried of going too much higher and complicating the HTPC story for this card.

If we have to look at gaming performance for a product like this, and we do, then we have to say the GeForce GT 430 is competent though it wasn’t able to beat out the Radeon competition.  Both the HD 5570 and even the HD 5550 were able to closely match or beat out the new Fermi-based GF108 part in our quick and dirty gaming benchmarks.  The truth of the matter is though that both solutions (NVIDIA and AMD) are really going to be just fine for gaming at resolutions like 1680×1050, 720p, etc as long as you are willing to turn down the image quality settings somewhat. 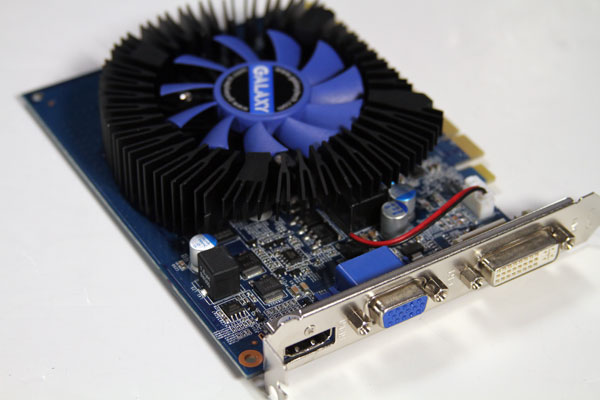 And do me a favor, do NOT believe the hype about DX11 integration on these cards.  It simply doesn’t matter for gaming as any DX11 titles you run on them are going to have the IQ settings down far enough that any and all unique DX11 features are likely going to be disabled anyway.  It is simply a bullet point for both teams for now.

For those of you that want some verification, check out the 3D Blu-ray testing done by our friends at Legit Reviews where CPU activity was only running at about 22% when running 3D content playback even on a modest Athlon II processor.

As of today, there is only a single GeForce GT 430 graphics card at Newegg, selling for $79.  Galaxy told us that is exactly where their version of the GPU will be priced as well.  What does that mean in terms of the overall picture then?
Like I said earlier, this is a very compressed market and I would find it hard to tell you that ANY of these options is going to be bad for you.  AMD still has some feature advantages like the ability to support three displays from a single card, but I doubt many users of $80 cards care much about that.  All are excellent HTPC options and support HD video decoding and bit-streaming audio support as well.

The new Galaxy GeForce GT 430 1GB graphics card brings Fermi and the GF108 GPU to the desktop market after an earlier release in the mobile world.  Easily the smallest GPU built around the same basic design as the GF100 part seen in the GTX 480, the GT 430 is solid gaming graphics card for the $79 market and offers a host of HTPC features including full 3D video support and bit-stream audio.  The AMD Radeon HD 5570/5550 cards still put up quite a fight about 9 months after their release and as such the market is still going to be crowded with no single dominant selection being the obvious choice.

For Galaxy, the new GT 430 gives them a much better option though than the aging GT 220 provided as such if you are looking for a new HTPC option, give this solution a try.