I have yet to be invited to an NDA session about the upcoming AMD HD 6000 series of cards, so I thought I would throw out some last minute thoughts before I get an official lowdown (and have to bite my tongue until they are released).  Both of the images used in this news item appear to have been taken down from their original sites (hence the lack of links), but I was able to scrounge around for copies.  All architectural discussions in this article are based on the numbers in the table listed below.

The past several weeks have seen quite a few leaks about the HD 6870 and HD 6850 cards, and they look to be interesting beasts.  These products are part of the “Northern Islands” family, and the first iteration we will see are the “Barts” brothers.  These will comprise the Barts XT (HD 6870) and the Barts Pro (HD 6850). 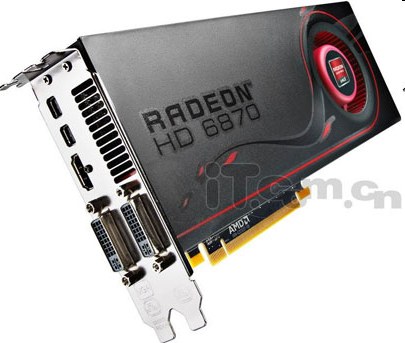 Details on how the outputs work are not yet available, but note the dual mini-displayport connectors.


These cards are based on the same “Barts” chip, but in the case of the HD 6850 some portions are disabled.  The chip itself is an interesting beast, if what we have seen leaked is true.  It features the same number of thread processors as the previous generation of chips which power the HD 5800 series, but with at least two significant differences.  Instead of each thread processor having 4 general stream units and 1 specialized unit, it looks like it has been cut down to 3 general stream units and 1 specialized unit.  The assumption here is that the die size is going to be lower, and that AMD has compensated for the potential performance loss by improving the front end of the processor to more efficiently use the compute performance of these rearranged SIMD units and thread processors.

It also has rearranged how many overall SIMD units there are, as well as texture units.  Instead of the 20 SIMD units, we look to have 16.  Each SIMD is attached to 4 texture units, giving a total of 64 in the Barts XT chip.  The Barts Pro will be comprised of 14 SIMD units.  Obviously AMD has adjusted as well how many thread processors are in each SIMD unit, going from 16 in the HD 5800 series up to 20.  It certainly looks like AMD adjusted these units to more optimize the workflow and workload of these processors, much like NVIDIA did with the GTX 460 as compared to the larger GTX 480.  The ROP counts appear to be unchanged from the two generations of chips, but the overall clockspeed of the HD 6800 series will be higher than the older HD 5800 cards.

AMD appears to have changed around all the “uncore” aspects of the GPU, but have left the overall functionality of the thread processors intact.  There are still 320 of these processors, but once we figure in the 4 stream units vs. the older 5 units, we see that stream count has fallen from 1600 to 1280.  What makes this interesting is that the performance of the HD 6870 is very close to that of the older HD 5870 (though still slightly slower as shown in leaked benchmarks).  According to leaked slides, the Barts XT card will pull 146 watts at load, which is down significantly from the HD 5870 which officially pulls 188 watts.  Theoretically this would allow AMD and its partners to equip the Barts XT with a single 6 pin PCI-E connector, but in reality I am pretty sure we will see most solutions have two of those plugs.  The Barts Pro on the other hand should pull around 114 watts, and it will come on a board design with only one PCI-E power connector. 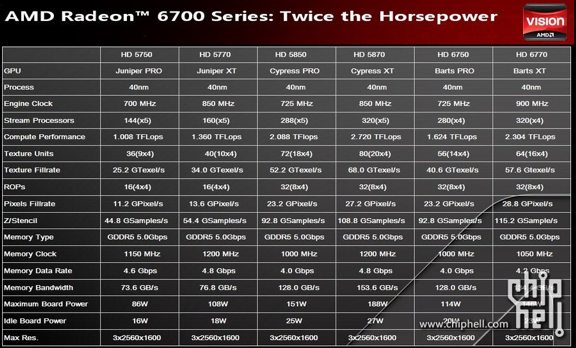 The initial leak which called the Barts chips the HD 6700 series.  It has now been confirmed that Barts will be the HD 6800.  Table courtesy of Chiphell.


It does not look like tessellation performance has been improved on these cards as we had speculated some time ago here at PCPer.com.  NVIDIA will still hold a decisive edge in that area of performance, and this could be significant considering the titles which are coming out soon (such as H.A.W.X. 2), as well as current titles like Metro 2033.  It is rather unfortunate AMD was unable to address this in the Barts products, but that does not preclude it being addressed in the upcoming Cayman series of boards which are rumored to be released some time after the Barts/6800 family.

Overall it appears as though AMD will have a nice refresh this year, as the Barts products will be slightly lower priced than the current 5800 cards.  They will have lower overall performance than their older 5800 brethren, but they should also run cooler, pull less power, and be more or less comparable to the previous generation at a slightly lower price point.  Carrying this line of logic further, we can expect the Cayman series of parts to embrace the changed around features, and produce a higher performance part at the top end.  But the real question here is if the Cayman parts will be a single chip solution, or made up of 2 x Barts GPUs. 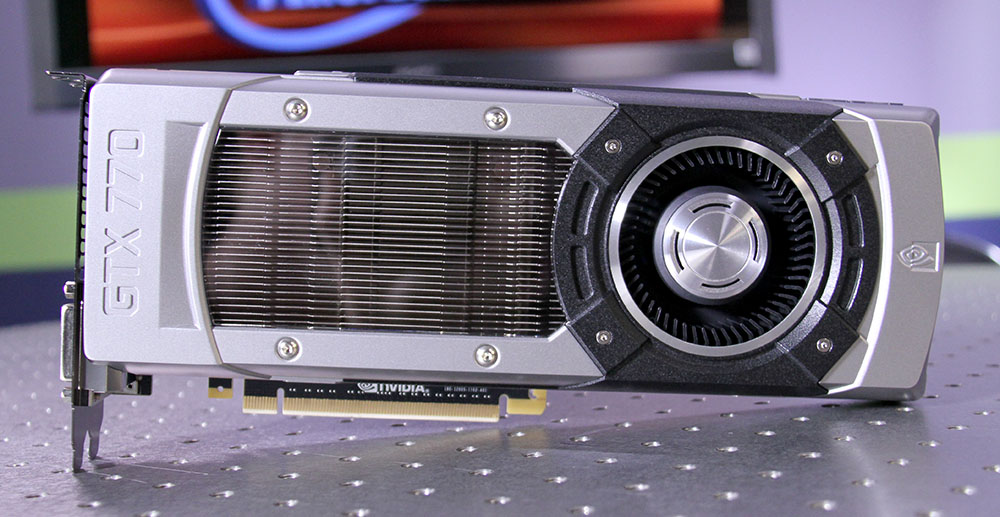