Before I started testing the real-world performance of the Corsair HS1 USB gaming headphones, I wanted to see how comfortable they were to wear. This was the first pair of gaming headphones that actually seemed to fit my 7 5/8″ head correctly after I adjusted the left and right ear cups a bit. I love the padded bridge and oversized ear cups too. They seemed a bit large at first, but after wearing them for a few minutes, I was able to quickly adjust to their overall size and weight. The mic can be moved easily up and down, but it’s a bit oversized and could obstruct your view a little if you position it too high on your face. Overall, these headphones are extremely comfortable and aren’t too heavy for my personal preferences.

Our PC gaming system is based off the Intel LGA 1366 platform using the following hardware components:

Our headphone testing focused on PC gaming using some of our favorite First Person Shooter games, including Call of Duty: Black Ops, Left 4 Dead 2, and Battlefield Bad Company 2. We also tested how well the HS1 performs in high definition movies and music. We manually set our display resolution at 1920×1200 and turned on all the 5.1/7.1 audio enhancements to hear everything we could using the Corsair HS1 headphones. Our objectives during testing were two-fold — to gauge how well these headphones help us locate where specific sounds are coming (directional/positional sound) from and to evaluate the headphones’ overall sound quality during online FPS gaming, movies, and music. 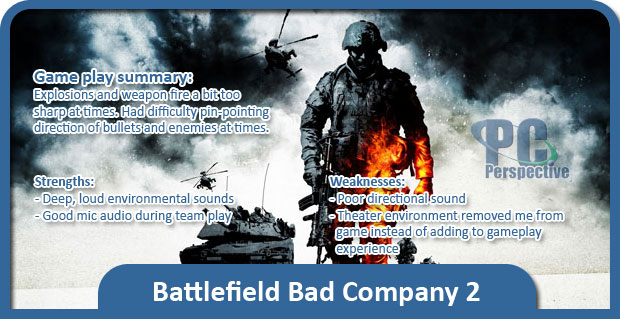 Game summary: Battlefield Bad Company 2 is primarily a squad-based online first person shooter based around modern warfare. Additionally, the game includes a single player campaign whose storyline is a continuation of the original Bad Company. The game’s Destruction 2.0 engine allows for destructible environments,and multiplayer maps contain an array of vehicles, aircraft and turrets and allow for a number of game modes.

One of our favorite, and most anticipated, FPS games to arrive this year was Battlefield Bad Company 2. This is the latest FPS game from the popular Battlefield series that focuses more on team and squad strategy than individual accolades and kills. We played several types of online, multiplayer matches over three weeks of testing to evaluate these headphones.

For our first FPS gaming test, I didn’t have many high expectations for the HS1 headphones. This was due to my previous experiences with other Dolby 7.1-based headphones I’ve tested in the past in Battlefield Bad Company 2. True to form, I noticed questionable directional sound and had difficulties keying in on where explosions and weapon fire was originating from during online team death matches. While the actual environmental sounds were crisp and clear, the directional sound left something to be desired. The theater-style sound we heard from the HS1 headphones didn’t match up well with the urban warfare environment used in Bad Company 2. 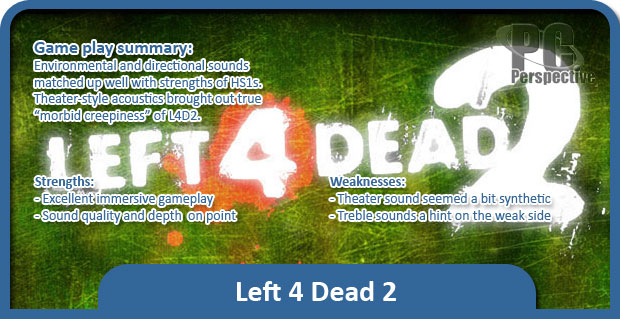 Game summary: Left 4 Dead 2 is set during the aftermath of an apocalyptic pandemic, and focuses on four survivors fighting against hordes of the infected. The survivors must fight their way through levels, interspersed with safe houses that act as checkpoints, with the goal of reaching a rescue vehicle at the campaign’s finale.

The next FPS game we wanted to throw against these headphones was Left 4 Dead 2. I don’t have too much experience playing this particular shooter, but from what I’ve heard it intertwines all of your senses very well into a dark and creepy suburban environment. We have noticed good results with this particular game in previous testing of the Plantronics Gamecom 777 and Psyko 5.1 headphones too. I personally think this is due to the 5.1 sound optimizations available in L4D2, but that’s debatable.

We went through about four hours of co-op gaming and continued to receive consistent 5.1 sound from the Corsair HS1 headphones. In fact, we were highly impressed with how immersed we felt from the oversized ear cups and how comfortable these headphones were during game play. I especially liked the sound from the adjustable mic, but we did have issues optimizing the sound so it didn’t feel like I was listening to zombies trying to suck my blood in an amphitheater. Trying to optimized Dolby-enhanced headphones are very difficult to do because each game title brings with it unique challenges that will need to be addressed in the Corsair HS1 sound control panel. After several minutes of tweaking the treble and bass, we were able to come up with a playable sound experience that gave us excellent sound quality and depth. 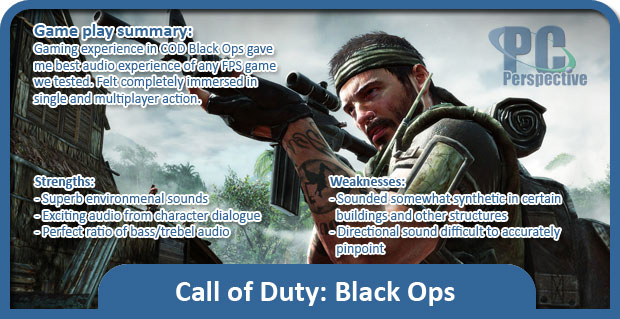 Game summary: Call of Duty: Black Ops takes players around the globe, behind enemy lines, in the deepest and most intense Call of Duty experience ever.  The title raises the bar for online gameplay with an arsenal of features, including unprecedented player customization fueled by an all-new in-game currency system, new Wager Match gameplay modes, Theater video recording capabilities to capture favorite gameplay experiences, Combat Training and more.

The final game I wanted to concentrate my performance testing on was Call of Duty: Black Ops. I’ve played the entire COD series over the years and would say I’m highly proficient in the functionality of the game environment as well as how sound is used in this game to enhance a gamer’s overall experience. After enabling 5.1 sound in the game settings, I was off to try these headphones in single campaign and multiplayer modes.

During my single player campaign testing, I was automatically enamored with how the HS1 handled the initial dialogue from multiple characters in COD Black Ops. Not only was it crisp and sharp, but I could relate the sound to people located at different sections of the screen. When the battles started to heat up, the bullets zooming past my head felt completely realistic and the loud booms from the artillery fire made me jump out of my seat several times. This was probably the first time I’ve actually felt so good about how the sound quality, graphics, and game play were synced perfectly together.

After having a positive experience in single player mode, I moved on to trying my luck in team deathmatches with several local gamers from Texas. After getting owned a bit the first couple of rounds, I started to find my groove thanks to the excellent directional sound provided by the HS1 headphones. Having accurate directional sound during gaming is essential and gave me an edge that I was able to communicate with my teammates so they would also know where enemies were located on the map. The environmental sounds also gave me keen awareness of my surroundings and I was able to sneak up on several opponents with a quick melee knife kill that is quite satisfying. However, I still had some minor issues with some of the sounds feeling a bit synthetic when I was enclosed structures. Directional sound was a bit challenging in these structures too. 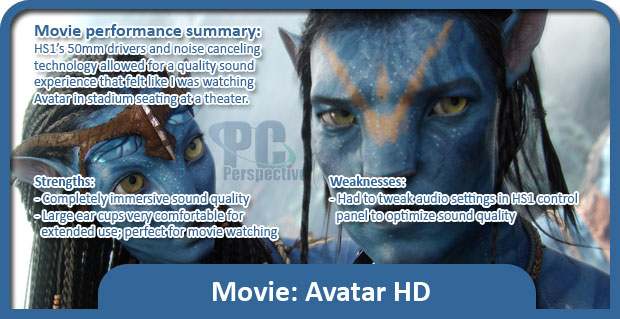 To add an extra dimension to my headphone performance benchmark suite, I chose to watch an entire Blu-ray movie on my computer to see how well the HS1 headphones would respond. This is completely subjective, but I think most consumers want to purchase headphones that can be used for a variety of tasks, including listening to music and watching high-definition movies. I chose the movie Avatar because it has an eclectic amount of environments that should provide for a good sound experience.

After watching the movie for more than 160 minutes, I took notes about my personal feelings about the sound experience provided by the HS1s. While the sound quality was spot on during most of the movie, I initially had to make some manually adjustments to the Corsair HS1 control panel to optimize the sound from gaming to movies. This might not be necessary for every movie you watch on your PC, but the theater-like sound actually worked better in this movie than during our gaming benchmarks. In fact, I turned out the lights in my office and was able to feel perfectly in tune with the entire movie because of the HS1’s ear cup design and overall comfort. 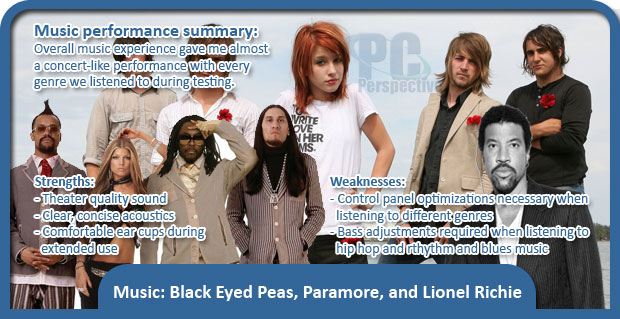 The final portion of our performance testing involved listening to some of my favorite artists in iTunes like the Black Eyed Peas, Paramore, and legend Lionel Richie. This isn’t the most versatile list of songs to test headphones with, but I just wanted to provide a subjective comparison of different styles and genres that would appeal to our readers.

The first songs I listed to were from the Black Eyed Peas called “Boom Boom Pow” and “Imma Be”. Both of these sounds are high-energy tracks that pushed the boundaries of the HS1 headphones. However, the HS1 pushed back and was able to deliver deep bass tones combined with good reproduction of the synthetic sounds the Black Eyed Peas are known for.

Next, we listed to two songs from Paramore called “Misery Business” and “Crushcrushcrush”. Both of these songs are a mix of alternative, punk, and pop. Right away, the high-pitched sounds were a bit overwhelming until I adjusted them in the sound control panel. This helped sync up the vocals with the low tones from the drums and bass.

Lastly, I listed to a couple classics from Lionel Richie called “Hello” and “All Night Long”. Both of these songs are very soulful and really gave me a good impression of how the HS1 headphones could handle classic rhythm and blues titles. After listening to Paramore, I noticed a lot less bass and more treble, which confused the HS1s a bit until I adjusted a couple sound settings. This helped bring out Lionel Richie’s vocals and made for a crisp and nostalgic experience that I enjoyed tremendously. 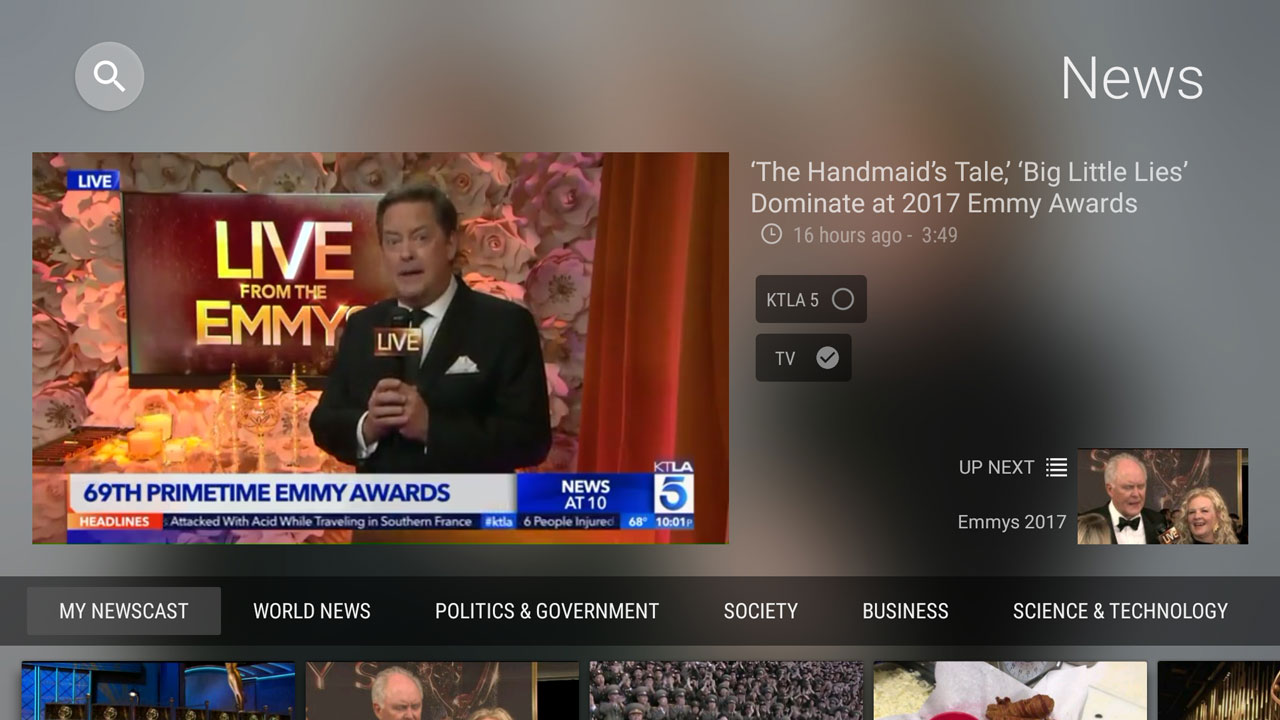 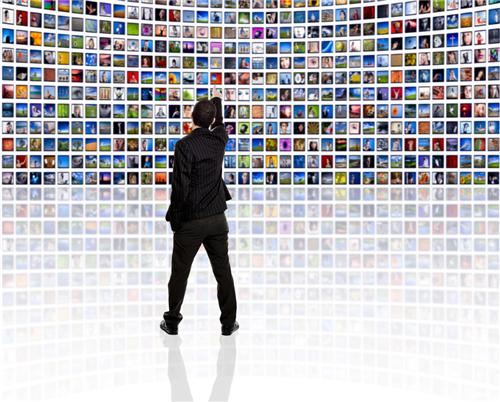