The Typing Feel and Performance, Conclusions

Both the Steelseries 7G and the Das Keyboard Model S use Cherry key switches, but they do not use the same type. The 7G uses Cherry MX black switches, while the Model S uses the Cherry MX Brown.

The result of these different key switches is a substantial difference in typing feel. The 7G has a very subtle feel, and key activation seems to occur well before the key is completely depressed. The keys also do not provide firm feedback once they are fully depressed by instead continue to feel squishy. The result is a soft feel that is not as satisfying as that of the typical mechanical keyboard.

The Das Keyboard Model S is, by comparison, as crisp as a winter morning. Key activation takes places just slightly before the key is completely depressed, but keys have a far more distinct feel when they bottom out. The keys also seem to rebound with a quicker, more distinct movement. There is absolutely no vagueness in the action of the key switches. The spacebar is particularly firm and distinct. 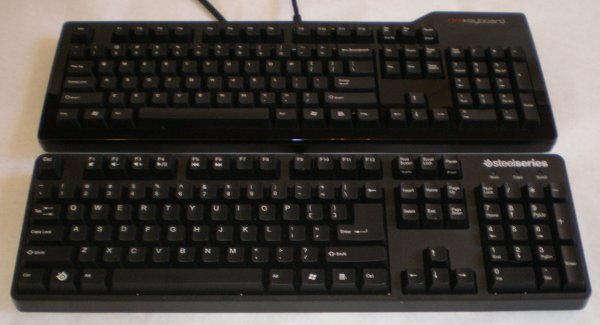 In a battle of pure typing pleasure the Model S wins. However, the 7G does have an arguable benefit when it comes to gaming. The softer key presses are a bit more manageable when you have to keep a key pressed for a very long period of time – say, in a first person shooter. I noticed less fatigue after playing Borderlands for a few hours. The difference is slight, but if you really are a pro gamer who spends 8 hours a day playing PC games you may well find the 7G is to be superior.

To see if there was a difference in latency between the keyboards I used PassMark KeyBoard Test and began pounding away to find the lowest possible lag time between key presses. Both keyboards were able to achieve lag time scores as low as 2ms. I also tested to see how many keys could be registered at once. As would be expected, both were able to register only 6 keys at once when connected via USB. However, the 7G is actually a PS/2 keyboard that ships with a USB adapter. When connected via PS/2 the 7G was able to register any apparently limitless number of keys simultaneously. The Model S can also be connected via PS/2 and, when connected in this fashion, also appears to have a limitless in ability to register simultaneous key presses.

Although the Model S feels better to use, the 7G’s less responsive key switches seem to result in an advantage when it comes to noise. Both of these keyboards are supposed to be quieter than the average mechanical keyboard – indeed, that is why we’re comparing them – and here the 7G scores a victory. Still, the Model S does seem quieter than a standard mechanical keyboard, and it remains quiet enough that you probably won’t wake your entire house simply by typing an email, although it is still loud enough that you may annoy a co-worker who shares an office of cubical with you.

To help you determine if you can live with the noise of these keyboards we’ve included the following videos. The first features the Steelseries 7G and the second is the Das Keyboard Model S. The third video is of a rubber-dome keyboard (a Creative Media Keyboard from a few years back).

Picking a clear winner in this comparison is not easy because both products have definite pros and cons. I do have to pick a winner, however – it wouldn’t be much of a comparison if I didn’t – and so I give a slight edge to the Das Keyboard Model S.

The Model S is a simply superb piece of machinery to type on. It is clear and crisp, as if you’re using a 21st century type-writer. The Model S also has a usable USB hub that clearly outpaces the anemic hub found on the Steelseries 7G. Finally, the Das Keyboard has a superior layout.

The 7G has its merits, however. The build quality is nothing short of astounding. The flimsy wrist-pad is surprisingly comfortable, providing full support to your lower hand and your entire wrist simultaneously. The 7G also makes less noise.

While I’ve harped on the typing feel of the 7G a bit in this review, it is important to note that it only feels lackluster when compared directly to the Das Keyboard. Both of these keyboards are far better than your normal rubber dome model. Yes, you’ll pay three or four times more for this than you would for a competent media keyboard from Logitech. But these keyboards are at least three or four times better.

That use for tha radio be a good one