Since the original VIA Nano was released, we have been expecting the dual core version to eventually hit the scene. Now after several years, we have our hands on the first samples of this new product. We also were able to see what the VIA VN1000 integrated graphics chipset can do in the face of the latest competition from AMD.

VIA used to be the bomb.  Ok, maybe they had their issues as well.  But they were still ahead of the curve when it came to chipsets in the late 90’s and early 00’s.  Yes, nicknames like “Darth VIA” were bandied about by users that had negative experience with VIA’s chipset products, but overall they were a successful company when it came to core logic chipsets and pushing advanced features as well as having competitive performance. 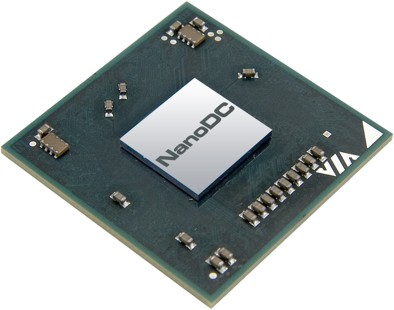 This should be the approximate size of the 40 nm VIA Nano DC.


Arguably VIA’s biggest success was the Apollo Pro+ chipset.  This was a product well ahead of its time in terms of features and performance.  During this period Intel was trying to push their 800 series chipsets with RAMBUS support, but that particular combination was unpopular due to the extreme price differences between SDRAM and RDRAM.  Intel tried to rectify this situation with a Memory Controller Hub which supported PC100 SDRAM.  Unfortunately, that hub had some real issues, one of which was corrupted data.

VIA came to the rescue with a true PC133 SDRAM based solution, which also supported (unofficially) the 133 MHz FSB that was used by the Pentium !!! processor.  It also was paired to a southbridge which featured ATA-100 support, as well as plenty of USB 1.1 connections.  VIA also had quite a bit of success in the AMD market as well with their KT series of chips for both the classic Athlon architecture, and the first examples of the Athlon 64.  A combination of increased competition in the AMD market by NVIDIA and ATI, as well as constant legal battles with Intel over the use of their particular front side bus licenses, caused VIA to have a drastic shrink in their chipset business.

Sensing that all good things will likely come to an end, VIA did what it could to survive.  VIA diversified its chip offerings, and they currently provide some very popular and cost effective 1394a based controllers, audio codecs, and a handful of network controllers and PHYs.  The biggest change though was the buying of Cyrix from National Semiconductor.  This was not exactly a match made in heaven, as a goodly portion of the Cyrix staff was laid off.  VIA then acquired Centaur.  Apparently the teams were somewhat merged, but all new development of CPUs would be at the Centaur design center.

VIA focused on the low power market with the majority of their products, and they successfully combined these new CPUs with their current and upcoming motherboard chipsets.  VIA eventually abandoned chipsets altogether for the AMD and Intel markets, and only a few examples of those products can be seen today.  The VIA K8T900 was the final high end chipset for the Athlon 64 market, while the PT890 was a fairly basic chipset supporting the Pentium 4 and the Core 2 series of products. 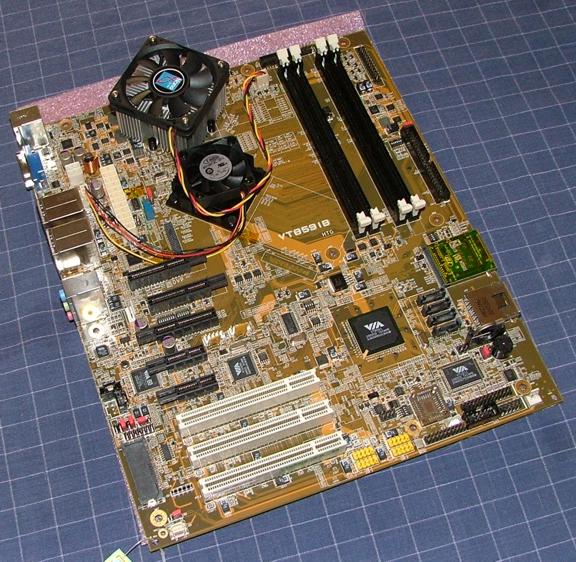 The engineering board/sample that VIA hand delivered to us.  Note the lack of a PCI-E 16X slot.


Since that time VIA has been designing their chipset products around the needs of the low power crowd and the latest VIA processors.  VIA also acquired S3 graphics around the same time as the Cyrix and Centaur acquisitions.  VIA integrated S3 graphics based designs into their chipsets, which helped to flesh out their 3D and video playback support.  S3 is another interesting story, and one that is rather infamous due to their seeming market dominance, and subsequent fall in the face of strong 3D graphics competitors.  Under VIA, S3 has had a small resurgence in the market.  While their standalone graphics cards have not sold entirely well, they have added cutting edge features to each new generation which would inevitably sway some consumers their way.  Their latest generation of Chrome 500 series cards support DX 10.1, OpenCL 1.0, and a host of video playback technologies which includes hardware Blu-ray/HD Codec decode support.

The past decade has seen quite a few processors come from VIA, but none of those were all that terribly satisfying to a large audience of consumers.  It was not until the VIA Nano came into being that people began to take notice of VIA again.  The VIA Nano was a next generation design that simply blew the doors off of the competition in terms of performance and power consumption.  It was able to outperform the single core Atom models from Intel, yet still sit in the same general power envelope and clockspeeds of those products.  When looking at high level abstractions of the product, it was very similar to the Core 2 architecture from Intel.  Obviously it was not an exact copy by any stretch, but some of the larger architectural details were remarkably similar (like the four decoder setup at the front end).  Unlike the Core 2 architecture, it was not a native dual core design.  While the folks at Centaur designed it to eventually be used in a dual core situation, it did not share major features like the common L2 cache between cores.

It took a while to get these Nano parts to market, and when they finally did they were often overshadowed by the dual core Atoms and other competing, low power designs.  It still is an impressive chip in many ways though, and VIA has kept selling them.

Intel’s new king of the hill