The VN1000 Chipset and Test Setup

The second part of this release is the VN1000 integrated chipset.  This features the Chrome 500 based graphics part, which is a DX 10.1 compliant part.  This part was announced late last year, but has not seen a significant penetration into the market until fairly recently.

The VN1000 utilizes the Fastpath 64 dual channel memory controller, which allows speeds up to DDR-2 800 and DDR-3 1033.  It is combined with the VT8261 southbridge, which features four SATA-II ports, 10 USB 2.0 ports, and a collection of legacy ports. 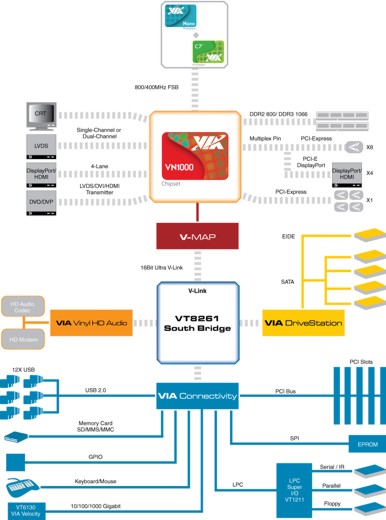 This high level abstraction shows the features and connectivity of the VN1000 chipset.


The graphics portion of the VN1000 utilizes 32 stream processors, 4 sample units (assuming ROPS here), and the Chromotion 2.0 video acceleration unit.  It is a full DX 10.1 compliant chip, and matches up very well against the AMD 880G integrated chipset.  The core is clocked at 500 MHz, and it appears as though the chip is produced on a 65 nm process.

VIA is quite excited about the integrated performance of this chip.  When I first received it I was skeptical as to how well it would compare against the current class leading AMD 890GX.  But considering how well the previous Chrome 540 GTX fared against other chips in its price class, perhaps this integrated unit offered some surprises.  And it did.  The drivers I received are very recent, and in the handful of games I threw at the machine, I did not see any issues.  Apparently there is a driver bug with DiRT 2, but in the applications I used I did not have a negative experience.

The only real issue with these two products is the overall TDP of the combination.  25 watts for the high end Nano DC, and another 10 to 15 watts for the VN1000, and suddenly we are looking at Intel mobile i5 520M type TDPs (which include their own graphics portion and has an official TDP of 35 watts).  Even worse for VIA are the AMD Ontario and Zacate APUs, which have 9 watts and 19 watts TDP respectively.

I was also able to watch a handful of Blu-ray titles, as well as some heavily compressed H.264 and VC-1 files, and rarely did I see overall CPU usage go above 25%.  I watched these films while using Media Player Classic in the K-Lite Mega Codec Pack 6.5.0.

I did not have any Atom or CULV products on hand for testing, so I improvised.  I used a stock clocked Athlon II X2 255 (3.1 GHz) with the 890GX.  I then downclocked that processor to 1.8 GHz and lowered the 890GX to 500 MHz, so it matches the speed of the 880G chipset.  This way we get to see how a mainstream dual core processor does against the low power Nano DC, as well as how the larger desktop chip fares against the Nano DC when the clock speeds are equal.  The Athlon II X2 260u is the Energy Efficient version of the Regor core, which does in fact run at 1.8 GHz.  So the power results of this downclocked processor at load should be very similar to the real deal. 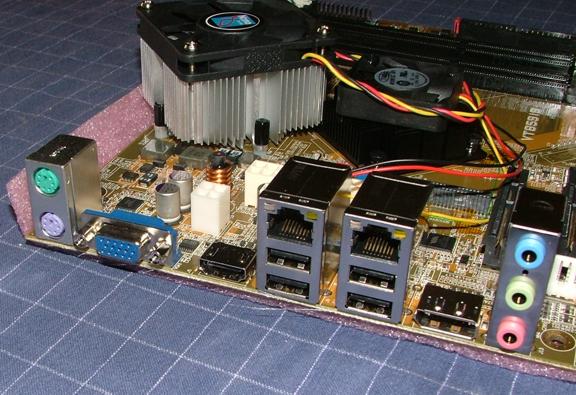 Note the VGA, HDMI, and DisplayPort connections natively supported by the VN1000.


The Nano DC is actually quite robust, so I ran it on Windows 7 Ultimate 64 bit edition.  In desktop applications the setup did not cause me any problems, and it ran just as I would expect any lower end dual core product would.  2D performance while browsing, desktop applications, and video playback is responsive and seamless.