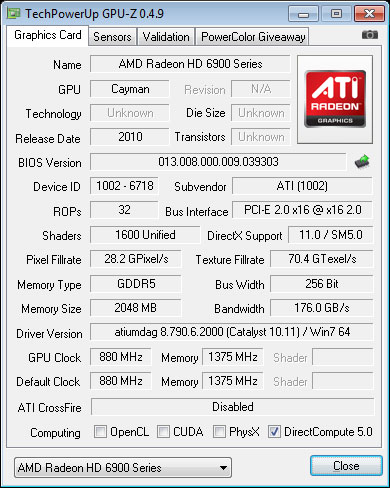 Incorrect specs on the HD 6970 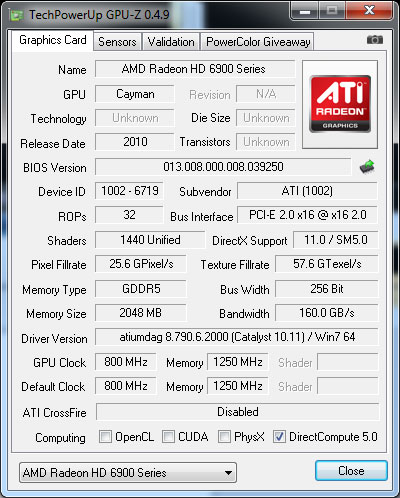 Incorrect specs on the HD 6950

Obviously our copy of GPU-Z was having some issues with some of the basic specs on the HD 6900 series of cards but some of the details are correct: clock speeds, memory size, etc.   By the time you are reading this an updated version is likely already available.

For today’s review we are going to be comparing the new HD 6900-series of graphics cards against the best both sides have to offer.  The retail price on the Radeon HD 6970 will be $369 so one grouping is as follows:
While I realize that the GTX 580 is out of the price range of the new HD 6970 I wanted to show how the top single GPU technologies from both companies compared.  For the Radeon HD 6950 we have the following:
The Radeon HD 6950 is all alone at that $300 price point but it is surrounded by two worth NVIDIA options at $50 lower, and $50 higher price tags.  It will be interesting to see how they stack up.

I am also including another set of graphs that will look at CrossFireX scaling for both the HD 6970 and HD 6950 cards as well as how the HD 6900 and HD 6800 series of GPUs scaling in price and performance.

You will likely also notice a completely new benchmark suite on PC Perspective – we have needed a refresh for quite some time and we finally got it.  Unfortunately for us that mean 40+ hours of benchmarking; for you that means much more current and relevant results!