The Crosshair IV Extreme Board

This is not a small board.  It is not exactly E-ATX sized, but it is getting close.  It is a bit larger than a standard ATX board, but unless a case is really tight, it should fit in the majority of products out there.  I used the Silverstone Raven 02 for mounting the board, and it features plenty of space to still plug in the SATA plugs, which are parallel to the motherboard.  Some cases may be too tight, but this again is not all that much larger than a standard ATX motherboard. 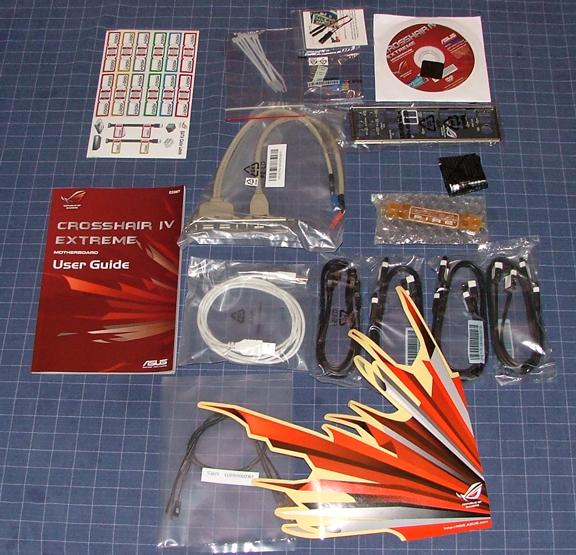 And what a bundle it is!  Asus spared no expense on it, and passed those savings onto the consumer!


The board features a fairly typical 8+2 power phase array.  It utilizes solid capacitors in the design, but shuns other technology such as DrMOS chips or High-C capacitors.  There does look to be a “super capacitor” type chip in there, but it is hard to identify.  The design is slightly different from the Formula board, as it has less real estate to work with.  Needless to say, during testing it worked exactly as it should.

Instead of the four buttons on the Formula, the Extreme takes those buttons from the bottom of the board and puts them to the top corner.  It also removes the auto-OC button, but retains the Core Unlocker, Reset, and Power buttons.  The Go Button acts as a “memory safe mode” enhancement, which will set very relaxed timings for the memory installed on the machine, in case there is an issue of locking upon startup.  Right next to the buttons are a row of dip switches which control the power to the individual PCI-E slots that populate the board.  There are a total of five PCI-E 16X slots on the board, and for potential troubleshooting reasons, a user can turn off power to those slots via the dip switches.  Right below those switches are the Probe It voltage points, which allow external monitor of the voltages to the major components around the board.  This is obviously an overkill feature that will not be used by the vast majority of users out there, but certainly can come in handy for those into extreme overclocking with water cooling and LN2. 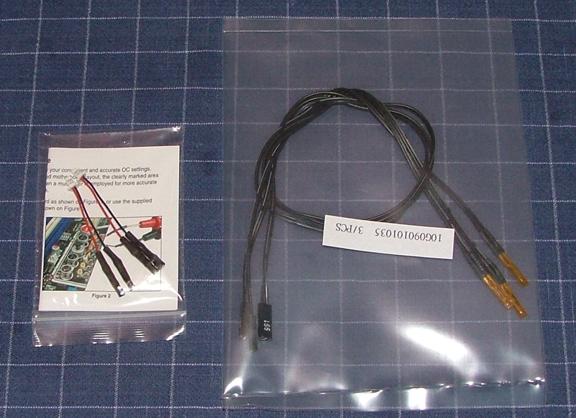 Two of the more interesting pieces.  On the left are the voltage probes that can plug into the motherboard and on the right are extra thermal probes.


SATA duties are performed by the native SB850 southbridge, giving 6 channels of SATA-6G capabilities.  Two more onboard SATA ports are controlled by a JMicron SATA-2 controller, with another identical controller powering the two e-sata ports on the back of the board.  The SB850 has turned out to be a gem of a controller, which is quite an accomplishment considering the issues AMD had with its previous controller iterations in terms of overall performance and IOPS scaling.  Poor SATA performance should not be a concern to users anymore, at least with this latest generation of chipsets from AMD.  USB 3.0 support is provided by the NEC controller found on countless other boards.  It will be sometime in 2011 that we will see the first native implementations of USB 3.0, and apparently AMD will be licensing the same technology from NEC that we see here.

The big jump away from previous iterations is that of the use of an Intel Gig-E controller.  The Intel 82583V is a step up from most of the Realtek and Marvell based units typically found integrated on motherboards.  Apparently a slightly older driver revision caused crashes when it encountered heavy traffic, but this has been fixed with the latest update on Asus’ site.  The addition of the Intel controller is not necessarily a deal maker or deal breaker, but it is an interesting change that sets it apart from most other enthusiast boards in the AMD space.  Firewire 1394a is also supported on the board.  Sound comes from the Realtek ALC 889 chip, which supports 8 channels of HD audio.  Asus does not include its SupremeFX software functionality with this board, which provides up to EAX 4.0 support.  This is not necessarily a bad thing, as Realtek has become a very solid chipmaker with exceptionally mature drivers. 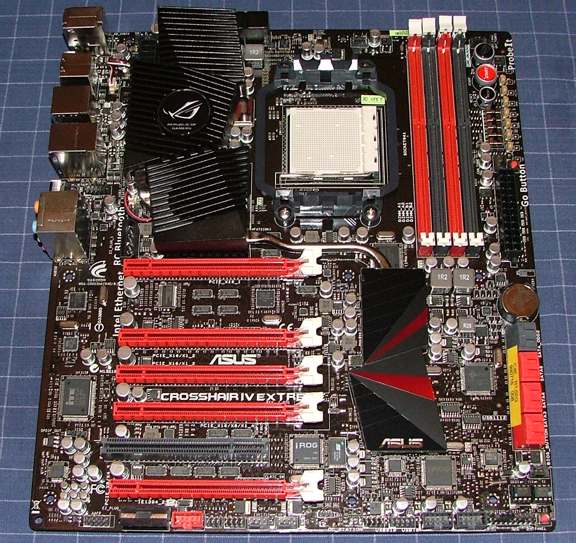 Our first look at the full board.  Note the lack of any PCI-E slots less than 16x in width.  One PCI slot is included for those older/favored soundcards.

The most striking feature of this board is the five PCI-E 16x slots available for use.  Two are controlled by the 890FX chip, while the other three are handled by the Hydra controller.  Four video cards maximum can be installed at once, though spacing concerns might in fact limit that to a total of three cards at any one time.  Native Crossfire will use slots 1 + 3, while 2 card Hydra will use slots 1 + 4.  Three way native Crossfire is not possible, but three way Hydra is (slots 1, 4, and 5).

The cooling on the board is pretty impressive, or at the very least somewhat interesting.  There are several distinct coolers connected via a large heatpipe.  The lower cools the SB850 and Hydra chips, while the upper series cool the 890FX northbridge and all the power chips.  Something that is easy to overlook is the small fan embedded in the north cooler.  This is a small fan, and it can become a little whiney when things heat up.  In a closed case this really is not an issue, but if a user runs the case open then it can become noticeable.  Also on the north cooler there is an illuminated ROG badge attached.  It looks sharp, but is only useful for those with case windows.