The kitchen sink is no longer safe with Asus on the prowl for things to give their motherboards an edge at the high end.  Lucid Hydra, Intel Gig-E controller, Firewire, HD sound, USB 3.0, overcloking settings galore, e-SATA and SATA 6G.  All there and accounted for.

A direct comparison of size and layout against the MSI 890FXA-GD70.  Surprisingly similar.

The design could not all be fit in a standard size ATX board, so they expanded it a little.  It is not quite E-ATX size though, so it should still fit in a large majority of standard ATX cases.  The color scheme is the same red and black motif that has populated ROG boards for some time now.  The build quality is excellent.  Stability has not been a problem in all of my testing.

Overclocking was again excellent, and it matched the slightly more simple Formula edition of the board.  This is fairly impressive considering the design rework that had to be done to get Hydra onboard and working (not to mention stable as well at those speeds).  Expansion capabilities are also very impressive with the 5 full PCI-E slots (with at least one of them being used for a PCI-E RAID card).  A single PCI slot remains to house components like sound cards that have not migrated to PCI-E yet. 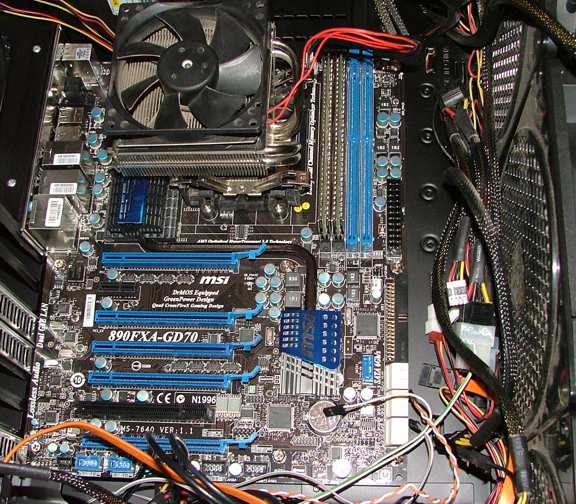 Here is the MSI board all snug in a case.  Note the amount of space between the right edge of the board and the case fans.


I honestly have no complaints about this board, except for the slightly noisy northbridge fan.  Again, it is barely noticeable when the case is closed up, but in a watercooling situation it might actually make itself known.  It is slightly larger than a standard ATX board, but I tried fitting it into a couple of cases and I found no spacing issues on even the older ones. 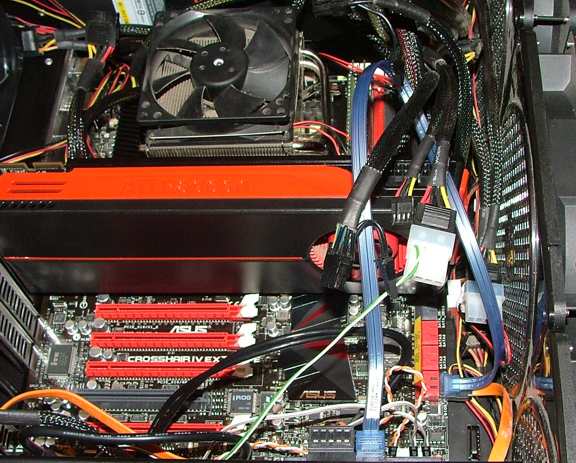 Now a shot of the CHIV Extreme in the same case.  It is tighter up against hte fans, but still plenty of space for swapping out cables.


Asus makes a pretty mean board, and by using the Hydra controller it is allowing multi-GPU with NVIDIA cards on the AMD platform to continue.  Eventually the older NVIDIA 980 and 750 SLI chipsets will go away, and when that happens then it is unlikely that NVIDIA will grant AMD a SLI license for their chipsets.  Asus and MSI are both investing a lot into Hydra, and with an entity the size of Asus on board, we can expect to see much better driver support and improved performance over the next several months.  We have already seen Lucid increase its driver release rate in the past six months with all of the support (and pushing) they are likely getting from these large manufacturers.  While it is certainly not a perfect technology, we have seen enough cases where it makes a positive impact to be well worth a second look when buying motherboards.

A high end board which delivers on features and performance, though the price will sway some users to look at other options.