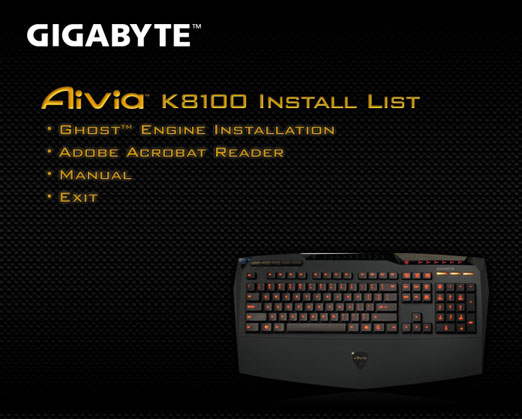 Installing the Ghost Engine software is pretty straightforward as the installer walks you through the entire process to get it up and running. This is the first screen users will see when they use the included software installation disc that comes with the Aivia. 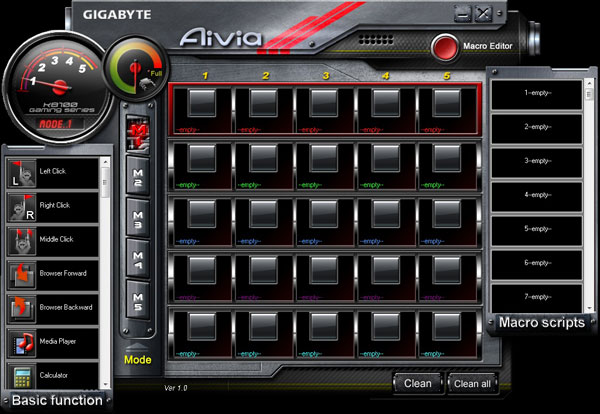 After successfully installing the software, users will be welcomed with this interface where they can set up five profiles with five different macro configurations. The list on the left side of the UI includes all the basic functions a user will want to have access to during gaming or other basic PC operations. The UI is pretty clean and organized. It uses a drag and drop feature to move basic functions on the left into empty macro spaces. There is also another window on the right to create custom macro scripts. The software allows users to store up to 100 macro sets on the Aivia as well. 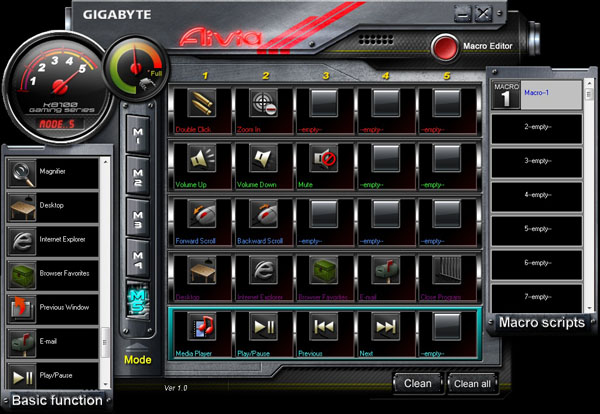 I dragged over several common PC tasks and groups them under different profiles. For example, M5, or the 5th profile, includes macros for listening to music using the Aivia. I set up the first profile with double-clicking and zooming in when I’m sniping during FPS gaming. Creating these macro sets were extremely simply because of the drop-and-drop functionality of the program. You can also see a small tachometer at the top of the page that measures how much memory has been used for creating macros. 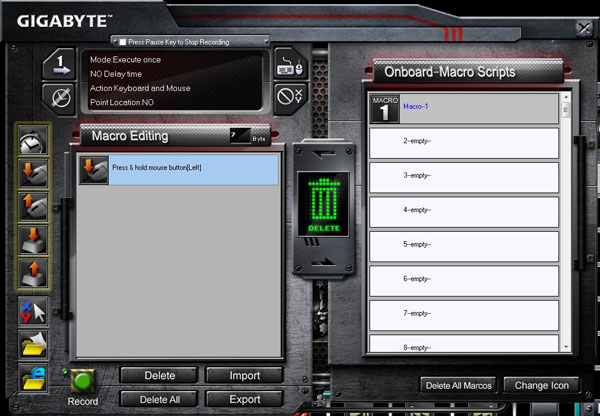 The macro editor is available for advanced users who need to perform a set of PC operations in a specific sequence. You can even import other macros you’ve created in the past as well as export new ones you want to pass on to friends who purchased an Aivia keyboard. Each macro script can be assigned to different profiles on the main software screen. Overall, the Ghost software’s UI is a little too heavy with graphics and they probably should have went for simplicity instead of style. Having said that, creating new macro sets for different profiles was a breeze and the macro editor gives highly-skilled gamers a huge advantage in creating their own custom scripts they can use during any type of PC gaming. 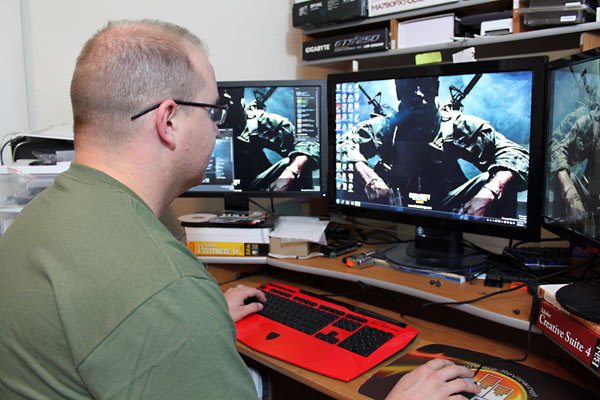 We were able to spend about three weeks using the Aivia keyboard in a variety of scenarios ranging from PC gaming, photo editing, web development, word processing, and internet browsing. The Aivia definitely stood out the most during FPS gaming in Battlefield Bad Company 2 and Call of Duty: Black Ops.

The keys were highly sensitive to my every touch, and during “twitch” games like Black Ops, you definitely need your keyboard to be in sync with your every move and command. I was also able to use the macro keys to quickly switch between weapons as well as melee enemies with unmatched speed. I definitely felt very comfortable using the Aivia and the added wrist rest was definitely a plus after extended periods of gaming. The only down side during FPS gaming was that the position of the macro keys is a bit awkward at the top of the keyboard. I would have preferred to have them on the left side of the board instead of having to move my hands away from the main W, A, S, and D keys every time I wanted to execute a macro.

The low point I noticed during testing was when I was performing basic word processing functions. I wrote this review with the Aivia and felt that the keys weren’t consistent enough for my typing needs and preferences. I had some difficulties adjusting to different key pressures and the soft rubber keys themselves because I typically use mechanical keyboards with my office PCs. While this keyboard is geared toward PC gamers, most of us still need a keyboard that is flexible enough to handle general PC tasks as well.

Overall, the Aivia was very strong during FPS gaming and the macro keys were highly useful once I tweaked them to my unique preferences. However, I was a bit underwhelmed using this keyboard during basic word processing. I just felt the keys were a bit too soft for my taste and lacked a consistent feel and pressure that I’ve become accustomed to from other basic keyboards from other vendors.

How about a nice game of CounterSue