Keyboard quality has long been a trademark of the ThinkPad series, and the Lenovo T410 manages to live up to the brand’s reputation – for the most part. Striking a key results in a quick, mechanical feel that not only bests most laptop keyboards, but also puts most desktop keyboards to shame. The beveled keys are large enough to accommodate the most ham-fisted typists but also provide adequate differentiation, which makes touch-typing a pleasure. Keyboard feel is subjective, of course, but my fingertips tell me that the Lenovo ThinkPad keyboards are still the industry standard even when compared to other well executed laptop keyboards I’ve used recently, such as that of the ASUS U33JC and the Toshiba T235D.

The layout of ThinkPad keyboards have always been a bit fussier than the key feel, however, because of Lenovo’s insistence on placing the function key to the left of the Ctrl key. This will often result in your pinky finger hitting the function key unintentionally. This strange placement remains on the T410s, but is off-set by a number of excellent design decisions. The Enter, Tab, Backspace and Shift keys are exceptionally large on both sides of the keyboard. At the top of the keyboard you’ll find an array of function keys that are approximately half the size of the standard alphanumeric keys. The Esc and Delete keys are oversized for easier use, and dedicated audio buttons, including mute buttons for the speakers and the microphone, are laid out to the left of the power button. 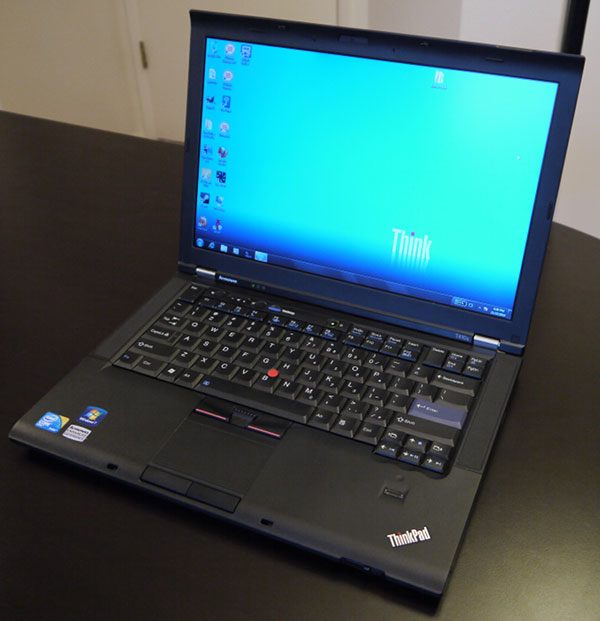 In the middle of the ThinkPad T410s keyboard you’ll find a red trackpointer. This feature won’t appeal to everyone, but it’s a great option to have. The more traditional trackpad can be found in the usual spot. The surface of the trackpad is well textured and touch gestures functioned smoothly. Because of the inclusion of the trackpointer, the T410s actually has two sets of mouse buttons – one above the trackpad and one below. The buttons below the trackpad are primarily intended for use with the trackpad, and they’re not as nice as you might expect. While they offer decent travel, they wobble a bit and are surrounded by large gaps that let you peer into the laptop’s chassis. The buttons above the trackpad, which are meant for use with the trackpointer, are larger and molded to cradle your thumb as it slides down from the spacebar. 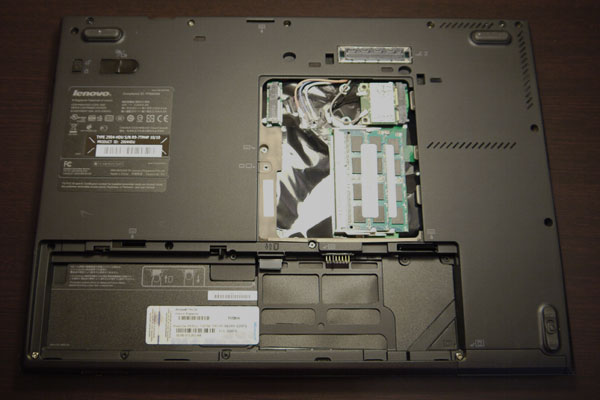 Flipping the T410s over reveals the battery, which is located at the front of the laptop instead of the rear, and a removable panel that is secured by one screw. Removing the panel provides access to the system RAM. There does not appear to be a panel that provides access to the hard drive. There is, however, an extra latch located underneath the optical drive. This is used to unlock and quickly slide out the optical drive so that it can be replaced with an optional extended battery.