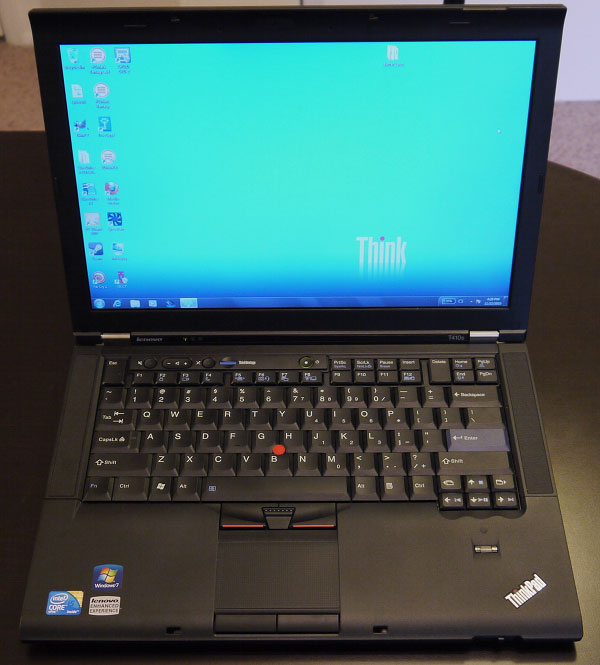 The ThinkPad T410s is only available with a matte display. While some enthusiasts swear by such displays, the matte coating has its advantages and disadvantages. The advantage is practicality. The matte coating is only slightly reflective, so it is possible to use the display in lighting scenarios that would render a glossy display useless. For example, I’m currently writing this review on the T410s in a coffee shop lit by daylight. I have the display set at 25% brightness, but I am still able to see what I’m typing without strain. Even a sunny day cannot overcome the power of this laptop’s backlight combined with the matte display surface.

These advantages come with some significant trade-offs, however. The matte coating has a negative effect on photos, movies and games, all of which appear somewhat washed out. Using the Lagom LCD test images to help judge quality, I found that the biggest problem with the display is black level and white saturation performance. I also noticed this while watching Batman: The Dark Knight on the laptop. Black level performance was so poor that it was sometimes hard to tell what was happening in dimly lit scenes. Shadowy figures simply blended into their surroundings.

When left at idle the Lenovo ThinkPad T410s is a cool customer. Temperature readings were below 40 degrees Celsius, which is great for a thin laptop with a powerful processor. The cool internals also translated into cool external surfaces. The palmrest was room temperature and most of the laptop’s bottom was cool as well, with the exception of the upper left hand corner, which was a little warm to the touch.

Throwing the T410s into the OCCT processor stress test quickly sent the temperatures skyward. The processor reported a maximum temperature of 71 degrees Celsius before the fan kicked in and cooled the processor down to around 60 degrees Celsius. The bottom of the laptop became uncomfortably toasty in this scenario, but the palmrest and keyboard remained cool. You’d never guess that less than an inch of metal, plastic and computer hardware was all that separated the two surfaces.

The T410s provides a decent number of connectivity options. Along its edges you’ll find two USB 2.0 ports, a combo eSATA/USB port, an Ethernet jack and a combo headphone/mic jack. The video outputs include VGA and DisplayPort, but not HDMI. Lenovo is one of the few companies that still offers docking stations for its laptop, and while these docking stations are not inexpensive, they are useful. The ThinkPad Mini Dock Plus Series 3, for example, includes 6 USB ports, additional audio ports, a physical security lock and the ability to connect up to three monitors in addition to the standard laptop display.