A quick brief on WHDI

The Galaxy GeForce GTX 460 WHDI is the world’s first graphics cards built around the Wireless Home Digital Interface standard and promises to bring uncompressed wireless video technology to the world of your PC and the power of the GTX 460 graphics chip. Does it work as promised and can WHDI really change the way you think about your HTPC?


Not long ago Galaxy asked if I was interested in reviewing a new GTX 460 graphics card they were working on.  After having my hands more probably a dozen or so SKUs based on that GPU from several card vendors, I was hesitant and asked if there was anything on this model that would really make it any different than the previous ones to pass through the PC Perspective offices.  “Most certainly,” came the reply and the idea of a high-performance NVIDIA graphics card with support for a wireless HDMI/video standard supporting uncompressed 1080p/60Hz video with near zero latency was detailed.  Thus was born the Galaxy GeForce GTX 460 WHDI. 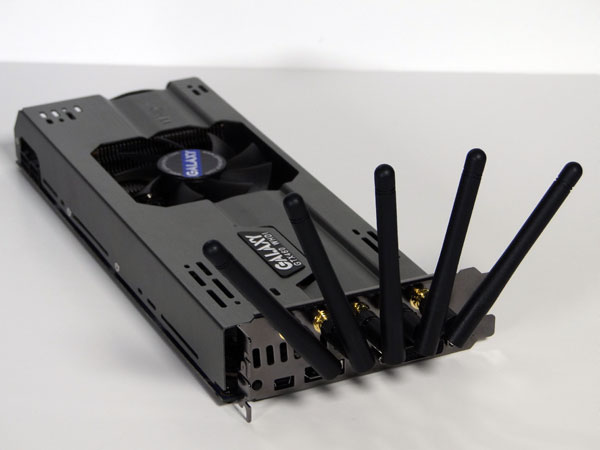 All of those funny looking WiFi-like antennas are there not for simple networking communications but instead enable the WHDI-enabled chipset on the card to communicate with a wireless video streaming standard known as the Wireless Home Digital Interface.  Having never worked with WHDI before receiving this card we did a bit of homework on exactly what WHDI was, how it worked and how it could really live up to the claims Galaxy was making.

Want to check out our brief video review of the Galaxy GeForce GTX 460 WHDI card before getting into the meat and detail of the written review?  See below!


What is WHDI, the Wireless Home Digital Interface?

WHDI is one a few standards competing for the consumer market as the multi-room audio, video and control connectivity option of choice.  The idea behind WHDI is to enable devices like Blu-ray players, set top boxes and of course PCs and notebooks to deliver content wirelessly to different output devices like TVs and receivers.  While first generation devices, like the one we are testing today, are more or less limited to a 1-to-1 connection where the receiver and transmitter are matched at the factory, the future of WHDI is to build an HD video “network” where any and all output devices with WHDI support will be able transmit to any and all input devices.  This includes STBs, PCs and media servers, etc.

If any of you are familiar with what Sonos has done with audio and what Apple is attempting to do for audio/video with AirPlay, then the idea of WHDI is pretty simple to grasp at first even though it has many more facets and complexities to it.  WHDI is an open standard that has been accepted by Hitachi, LG, Motorola, Samsung, Sharp and Sony – some huge names in the consumer electronics space.  Adopting WHDI doesn’t preclude the use of any OTHER standards, so the battle will continue to rage on which, if any, will really dominate.

From a technical perspective the WHDI standard operates in many ways just like the 802.11n standard by running on the 5 GHz frequency range and occupies bandwidth of 20 MHz or 40 MHz.  Because the 5 GHz spectrum has about 15-30 channels available for use with 802.11n or WHDI, the chips are intelligent enough to change channels to avoid conflict.  Past the use of the same spectrum, WHDI is quite unique in how it handles data.  While current video streaming over the 802.11n wireless standard CAN work, it treats all data in the same way and gives no priority to different types of information.  WHDI, on the other, sets up what are called “video modems” which are capable of handling completely uncompressed video signals of up to 3 Gbps (!!) and streaming at near zero latency.  How is this possible?  The WHDI FAQ page explains it quite well:


The WHDI video modem takes the uncompressed HD video stream and breaks it into elements of visual importance. The various elements are then mapped onto the wireless channel in a way that gives elements with more visual importance a greater share of the channel resources, i.e. they are transmitted in a more robust manner. Elements that have less visual importance are allocated fewer channel resources. The result of this unique video-modem approach is that any errors in the wireless channel are not noticed as they only affect the less visually important bits. Very high rates of video information can be transmitted because the human eye can tolerate the errors that fall on the less important bits. Traditional wireless technologies (such as WiFi) do not differentiate between the least important and most important information, and thus cannot deliver the bandwidth or robustness of WHDI.


Basically WHDI, since it is specific to audio and video, makes concessions to the data so that the most important information (color, etc) are given most of the bandwidth so you get a consistently high quality signal.  One thing to note here is that even the WHDI consortium notes that it is the “less visually” important data that might get dropped under extreme circumstances, so while the video quality might seem bit for bit perfect to that transferred over a physical HDMI cable, it might not actually be. 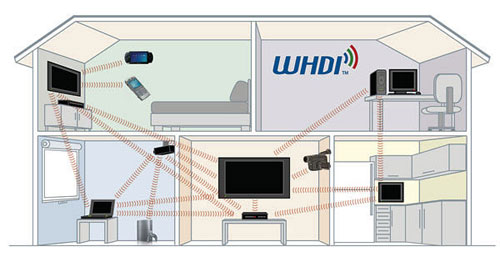 The future envisioned by WHDI


The WHDI standard of course supports HDCP 2.0 for protected content playback as well as EDID and HDMI CEC.

All of this technology means that WHDI offers some incredible stated features:
We tested the first three bullet points in this review (just keep reading) and we are hoping to see devices working on the mobile front later this year.  Now that we have a general idea of how the WHDI standard works, let’s take a look at the first product we have in house to utilize it, the Galaxy GTX 460 WHDI graphics card.

Both NVIDIA and ATI GPUs to be Launched at Computex?