After a few weeks of testing I think it is safe to say I was impressed with the performance of the 2nd Generation Intel Core Processor family and the Sandy Bridge architecture that powers it.  Even though we didn’t get any new world records or a super high-performance Extreme Edition part (yet), the Core i7-2600K and its quad cores with HyperThreading were able to beat out all the previous quad-core options and came closer than I expected to rivaling the Gulftown beast that is the 6-core Core i7-980X.  Its direct price competitor is the Core i7-875K and in every case the i7-2600K is faster, more flexible solution.

The Core i5-2500K and i5-2400 were also impressive performers though the lack of HyperThreading support obviously hinders them somewhat in those applications that are heavily multi-threaded such as media encoders and rendering engines. 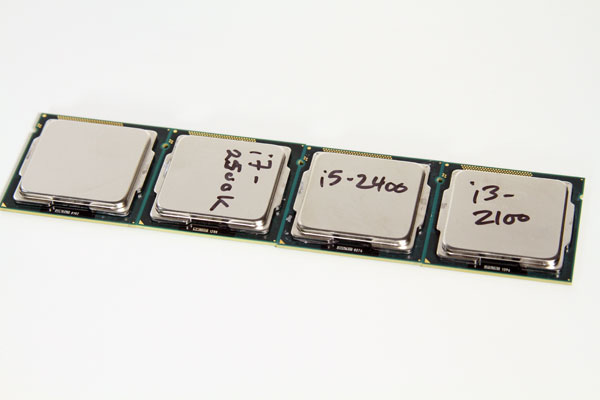 The Core i3-2100 was obviously last in the pack with its two cores with HyperThreading support and fixed 3.1 GHz clock speed.  With such a low price though its main competition comes from the Core 2 era still and while the Core 2 Q8400 is rivaling it some performance aspects, the performance advantages that come with the latest Intel HD Graphics 2000 and the Quick Video Sync make it the better choice.

The new Intel HD Graphics is without a doubt the fastest integrated graphics Intel has ever put on a consumer platform.  While the 2000 variant was only marginally faster than the processor graphics found on the Clarkdale CPUs, the 3000 variant was about twice as fast and really does make a noticeable different in creating a playable gaming experience in modern PC games.  I was able to run what I consider to be modern titles (StarCraft II, Left 4 Dead 2, F1 2010, Civilization V) on “medium” settings at 1680×1050 at acceptable frame rates.  The problem?  The Intel HD Graphics 3000 is only available currently on the K-series of CPUs that is actually aimed at overclocking enthusiasts – not the group most likely to use integrated graphics to begin with. 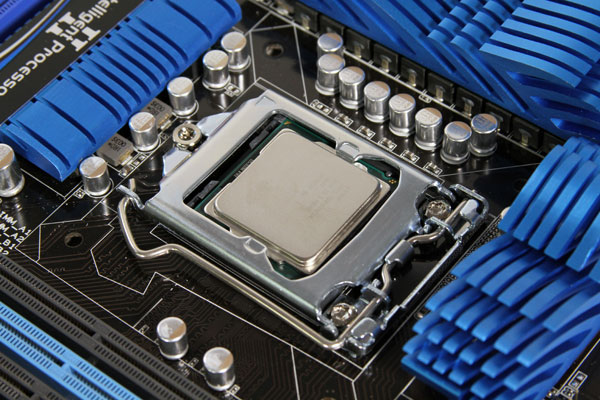 When Sandy Bridge was first being discussed it was considered cool to say that it would mean the end of the low-end discrete graphics market.  Based on my testing, I don’t think that is the case as even the $50-60 GeForce GT 430 and Radeon HD 5550 were able to offer a much better gaming experience than the 3000 variant of Intel’s HD Graphics.  The ~$30 Radeon HD 5450 does look like a victim of hardware consolidation but I would expect both NVIDIA and AMD to simply drop the prices on some of these other, faster discrete cards to stay competitive and to keep discrete graphics on everyone’s mind.

Intel has definitely been paying attention to the market and has really made the Sandy Bridge design with multimedia at the forefront.  Besides the new processor graphics implementations mentioned above, all the new processors offer support for Intel InTru 3D stereoscopic output (on H67 boards at least), Clear Video pre- and post-processing for videos, wireless display (on notebooks) and the oddly named, but very impressive, Quick Sync Video technology. 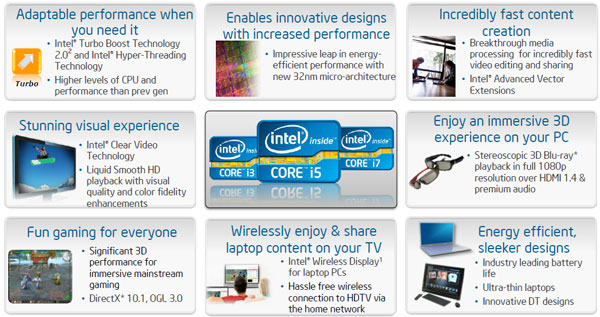 By moving the media encoding and decoding to a fixed function design rather than a more flexible programmable design similar to what Intel used before and what AMD and NVIDIA are currently doing, Intel increased the performance and efficiency of their product at the expense of extra transistors on the die and future-proofing.  My initial time with Quick Sync Video enabled applications looks very positive but I am curious if anything else will happen with the media processing technology in the future or if all we will ever get is this initial launch push and promotion.

All of the quad-core variants of the Sandy Bridge processors we looked at today should be available in the next week or so with the dual-core versions coming maybe a month later.  Intel’s street pricing looks like this:
All things considered, I think these prices are very compelling and it’s going to hard to keep the Core i7-2600K out of multiple locations on our Hardware Leaderboard for long.

Now that you know where the two new processors fit in terms of cost, who do they compare in that all important cost-to-performance metric? 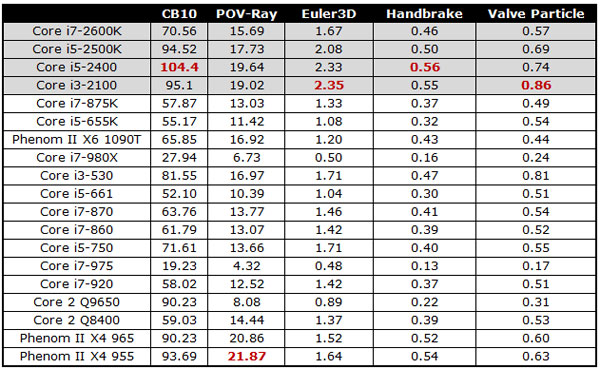 Because of those low prices, all four of the Sandy Bridge offerings we tested proved to be very competitive in the price/performance metrics with the Core i5-2400 and Core i3-2100 trading high scores on 4 of the 5 results listed in the table above.

Intel’s Sandy Bridge architecture is finally here and I was impressed at nearly every turn.  The Core i7-2600K should quickly become the mid-range processor of choice for gamers and enthusiasts alike with a combination of performance and value we haven’t seen in a long time.  Even the lower end Core i3-2100 and Core i5-2400 impressed on the performance front and are actually starting out lower than any Lynnfield processors on the market making them an easy selection for a budget build.  The inclusion of the Quick Sync Video is a great feature for consumers and should finally push fast transcoding to the entire market – something the GPU guys have been striving for years now.  If only Intel could figure out this whole Intel HD Graphics 3000/2000 segmentation thing, they might have had one of the best and most complete processor launches I can remember.  Even as it stands now though, the 2nd Generation Intel Core Processor family is again pushing Intel forward as the dominant microprocessor brand.