As I mentioned on the first page, there are than a handful of processors launching today, but we are really focusing on the mainstream desktop components here today.  This Intel provided roadmap below gives us some basic information on the pending product releases as well including the dual-core variants. 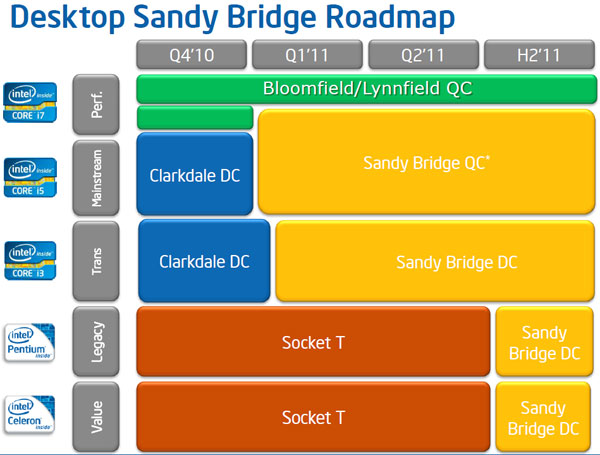 In both the desktop and mobile fronts, the only processors launching with immediate availability are the quad-core processors while we are told the dual-core versions will be coming very soon after.  The Nehalem-based Bloomfield processors are still listed through the remainder of 2011 as Intel’s top-level enthusiast option with Lynnfield keeping its head above water as well.  But based on some the performance we are seeing out of Sandy Bridge based processors, there may not be a reason for it. 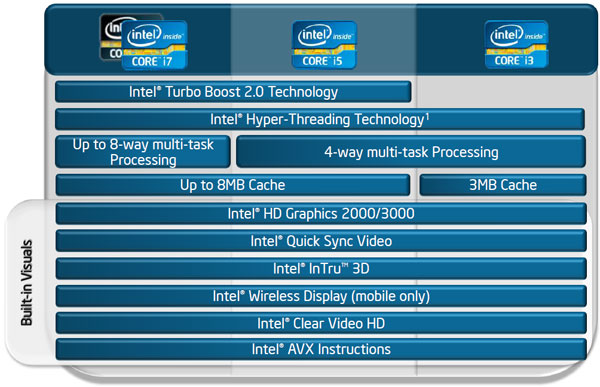 This time around, quad-core processors are going to be seeing the Core i7, i5 and even i3 labeling with other features now differentiating the lines.  The table above helps us keep the factors in place: TurboBoost doesn’t exist for Core i3 processors, HyperThreading is optional across all the brands though sometimes on two cores rather than four and cache sizes will vary up to as much as 8MB on the high end offerings.

All of the SNB processors (Sandy Bridge) offer support for Intel integrated graphics (though enabling it requires an H6x series motherboard for now) with two variants on the performance levels of said graphics systems.  Quick Sync Video is the very odd branding given to the hardware decode/encode engines on the CPUs, InTru 3D is for stereoscopic TV output via HDMI 1.4a, and AVX is the new 256-bit instruction set we have discussed many times. 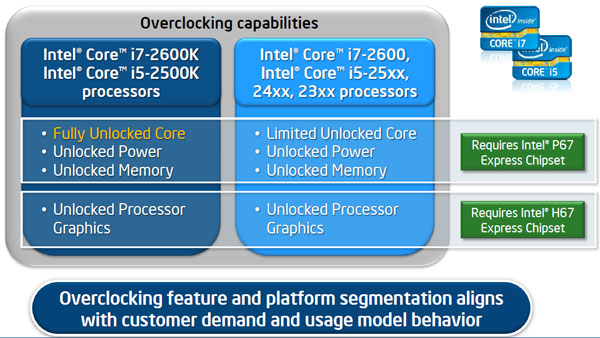 Overclocking takes yet another bend with this processor release and we’ll see that the “K-series” of CPUs is going to be much more important for enthusiasts looking to push their systems.  K-series parts will offer a fully unlocked core while all of the Core i7 and Core i5-25xx CPUs will offer unlocked power, memory and graphics speeds.  Note though that overclocking the CPU cores looks to require a P67 chipset motherboard while to play with graphics speeds you’ll need at least an H67 solution. 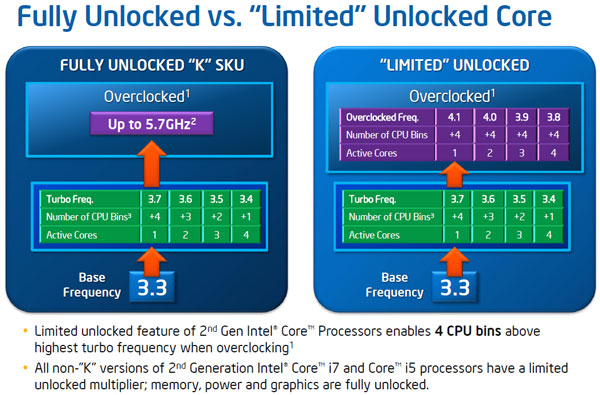 What exactly does a “fully” unlocked processor get you that a partially unlocked one does not?  In short it’s all about the Turbo Frequency multipliers.  With an unlocked K-series part you can push those limits to anything you want: we are seeing 48-52x multipliers in our initial testing as we approach the 5.0 GHz mark!  A “limited” unlocked part will only let you push the multiplier 4 speed bins higher than the standard TurboMode would push.  For example, a base 3.3 GHz CPU hits 3.7 GHz during normal usage but with the limited overclocking options you can get 4.1 GHz out of it.

These do turn out to be very hard limits as well; we’ll discuss this further in the overclocking section of this article. 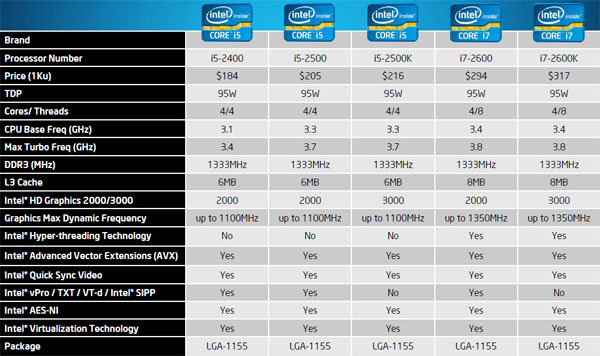 I said there were a lot of new processors launching today, and this is just the start.  This table represents the higher end of the Sandy Bridge CPUs that are going to be available starting with the highest performing Core i7-2600K with a base clock of 3.4 GHz, 8MB of last level cache and 3000-series Intel HD Graphics.  The specs compared to the standard Core i7-2600 only differ in support for vPro, 2000/3000 graphics, price ($23) and of course the ability to run fully unlocked.

The Core i5-2500 and 2400 are quad-core CPUs that don’t have HyperThreading enabled and only clock as high as 1100 MHz on the integrated GPU core. 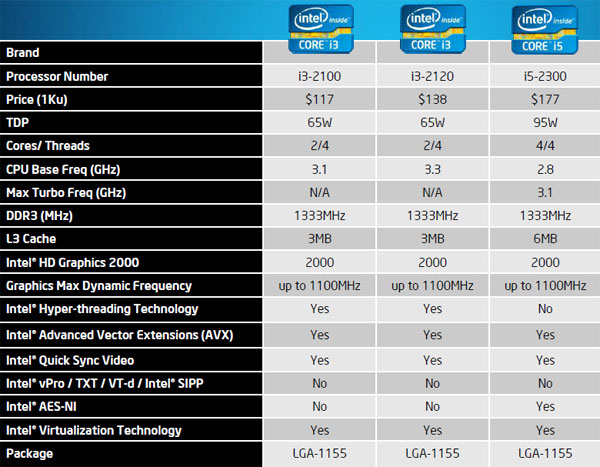 The Core i3 processors are more hobbled as they are dual-core CPUs with HyperThreading enabling four threads, but obviously at a performance disadvantage to the Core i5s.  Also, they don’t support Turbo frequencies and drop support for AES encryption acceleration – which is an odd feature to leave out if you ask me. 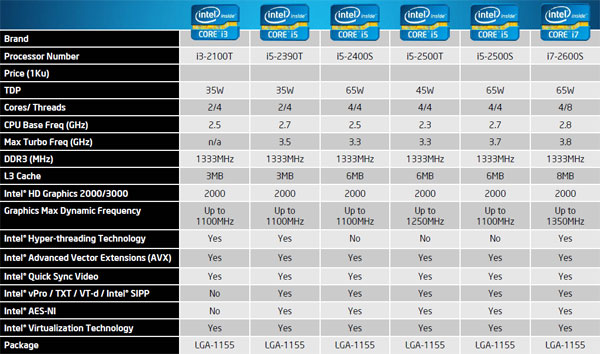 Above are six more SNB processors that fall into the low power categories going as far down as 35W TDPs.

One thing that might immediate stand out to you about this lineup is the odd placement of the Intel HD Graphics 3000: only on the K-series desktop CPUs.  This seems very counter-intuitive as users that are concerned about the overclocking scaling on their CPUs are more than likely going to be gamers and enthusiasts that have other discrete graphics options in their system, thus disabling and completely defeating the point of increased processor graphics performance. 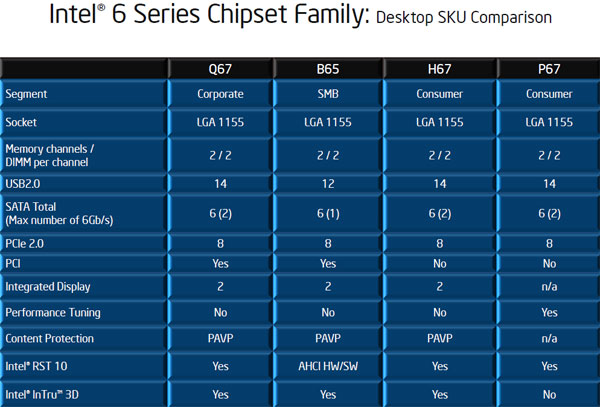 Finally, let’s not forget the new chipsets for the desktop platform!  The P67 and H67 are really all we are going to be seeing in the consumer space with the H67 offering support for the integrated display output and 3D output while the P67 gets performance tuning options left out of the IGP solutions.  Both chipsets offer 8 lanes of PCI Express 2.0 though which should be helpful for motherboard vendors looking to add on USB 3.0 support and more.