Likely the most innovative and potentially market shattering aspect of the 2nd Gen Intel Core Processor family is the updated graphics solutions that it brings along for the ride.  In many circles of industry, especially at NVIDIA, the fact that Intel likely has a graphics solution that cuts out the sub-$50 discrete market (both desktop and mobile) is a scary proposition.  But, I can’t help but wonder if Intel made some boneheaded mistakes to keep their competition happy.

By Intel’s own admission in their slide deck, the Intel HD Graphics 2000 solution offers only minimal performance gains over the current graphics solution found in the Clarkdale line of desktop CPUs.  The 3000 variant offers “additional headroom” and in our testing is the really killer solution.  Unfortunately for users that might actually want it on a desktop solution, only the K-series processors will offer the faster graphics option (3000) while the lower cost processors are limited to the hobbled option.


To test these new graphics platforms we used the Intel H67 “Bearup Lake” motherboard in conjunction with the Core i7-2600K (Intel HD Graphics 3000) and Core i5-2400 (Intel HD Graphics 2000) and compared it to the performance of the Core i5-655K CPU on the Intel DH55TC motherboard.  Comparison to desktop discrete options need to be made as well so I used these three:
These represent what I would consider to be a good sampling of the low-end graphics cards that are low-cost enough to be offered to entry-level PC users RATHER than integrated graphics.  Do AMD and NVIDIA really need to fear the performance of these new Intel processors?

I ran the configurations through 3DMark Vantage Entry and Performance tests while also adding in StarCraft II, Left 4 Dead 2, F1 2010 and Civilization 5 at 1680×1050 and modest image quality settings to get a good overall picture of modern gaming performance. 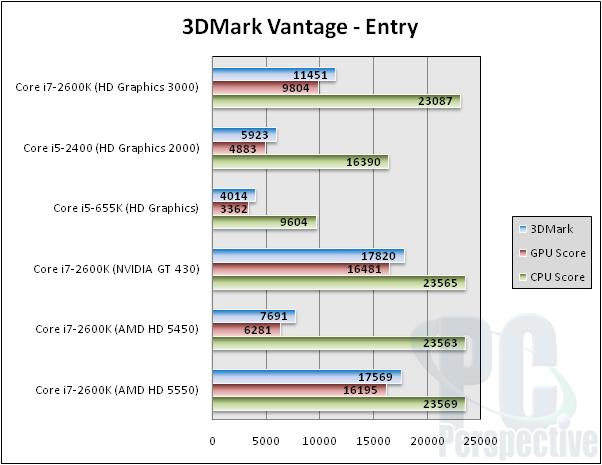 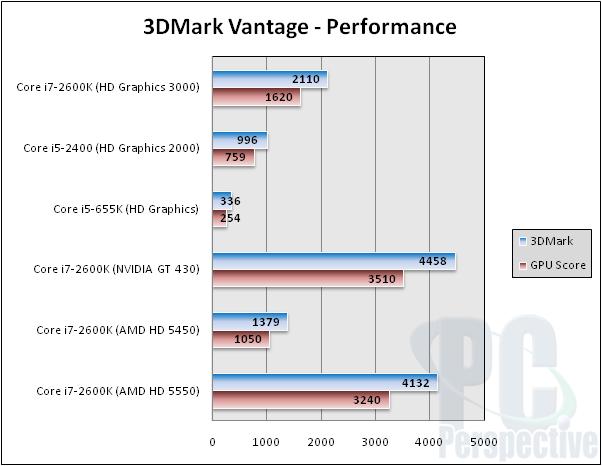 The performance differences between the 3000 and 2000 series of Intel HD Graphics is pretty apparent here – going from 6 EUs (execution units) to 12 makes a nearly linear jump in performance.  Both the GT 430 from NVIDIA and the HD 5550 from AMD are much faster than even the Intel HD Graphics 3000 while the Radeon HD 5450 falls behind it. 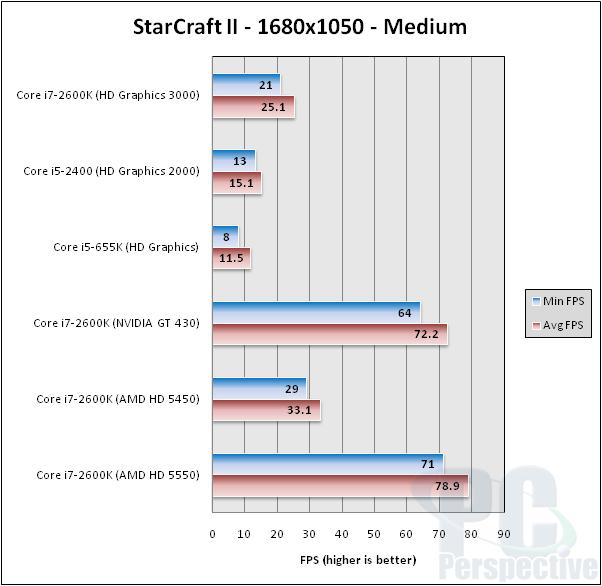 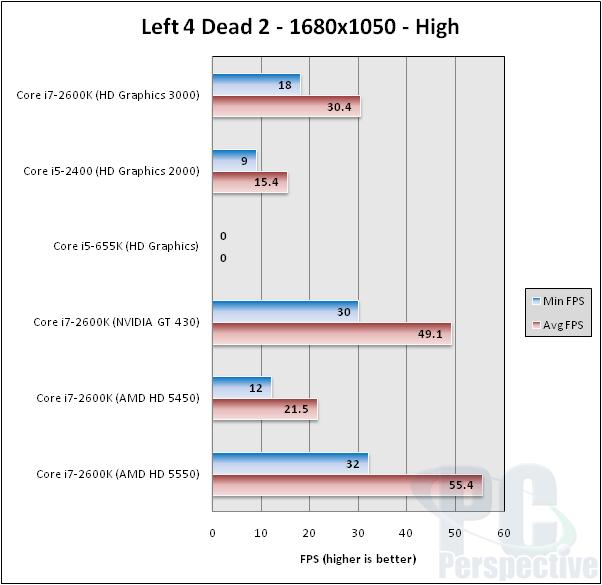 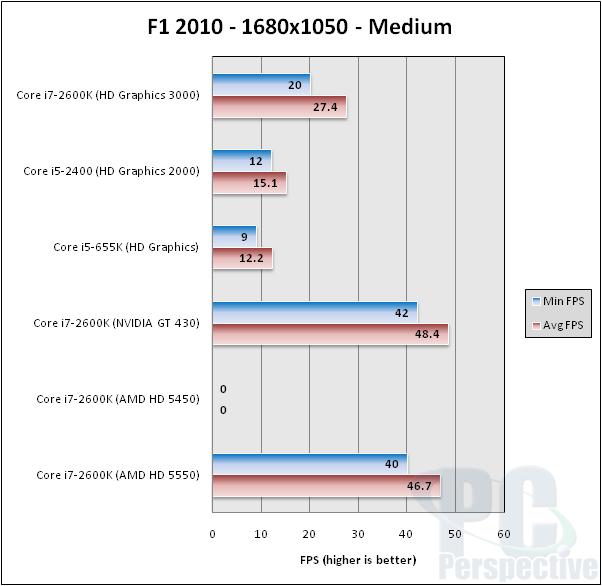 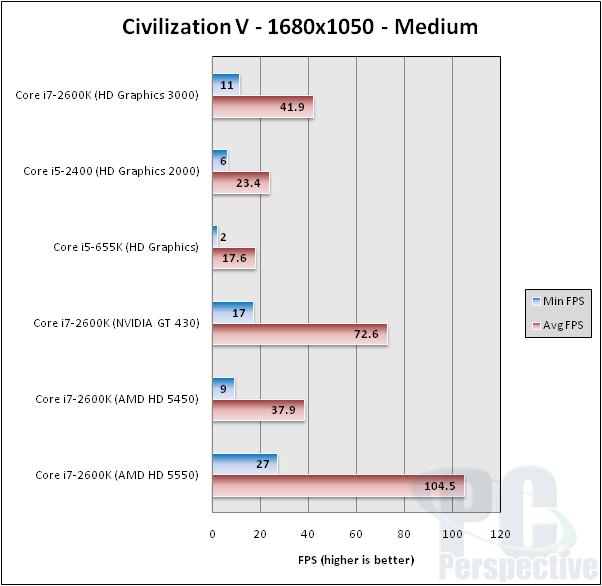 The results in our gaming testing are actually pretty impressive for Intel: going from the Core i5-655K to the Intel HD Graphics 3000 offers a 2-4x improvement in gaming and makes these modern titles actually very playable using the Core i7-2600K CPU.  The real drag here though is that the Intel HD Graphics 2000 option is only marginally better than the Core i5-655K making it less interesting for potential low-end gaming offerings.

Do AMD and NVIDIA have to be worried though?  Sort of.  Both the GT 430 and HD 5550 presented us with a much better gaming experience than even the 12 EU version of the new Intel HD Graphics but the HD 5450 (which represents the world of ~$30 graphics card pretty well) is definitely in a bind.  There aren’t many reason I would recommend that someone spend money on a card with that performance level rather than use the integrated graphics solution on the Intel K-series parts.

I still can’t get over the fact that Intel is only going to offer Intel HD Graphics 3000 on the K-series processors – it seems completely against logical thinking to do so.  If the $184 Core i5-2400 offered the same graphics performance as the $317 Core i7-2600K, it would be an automatic choice for a low end or SFF machine that might get modest games played on it.  As it stands now, the cheapest option for that is the Core i5-2500K that is still a decent option at $216. 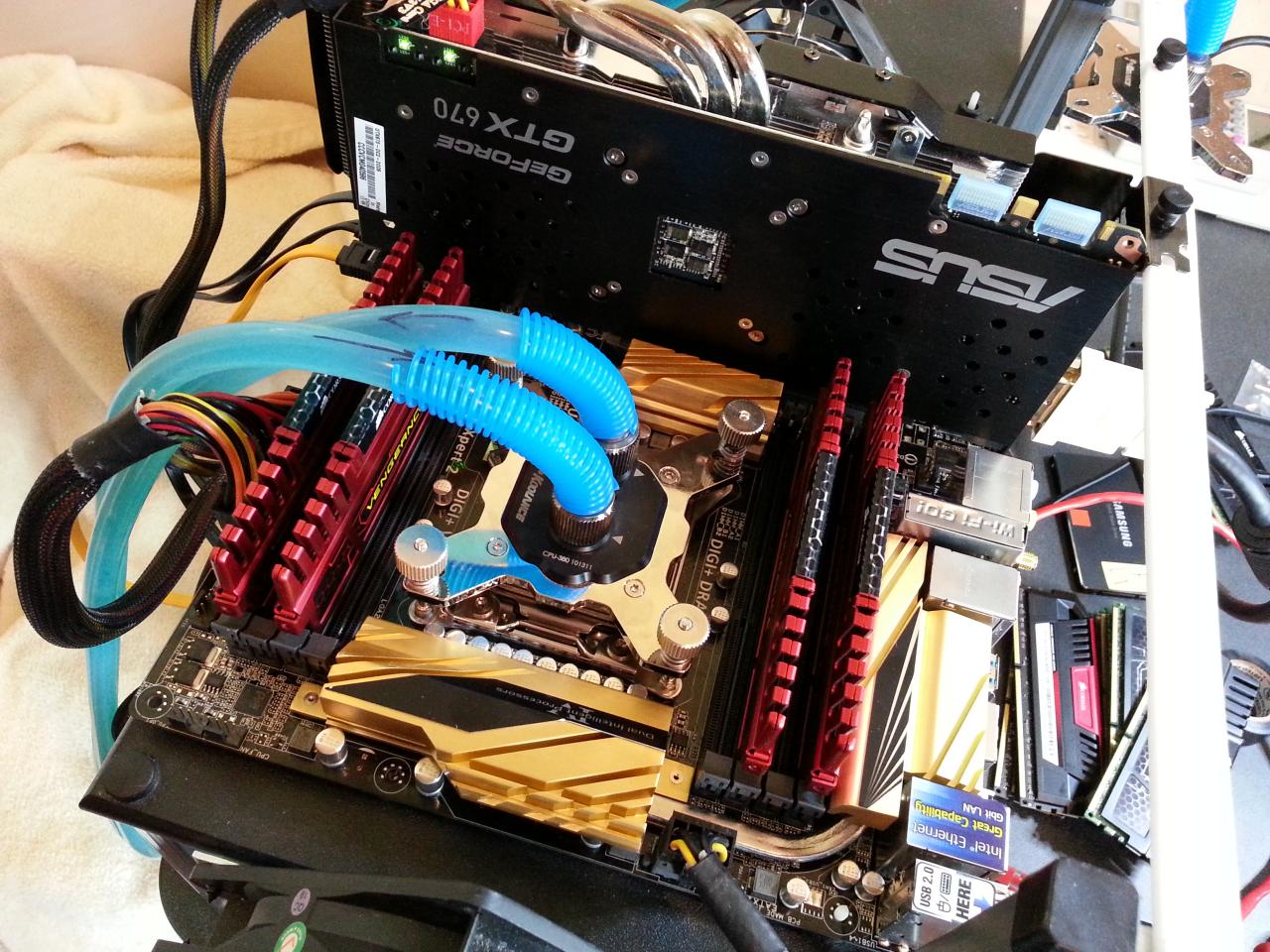