So you’ve read about the desktop version of Sandy Bridge – how will the mobile version compare? As a quad-core, 8-thread processor, the Core i7-2820QM is a powerful CPU that will make any mobile user drool. How does it, as well as the upgraded graphics, stand up against the Arrandale and older Core 2 Duo notebook platforms?

Let’s jump right to the chase here, shall we?  The Intel Sandy Bridge architecture, particularly the new processor graphics and media acceleration features, is going to be a bigger benefit to the mobile front than the desktop one.  In a market where battery life, power consumption and compute efficiency have become more important than raw performance, Sandy Bridge will find a home here in a wide range of notebooks including high-end, large screen machines and smaller, 10-13-in notebooks with goals of all day battery life.

I am not going to spend a lot of time detailing the architectural changes in this new generation of Intel processor; we already covered it extensively in our desktop CPU article.  You should definitely give that at least a cursory glance to get a good informational background on the features and specifications of the new 2nd Generation Intel Core Processor family.

If you thought the processors released for the desktop platforms were complete, the mobile side of things sees a total of 15 different SKUs on the table as well. 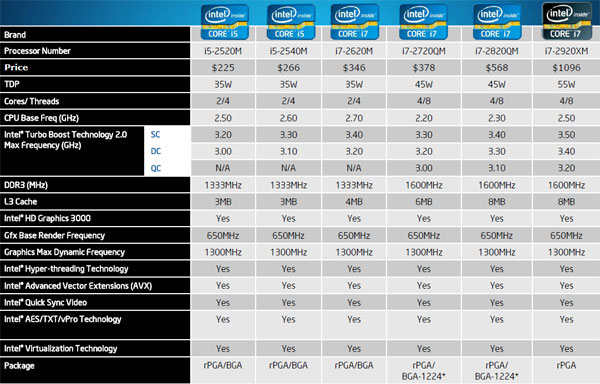 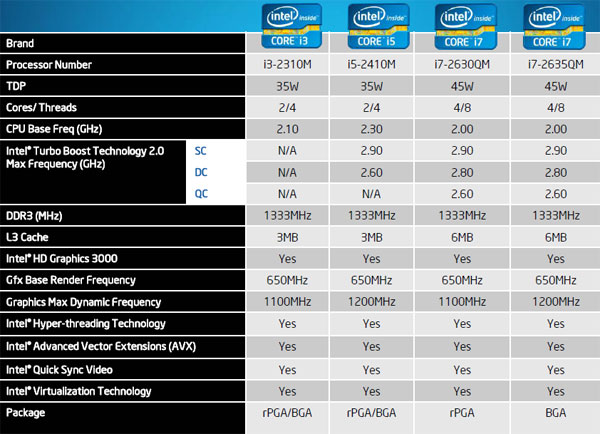 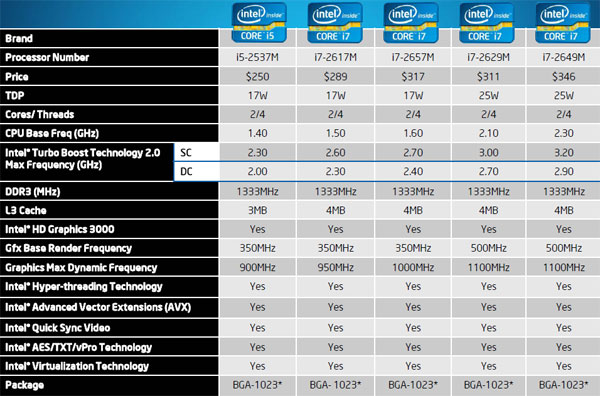 The new series of processors spans everything from the high-end Extreme Edition part, the Core i7-2920XM quad-core HyperThreaded priced just under $1000 to the Core i5-2520M dual-core HyperThreaded option for $225.  There some keys specifications though that differentiate all of these options from each other including thermal envelopes that range from 17w to 55w, base and Turbo frequencies on both the primary processing cores and the Intel HD Graphics and cache size.

One interesting note is that while I complained about the lack of Intel HD Graphics 3000 on any desktop parts but the K-series, ALL of the mobile processors sport the more powerful 12 EU graphics back end.  Clock frequencies vary though with base clocks starting at 350 MHz and going up to as high as 650 MHz and top speeds ranging from 900 MHz to 1300 MHz.  Based on several conversations we have had with mobile vendors, those clock speeds are going to make a BIG difference in the overall gaming power of these mobile machines again, could leave the window open for NVIDIA’s discrete GPUs.

For our first round of mobile Sandy Bridge testing Intel sent over a reference platform based around the Core i7-2820QM, the highest non-Extreme Edition option on the market.  This quad-core, 8-thread CPU has a base clock of 2.3 GHz and a 3.4 GHz top Turbo Boost speed with a single core at work. 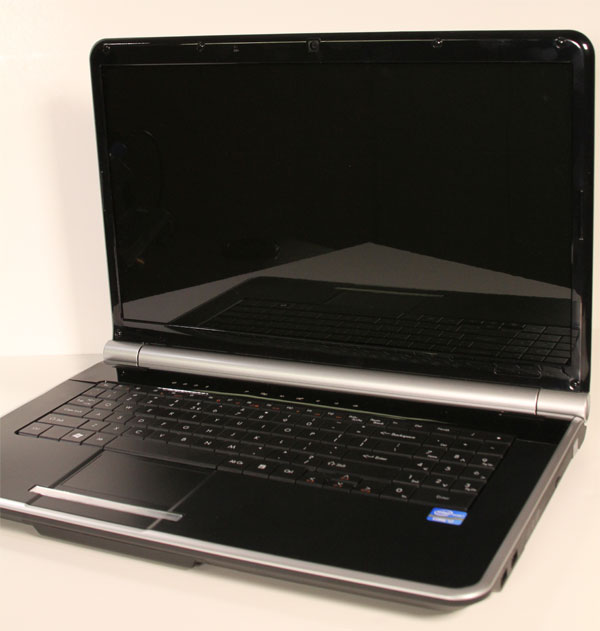 Obviously this is going to be a FAST notebook even without discrete graphics and I was curious to see how well the machine handled the same gaming scenarios we threw at the desktop platforms.

That does bring up an interesting issue though: the platforms we have to compare to this Sandy Bridge reference system are dual-core options.  Both the Arrandale and Core 2 Duo notebooks thus have an instant disadvantage of being able to work on half as many threads.  Also, the processor pricing on the Core i7-2820QM is a bit higher than the Core i5-540M from our original Arrandale review.

For now though, these comparison are what we have to go on; let’s see what results this new Sandy Bridge platform can surprise us with.