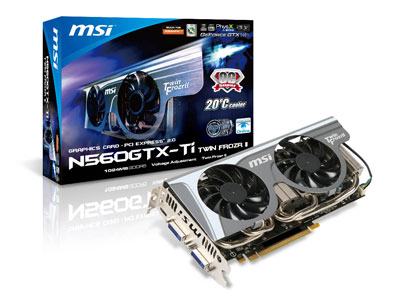 Exclusive Twin Frozr II thermal design lowers temperature by 20°C!!
The MSI N560GTX-Ti Twin Frozr II Series graphics cards are equipped with the exclusive Twin Frozr II thermal design, which uses a nickel plated copper base to absorb the heat from the GPU. Heat is rapidly transferred to the heat sinks via the SuperPipe technology and is then removed with the airflow produced by the large dual PWM fans. Compared with the reference thermal implementation, this new design is capable of reducing the core temperature by as much as 20°C, thus providing users with a low-temperature graphics platform.

Military Class components ensure high stability and a long lifespan
MSI uses Military Class components– the highest grade available– in the N560GTX Twin Frozr II Series graphics cards, such as Hi-c CAP— which are of the same class of components used in space shuttles and satellites and offer a lifespan 8 times longer than ordinary solid-state capacitors. Moreover, Super Ferrite Chokes (SFC) are employed to not only improve efficiency by 10%, but also increase the maximum output current by 30%, and when coupled with All-Solid capacitors, the product’s overall lifespan can be effectively extended.