NVIDIA has been preparing the new GeForce GTX 560 Ti 1GB card for quite a while now. I’m not sure I can say the same about the Radeon HD 6950 1GB card, but the results are the same. Two new graphics cards in the ~$250 range go head-to-head with each other for dominance in this lucrative price point and how they compare to other cards in that same segment.

It seems that no matter what month it is, you can be sure of a graphics card release is right around the corner.  While a bit over dramatic, we have another set of cards being launched this morning in direct competition with each other that target the lucrative ~$249 price range.

When NVIDIA released the GTX 460 graphics cards back in July of 2010 it addressed this same price segment that was left virtually untouched by AMD’s Radeon series.  Since then the GTX 460 has been the “go to” graphics cards for many of our readers and editors and anytime someone asks “Which GPU should I get?” it was almost a default answer to recommend it.  It offered a nearly perfect balance of performance, efficiency and price and it wasn’t until months later and several price drops by AMD that the battle really evened out with the release of the HD 6000 series.

NVIDIA is hoping to do the same thing today with the release of the GeForce GTX 560 Ti – yes the Titanium branding is making a comeback.

The new GTX 560 Ti is based on the GF114 GPU and is essentially the same core as the GF104 when looked at under that magical “diagram” microscope. 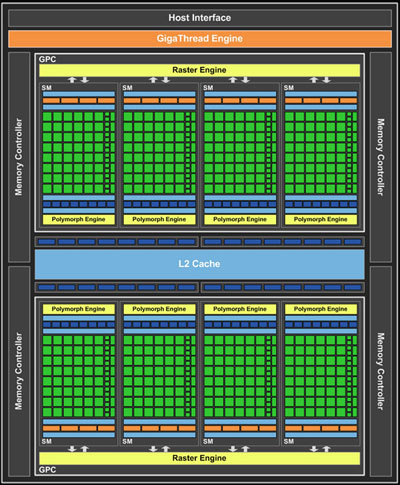 This should look very familiar to you if you have read our GTX 460 review linked above.  While the GTX 460 had only 336 CUDA cores with one of the SMs (simultaneous multiprocessors), the new GTX 560 Ti uses all 8 of them for a total of 384 total CUDA cores.  The process continues to be tweaked and as a result the GTX 560 Ti offers efficiency improvements as well as performance gains over the GTX 460.

According to NVIDIA’s information the new GTX 560 Ti will offer about 33% better performance while improving on efficiency by 21% or so.  That doesn’t mean it will use less power, but if these numbers hold up the results should be in the same ballpark.

Still pushing their advantages in the tessellation performance of the GF100 architecture compared to AMD’s HD 5000 and HD 6000 series, NVIDIA was sure to mention and discuss the various areas of gaming where tessellation is used today and how it will be more fully utilized in the future.  With all the discussion circulating AMD’s new 11.1a driver and the user-controlled tessellation slider, this debate will only be further aggravated in 2011. 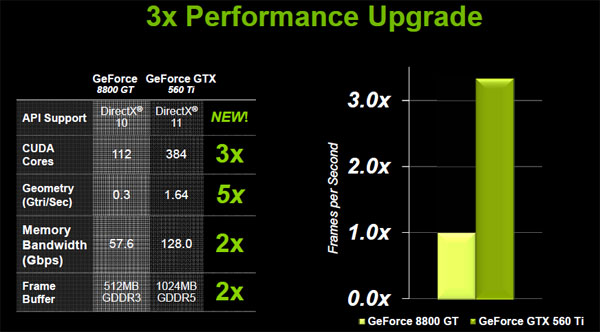 One thing we are often is asked is how the latest graphics card compares to some of the older options that still have a bit install base.  Considering that we have a lot of users still running on the 8800 series of cards (and likely, the very similar 9800-series too) this NVIDIA table shows what kind of raw performance benefits a user that chooses to move to the new GTX 560 Ti will see.  There are more than three times the number of processing cores / shaders and that should equal, coupled with the other specs, a very noticeable increases in frame rates on modern games. 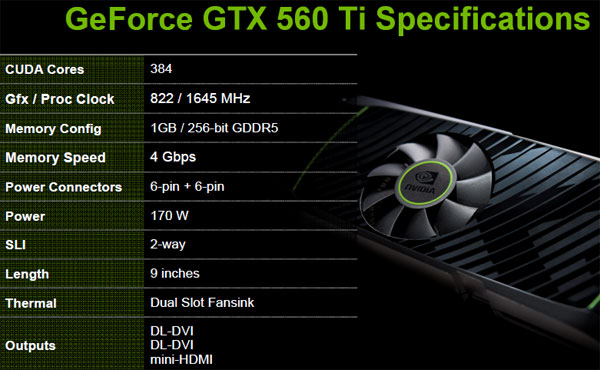 Obviously there are other specifications to know before fully understanding the new GTX 560 Ti.  We already mentioned the 384 CUDA cores and they will run at 822 MHz core speed and 1645 MHz shader clock.  There is a 1GB GDDR5 frame buffer running on a 256-bit memory bus that runs at 1000 MHz.  Just like the GTX 460, the GTX 560 Ti requires a pair of 6-pin PCIe power connections and will top out at a 170 watt TDP.  Everything else should be pretty familiar – standard size PCB, dual-slot cooler and a pair of dual-link DVI ports and mini-HDMI connection. 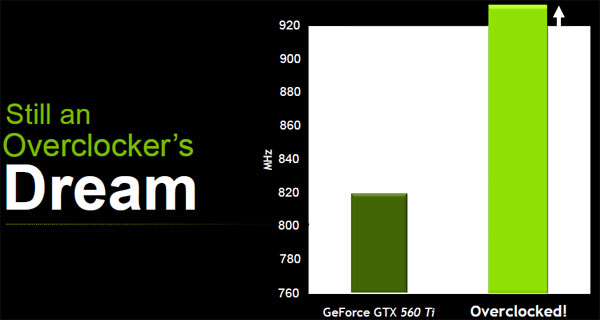 What’s more, just like the GTX 460, NVIDIA is coming out of the gate claiming that the GTX 560 Ti is a great overclocking part.  Usually, this means that initial retail samples will come out of the gate with some pretty high clock speeds over the reference settings – there are rumors of a 1.0 GHz model running around but we haven’t seen it yet.  After our initial reference testing in this article we are planning on running a quick roundup of a few retail units we received this week to see what speeds and differences each of them offer.