AMD is unleashing a… marketing campaign. Ok, we were hoping that with the Sandy Bridge bug and its delay, AMD would step up and release at least some new CPUs and perhaps the new AM3+ platform. But alas, we take a look at the only official response to Intel’s stumble. While this is a new trick from AMD, will it be enough to gobble up some business that Intel left on the table by pulling Sandy Bridge parts from the market?

Golden opportunities are very rare in the world of business.  When they show up, a business should attempt to capitalize on them as much as possible.  In the CPU world this is certainly true.  Opportunities to unexpectedly trump a competitor, to snatch business away, or to completely dominate for a time are few and far between.

In the past we have seen examples of this.  AMD was originally able to gain some significant marketshare in the early 90s with their versions of the 486 architecture, which culminated in products being clocked significantly faster than what Intel offered (such as the 486 80 MHz, and the final iterations of the 486 133 MHz and 586 products).  The Pentium F-Div bug also gave AMD some extra space to move in, as the original Pentiums were expensive, hot, and had that annoying FPU issue for scientific uses.  For about three months in 1997, the AMD K6 was the fastest processor on the market.  In the late 1990s AMD was able to introduce the original Athlon, which was a far more scalable, and slightly faster per clock product than the Intel Pentium !!!.  AMD was able to do this again in 2003/2004 with the Athlon 64 architecture, which was far superior in nearly every category than the Intel Pentium 4.

Intel has always recovered with products that have then dominated the competition.  Intel fixed the Pentium bug and added in exciting letters such as “MMX” to their products.  The Pentium 2 was released some months ahead of schedule to cut off AMD’s K6 from achieving any kind of marketplace traction.  The Pentium 4 was able to scale far above that of the Athlon and later Athlon XP.  Finally we had the Core 2 series of chips that dethroned AMD and the Athlon 64, and has led to the later Core series of parts which currently dominate the performance landscape. 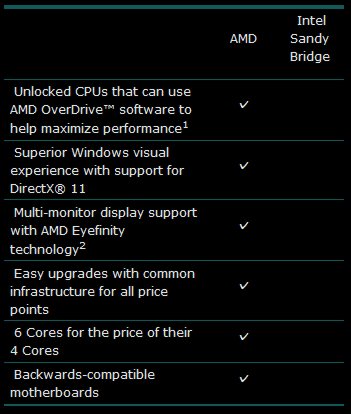 Ok, so this is marketing at its finest.  Some checkmarks hold water, others not so much.  At least the attempt is there!


Intel looked to have another lock on power with the release of the Sandy Bridge series of chips, which were first introduced into the midrange market.  The highest performance versions of these chips easily topped that of AMD’s 6 core variants, and we looked to be settling down again for another season of Intel being on top.  Then the chipset bug which affected all motherboards that support the new Sandy Bridge products reared its ugly head.

A seemingly insignificant transistor placement would eventually cause the SATA II implementation to drop the drive connections.  Everything would seem fine, and then suddenly all drives attached to the SATA II ports would be gone.  Very few examples of this were actually discovered in the wild, but extreme testing by partners eventually exposed this issue.  Intel was able to replicate it, determine what caused it, and make changes in production to fix the bug.  Intel did work very quickly to get word out, and suddenly Sandy Bridge was off the market.  The SATA 6G implementation was unaffected by the bug, but this provides only two SATA ports to any particular implementation.  While this may be appropriate to use in products such as laptops which rarely have more than two drives anyway (HDD and optical drive), it is not the case for desktops.

Intel estimated at the time that it would be able to ship fixed chipsets to its manufacturing partners, and users would be able to purchase Revision B3 based motherboards by an early April timeframe.  The “bug” is estimated to cost Intel in the area of $1 billion USD.  This includes approximately $300 million in lost sales and another $700 million to replace defective motherboards.  While $1 billion is not exactly pocket change for Intel, it should not dramatically decrease the overall value of the company.

If there was to be a benefactor of such a trip up, it would be AMD.  Last year AMD was able to introduce the first integrated SATA 6G solution on a chipset with the SB850.  This implementation has proven itself to be a step above previous AMD based chipsets, and with being out for around a year now there are no major or minor quality issues.  We have seen a smattering of SATA 6G supporting devices in that time, but with the support Intel has finally thrown behind SATA 6G this year, we are about to see more which will actually fully utilize the faster bus connection.

A logical lineup of products that fit every budget.  Note that the AMD CPUs and boards are available today, while it is awfully hard to pick up a Sandy Bridge motherboard.


Oddly enough, when news first broke about this issue, AMD had no plans to change anything they were doing.  Marketing was surprisingly quiet, and when queried about any potential plans to capitalize on Intel’s setbacks there were no definitive plans.  Many thought this somewhat odd, as the temptation to tweak Intel’s nose was seemingly too great to pass up.

Fast forward to the second week of February and some eagle eyed viewers spot a somewhat interesting advertisement on PCWorld.  The ad simply stated “Ready.  Willing.  And Stable” with an AMD logo attached.  This was obviously the first salvo fired off from AMD designed at undermining quality and stability concerns about Intel and their Sandy Bridge parts.  Unfortunately, the link that the ad was forwarding users to was dead.  But at least it was something from AMD. 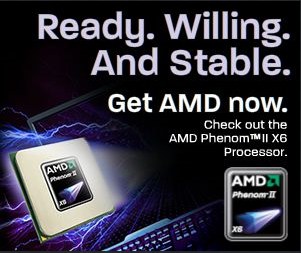 Worth a small chuckle to people in the know.


This week we finally see the full on blitz that AMD has been able to prepare.  The “Ready.  Willing.  And Stable” ad campaign is actually one of the first that AMD has done aimed directly at consumers.  Throughout the years we have seen CPU ads primarily aimed at the server business, and this is not necessarily surprising considering AMD has a far smaller ad budget than Intel.  Other advertisements and campaigns have also been centered around the graphics arena and the new Fusion processors.  PC Perspective was actually chosen as one of the advertising partners for this particular campaign.

Unfortunately for AMD, this is unlikely to provide much of a boost to sales in the near to long term.  There are several reasons for this.  Intel still has very compelling products in the Core i7/i5/i3 lineup that are not Sandy Bridge based.  These chips are all based around the X58, P5x, and H5x series of chipsets.  These particular products have a very good track record, and there are plenty of supplies on hand at both retailers and OEMs alike.  So while major manufacturers have had to stop production of Sandy Bridge based systems, they have many current Intel series based machines that could easily take their place.  In some instances, these manufacturers might promote some of the AMD based systems that utilize the SB850 southbridge to provide native SATA 6G connectivity.