“Yeah, but does it play Crysis?”

That has been the tag line for new graphics card releases since the game was released in November 2007.  It was one of the first PC titles to run under DirectX 10, used about 1 million lines of code and has about 85,000 shaders, according to Wikipedia.  As such, the game became synonymous with games that required too horsepower to run on the majority of users hardware and in some circles, highlighted the decline of PC gaming and the rise of one-size-fits-all console gaming. 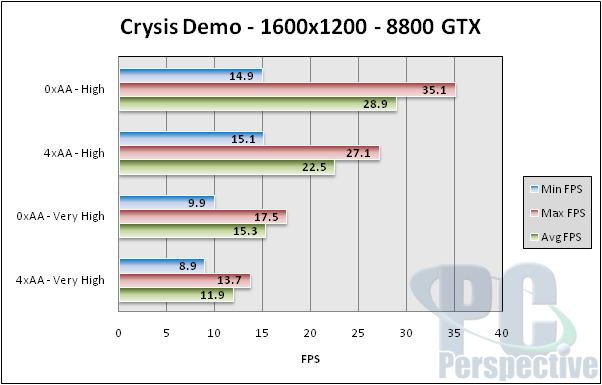 This graph is from our first performance evaluation of Crysis and uses a GeForce 8800 GTX, published in October 2007.  You can see that 16×12 resolutions were very hard and things never really got better for the game with multiple patches.  Only the inevitable march of GPU progression (and CPU performance to some extent) made this game playable.

Well, Crysis 2 is nearly here and will be using the updated CryEngine 3 for development on Microsoft Windows, PlayStation 3 and Xbox 360.  Because of that, the game should be less destructive on our hardware as well – good news for gamers, not so great news for AMD and NVIDIA that want to sell GPUs.  But Crytek released the minimum system requirements today as well:
Looks pretty tame, doesn’t it?  The 8800 GT is more than three years old and thus should be more the accessible to everyone reading this.  I am sure that the game will look profoundly different at the minimum settings as opposed to the maximum settings, and I am eager to get a hold of the early gold sample to do some testing.


Do you think the specs for this game look too low or too high?  Let us know in the forums!