Lucid says that its Virtu software performs “GPU Virtualization” technology in order to achieve what it does.  That term might not make a lot sense as it’s stated but in many ways this software was aided by the work Lucid did on HYDRA. 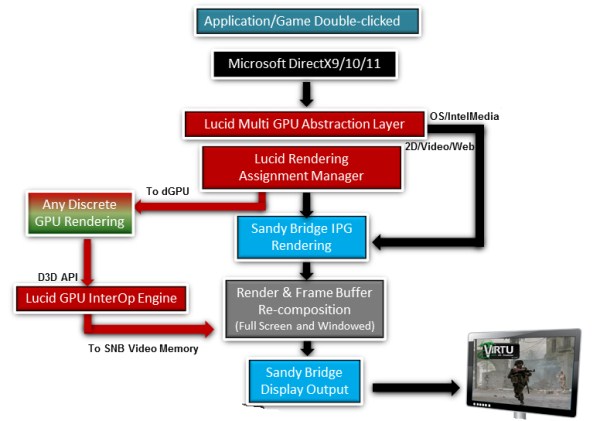 The Lucid Virtu software is a layer that actually rests below any discrete or integrated graphics driver and just above the DirectX layer.  This allows the software to intercept calls to specific executable files and assign those commands to a specific GPU.  One note here though is that currently only DirectX games are supported – OpenGL is not compatible with this software solution.

To be sure, this is a completely software based solution – no Lucid or other vendors hardware (other than both a Sandy Bridge processor and discrete GPU) are required for it work.  The HYDRA technology that Lucid also offers for discrete GPU scaling enhancements does require both a hardware and software implementation; Virtu does not share that trait.

This abstraction layer is responsible for sending individual tasks to either discrete or processor graphics as well as merging them back again into a common frame buffer.  The flow diagram below shows that for a game running on the discrete GPU, the resulting images are actually sent to the frame buffer of Intel’s HD 3000/2000 graphics rather than to the cards own frame buffer.  This is allows the Intel display outputs to properly display the workloads being rendered on BOTH GPUs.

Other tasks like general Windows usage, video and web applications are still run through the Intel HD 3000/2000 graphics cores since they are definitely more efficient than the large power hungry discrete cards.

This does lead us to one of the caveats to the Virtu technology – the monitors MUST be connected to the display outputs on the Intel motherboard.  Multiple monitors are supported by most H67/H61 motherboards (and upcoming Z68 offerings) though the combination of those outputs will vary quite a bit based on which motherboard you decide to go with.  For the majority of gamers that are using a single DVI or HDMI display, this isn’t really going to be a problem but if you were used to have dual DVI inputs or even a triple display configuration with your HD 5000/6000 series GPU, those aren’t going to work here. 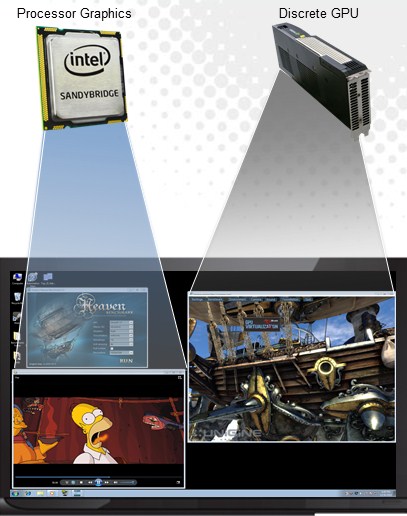 The flexibility of this solution is impressive as it will allow you to run applications on both discrete and integrated GPUs at the same time, in full screen mode and also in windowed modes.  This image above shows a system utilizing the Sandy Bridge graphics for the video playback while running the Unigine DX11 benchmark on the discrete solution. 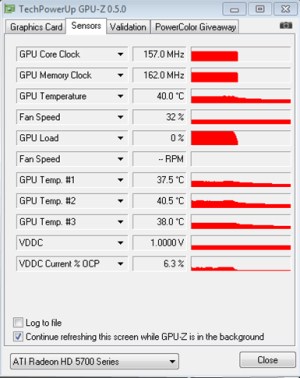 When a system is not running any applications that on the discrete GPU then the graphics card is powered down to an idle state just like you would expect.  While it doesn’t work today, Lucid says they plan on being able to completely power down the PCI Express slot that the GPU is running in to power it down to basically zero.  (This is what NVIDIA’s Optimus technology is able to do on notebook platforms today actually.)

Lucid likes to claim that this technology makes your PC more “green” and power efficient – and while that is true to some degree I don’t think that is the selling point of this software.  The key is that users will be able to fully utilize both of the GPUs and the features of each without having to reboot their computers, move video cables, etc.

But how is this software integrated for the end consumer?