As I mentioned on the previous page, there were several test cases we wanted to verify functionality with for Virtu software and then of course we just wanted to play around with it enough to see if we could try and break it – the usual stuff here.

The first application we used was CyberLink’s Media Espresso software – the same one we used in our initial Sandy Bridge review with support for Intel’s QuickSync technology for incredibly fast transcoding support. 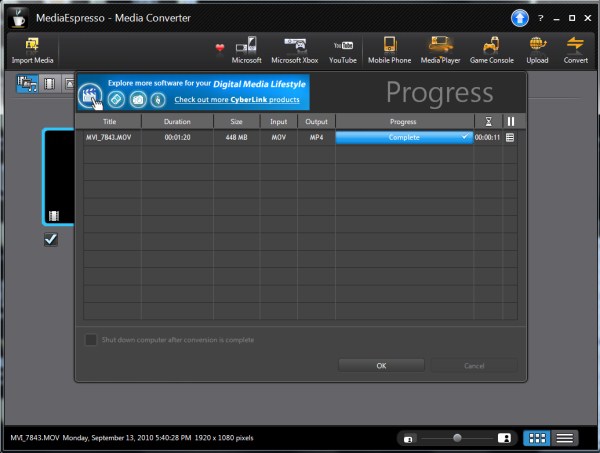 First we ran a transcoding task that converted a video file from our Canon 7D (about 500 MB, 1080p) to a format more suitable for the Apple iPad on the system with ONLY the integrated graphics installed.  After that we installed the discrete graphics card and ran the same test.  Finally, we installed the Virtu software (of course we configured the Virtu setup as explained on the previous page) and ran the test again to see how the results stacked up. 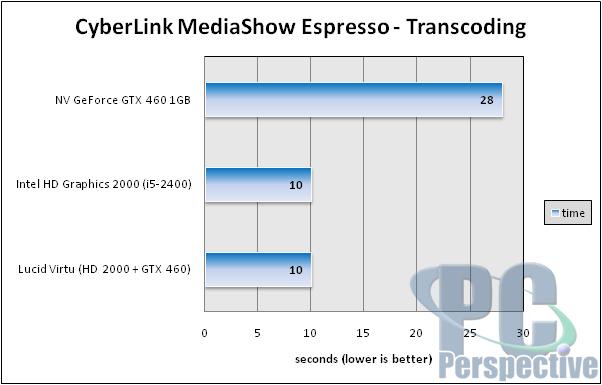 Our first test case indicates that Lucid’s Virtu software is giving us the best features of both GPUs by utilizing the QuickSync technology to encoding our video at 10 seconds or so compared to the 28 seconds using Media Espresso’s CUDA implementation.  But, we expected at least this as the displays were connected to the motherboard during Virtu testing.  How do the games fare though?


For my next test I used 3DMark Vantage just to have something quick and easy to run that was graphically intensive and that would show a noticeable difference between Intel HD 2000 graphics and the GeForce GTX 460 1GB we used in testing.  The same three methods were used (IGP only, discrete only, Virtu configuration) to see how the benchmark fared. 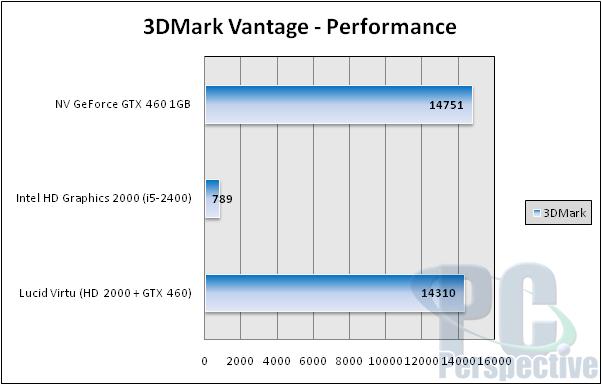 Clearly the software is working as intended – the performance results with the discrete GPU plugged into the display were nearly identical to those when plugged into the processor graphics ports while running Virtu.  Without the Virtu software the Intel HD Graphics 2000 was only able to pull in a score of 789 points while the GTX 460 was able to get about 14,500.


The next text I ran was actually Left 4 Dead 2 – though only after I ran it on all three configurations did I realize that the game was NOT on the whitelist and that I wasn’t able to add it manually with this demo version of the software.

After discovering this issue I went ahead and made sure I had some other games installed on this test rig that WERE on the white list so I could verify that Lucid’s Virtu software worked as promised.  I ran both Civilization V and F1 2010, and those worked just as we expected. 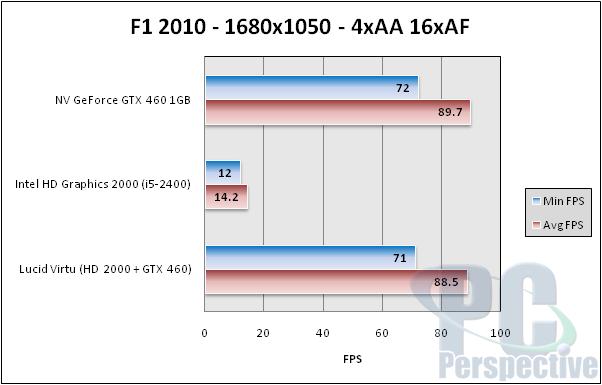 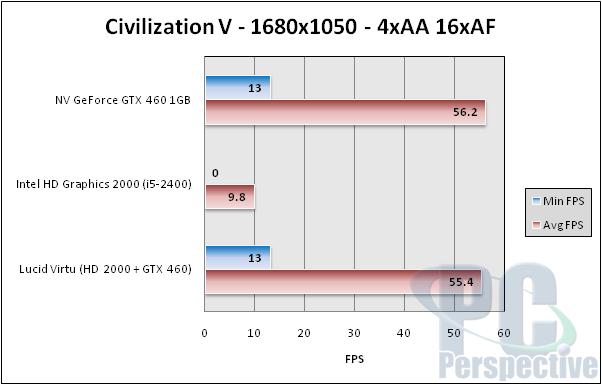 Both of our tested titles here showed the results that Lucid promised us – the results between the Virtu configuration and the discrete GPU only configuration were pretty much identical and left the integrated Intel Sandy Bridge graphics well behind.


The last test was little more complex as I wanted to make sure that both GPUs could operate independently and still with appropriate performance.  Here I took the F1 2010 benchmark (mostly because it would operate in a windowed mode so we could see both apps going at the same time) enabled DX11 features (to verify the discrete GPU was at work not the IGP) and simultaneous opened CyberLink’s Media Espresso to run the same encoding process shown in our first test above.

The goal was simple: did the transcoding operation run at the same (or nearly the same) performance levels without drastically affecting the performance of the F1 2010 test run?  It is fair to see SOME performance hit on both applications since CPU utilization needs to be considered, but those should be minimal. 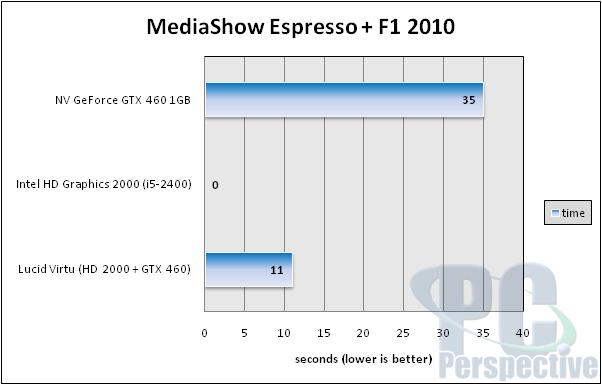 Here you can see that while running the F1 2010 game in the background we were able to get a similar score of 11 seconds; obviously faster than the app running on the NVIDIA GTX 460 and just a tiny bit slower than when running without the discrete GPU installed at all.  These are pretty good results for our first testing run.


Finally, one of the keys for Lucid’s Virtu software is that the discrete GPU has the ability to downclock to reasonable power consumption levels.  With the GTX 460 1GB card we saw the clock speed fall to 50 MHz or so when it wasn’t in use (just as the GPU does when it is the primary card) and jump back up to the ~750 MHz level when initialized for gaming purposes. 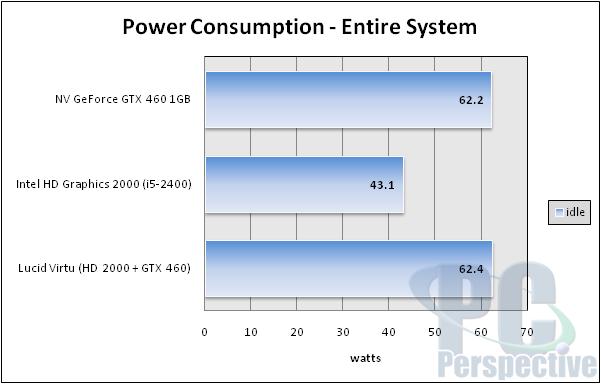 However, there is a problem…

For all the good experiences we had with the NVIDIA GTX 460 1GB card, we had an equally frustrating time with the AMD side of things.  I tried a Radeon HD 6870 1GB card first (that would never actually run faster than the integrated graphics), followed by a Radeon HD 5850 (which worked sometimes but locked at 400 MHz clock speed) and finally tried a Radeon HD 5770 (that stayed clocked at 800 MHz the whole time).

To say I was tired of messing with Virtu at the time would be an understatement.

After trying the HD 6870, the Radeon HD 5850 SEEMED to be working until I realized that the clock speed was indeed being locked at 400 MHz.  Not only does that mean that performance wasn’t as high as it should have been (standard clock rates are about 800 MHz) but the power consumption remained a solid 20 watts higher than when the discrete graphics were running alone.  It basically defeated the purpose on BOTH sides of the story. 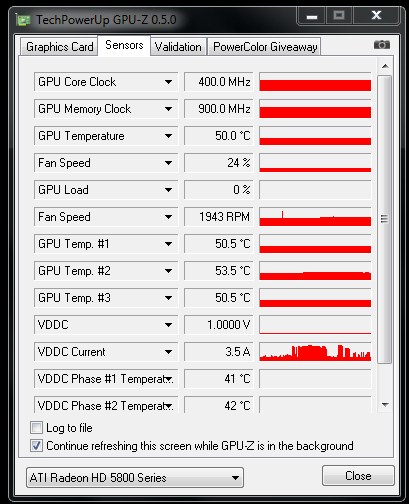 That being said, the Virtu software appeared to be doing its job still.  Even on the HD 5850 and HD 5770 with their GPU clock issues the games and applications were being sent to the right GPU according to the profiling we saw with the NVIDIA card as well.  But with the seemingly random clock speeds at work, performance was not where it should have been.

The problem seems related to be either the 11.2 AMD driver or some operating system issue as even without the Lucid software installed, GPU-Z showed the same static clock rate of 400 MHz on the HD 5850 and 800 MHz on the HD 5770.  We are working with AMD and Lucid to figure out what was going on here exactly, but based on the success we had with the NVIDIA GeForce GTX 460 1GB card and the Virtu software above, we are going to give Lucid time to figure this out before the first motherboards are released with this option included later this quarter.

Queer as a three dollar bill