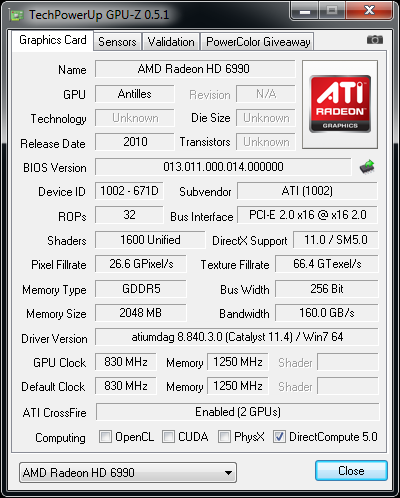 Here you can see the standard settings on the Radeon HD 6990 4GB card.


For today’s review we are going to be comparing the new HD 6990 graphics card against the best both sides have to offer.  The retail price on the Radeon HD 6990 will be $699 so one grouping is as follows:
These are basically a grouping of the worlds best currently available single graphics cards though it is obvious the HD 6970 and GTX 580 are going to be at a disadvantage using only a single GPU compared to the pairs in the 6990 and 5970.  But we aren’t here to take sides, but rather to show you the results.

With the cost of the HD 6990 4GB being so much higher than that of the HD 6970 and even NVIDIA’s GTX 580, a better comparison might use some SLI and CrossFire configurations to see how the performance works out in terms of raw pricing.
This is quite a mix of components here but I think it makes for a good scenario is just looking at the raw dollar amounts associated with different gamers’ configurations.

*Note*  Yes, I realize that we didn’t test the “overclocked” settings for the Radeon HD 6990 4GB card with the included switch on top of the PCB.  Our testing was brought short and basically we ran out of time due to the incredibly tight schedule.  More on that later!