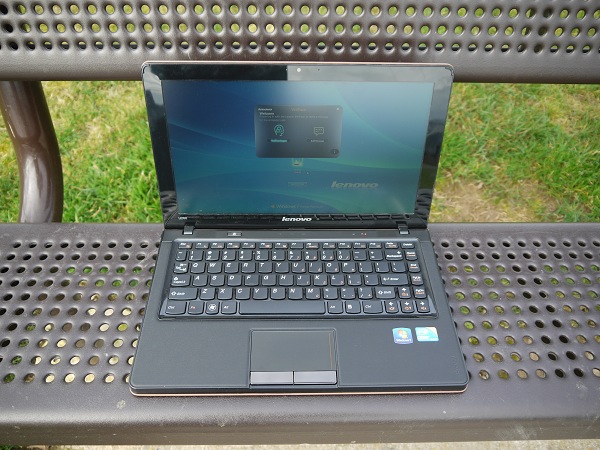 If there was any doubt that the U260 is Lenovo’s present to nay-sayers about notebook quality, the display should dispel it. Why? It’s matte!

I can’t remember the last time I used a consumer laptop with a matte display. It’s an exceptionally rare trait because glossy displays look better in stores or some such marketing hocus-pocus. Lenovo, however, has resisted the urge to slap a big glossy panel on its otherwise fingerprint resistant device.

This comes with advantages and disadvantages. The display on the U260 is bright, which means that the laptop can be used with some degree comfort outdoors at maximum brightness. The 1366×768 resolution, combined with the small 12.5” physical display size, ensures that details such as small text look sharp. Colors aren’t bad, either. The main problem is the black level performance, as dark scenes in movies and games can become very muddy. However, it’s worth noting that I’ve seen worse black level performance out of some glossy-coat displays. 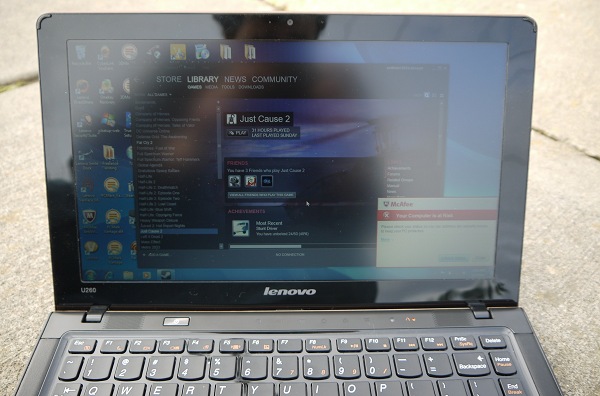 Audio quality falls flat. This isn’t surprising, as Lenovo hasn’t bothered to slap any branding on the two tiny speakers mounted just above the keyboard. They’re simply there, and they serve to render with apathy the daily beeps and boops of the Windows operating system. Playing music or games isn’t going to make you want to slice your ears off, as there isn’t much distortion as your ramp up the volume. The issue is instead the total lack of bass. Music sounds as if it is being played from a clock radio in your neighbor’s apartment; flat, tinny, and distant.

Cramming hardware into small spaces always has consequences. Heat generation is usually one of these, and it’s a major challenge for any laptop with a small frame to keep its cool. The U260 uses a technology called Breathable Keyboard to deal with the heat. Instead of relying on a fan port built into the side of the laptop, air flows through the keyboard and through the bottom of the device. But don’t worry – you’re not going to be feeling the breeze on your fingertips.

While this technology is a contributor to the U260’s slim size and light weight, it does appear to have its disadvantages. CPU temperatures were never low – they hovered around a respectable 40 degrees Celsius at idle, but quickly jumped up to around 60 degrees Celsius at load. This resulted in a noticeable heat buildup on the bottom of the laptop and along the left side of the keyboard. It was never more than annoying, but could result in sweaty palms when using the laptop for long periods of time.

The fan strained to keep up, as well, which meant it was often noisy. Even when kept at idle on a desk the fan would sometimes be obliged to kick in, spooling up to full blast and staying there for five or ten minutes at a stretch. The noise, while not unpleasant, is noticeable from across my apartment’s living room when nothing else is running.

The U260’s size also takes a toll on connectivity. You’ll find two USB ports, HDMI, VGA, Ethernet, a combo mic/headphone jack and (oddly) and PCI Express Mini Card slot. That’s it. I never consider a lack of connectivity to be a damning fault, but it’s always disappointing when an otherwise well built, high-quality laptop fails to include USB 3.0 or Firewire.  This is particularly true of the U260, which otherwise has many features that will appeal to enthusiasts – exactly the type of folk likely to have a USB 3.0 or Firewire drive.