Intel’s Core i3-380UM processor is the heart of the U260. The UM suffix designates the processor as an ultramobile variant, which means that it has a clock speed limited to 1.33 GHz. Turbo Boost isn’t included, so this relatively low clock speed is what you’re stuck with. The U260’s graphics power is provided by Intel, as well.

Given this, the U260 main competition is made up of laptops that are less expensive. Let’s dive into the numbers and see how the U260 fairs. 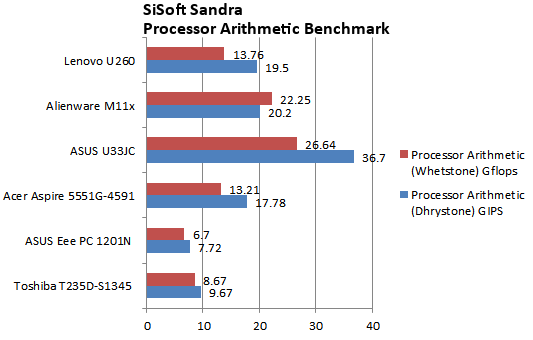 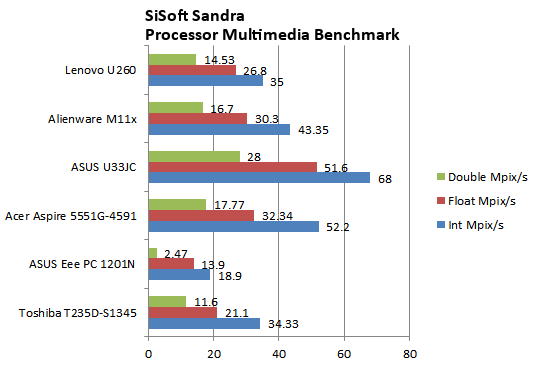 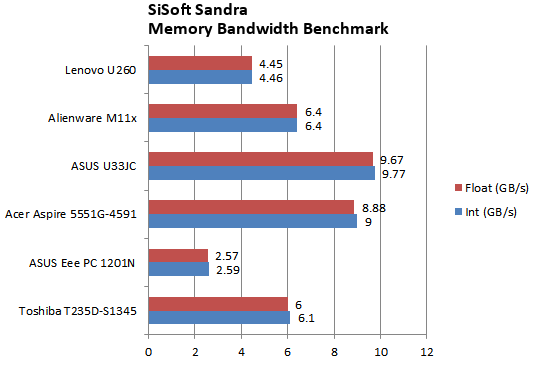 As usual, SiSoft’s synthetic benchmarks do a great job of letting us know where the processor stands among its competitors. The low clock speed of this Core i3-UM processor limits the performance, but the Lenovo U260 still easily outruns less expensive ultraportables like the Toshiba T235D.

The U260 isn’t substantially slower than the M11x, either; there is certainly a difference, but as I’ve remarked before, the turbo-boost feature on the more expensive Core i5/i7-UM processors often fails to meet the maximum turbo boost ceiling during a prolonged period of high processor loads, resulting in only minor performance improvements. Fortunately, the U260 seems priced in recognition of this; the Core i5 version is a mere $50 upgrade.

Having considered the synthetic processor tests, it’s time to examine the U260 with some general performance benchmarks. 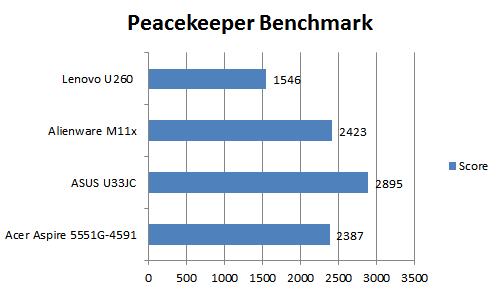 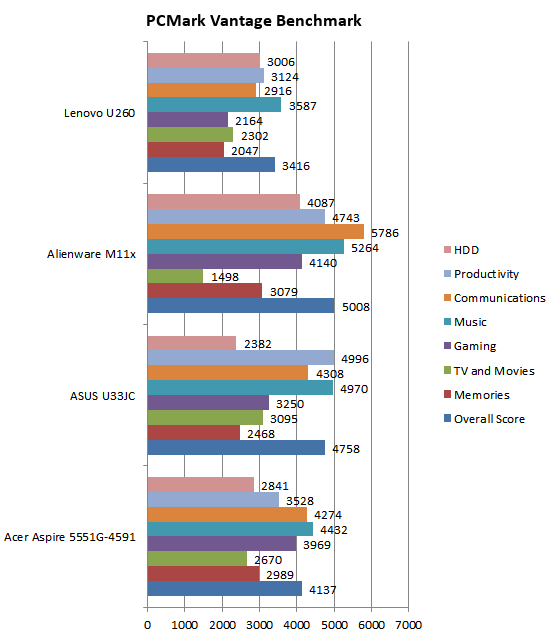 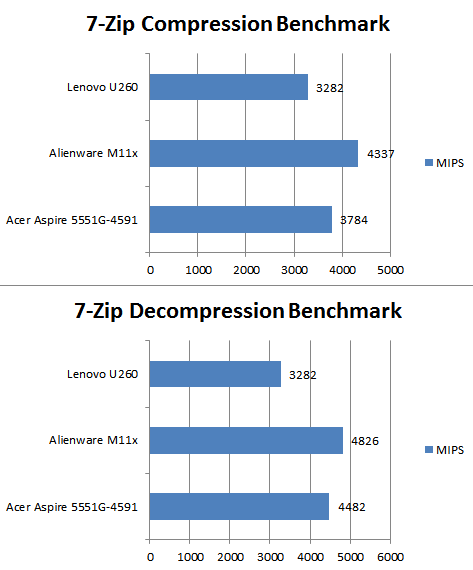 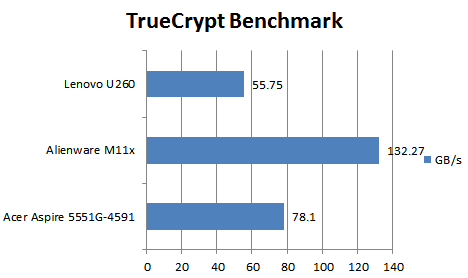 The story here pans out as expected. The clock speed of the U260’s processor holds it back in the Peacekeeper benchmark and the 7-Zip benchmark. The results in Truecrypt and PCMark Vantage are great for an ultraportable laptop, but noticeably below the results that can be achieved with larger, better equipped laptops. Even the quickest ultraportable we’ve benchmarked, the M11x, often fails to compete with laptops with basic Core i3 processors. The lesson here is that the type of processor you buy matters. When Intel slaps the UM label on a product, they’re not kidding about its purpose.

While the U260 doesn’t make any claims about being a gaming laptop, we always check gaming performance because games are an important window into a laptop’s graphics performance.  The Lenovo U260 uses Intel’s HD graphics, so performance is likely to be mundane. 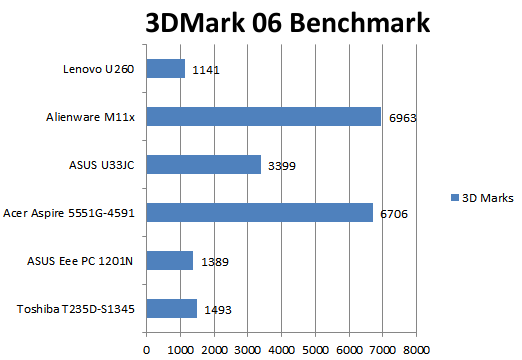 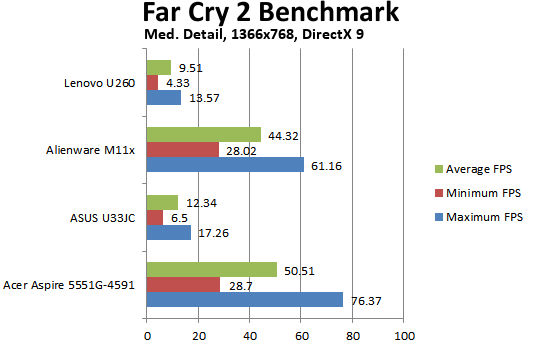 Yep, that’s mundane as can be. While Intel’s HD Graphics are entirely capable of handling HD video, they’re a slouch where gaming is concerned, and can’t provide sufficient muscle for 3D games unless you turn the resolution way, way down.  You’ll probably notice, as well, that Just Cause 2 isn’t included in this round of benchmarks. That’s because the U260 simply would not run it – instead, it crashed out with a DirectX error.

Competitors like the Toshiba T235D, with its Radeon integrated graphics, performance much better in 3DMark 06. With that said, however, the reality of gaming on small laptops like the U260 is that most new 3D games won’t run well on them, no matter the integrated graphics you have.

Let’s try to end the performance section on a better note by examining boot and resume times. 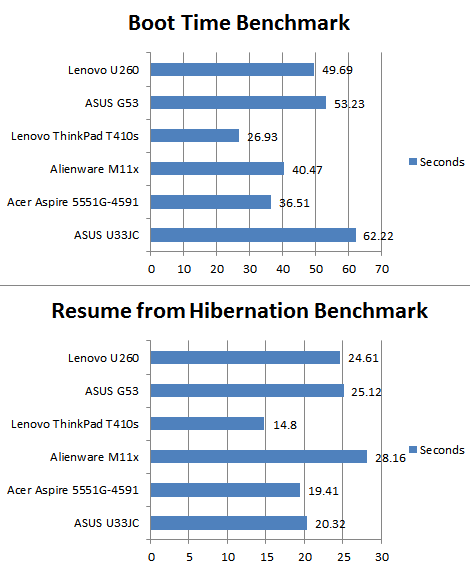 The boot time of the U260 wasn’t good, but wasn’t bad. Processor performance seems to have a limited impact on boot times, and as a result the U260 is quicker than the ASUS G53, which has a far better Core i7 processor. Yet the U260 is also slower than the Acer Aspire 5551G, which has a roughly equivalent AMD dual-core.

Resume times present the same story. At just a tad over 24 seconds, the U260 beats some laptops with better hardware but also falls behind the Acer Aspire 5551G, which managed to resume in less than 20 seconds.

If you’re looking for performance, and you’re willing to go with a slightly larger laptop to find it, the U260 isn’t your best option. This $899 laptop is easily outgunned by laptops that cost the same or less. The ASUS U33JC is a particularly good point of comparison, as it costs just $100 more than the U260 but is clearly quicker.

The iPad is no longer alone