As I mentioned earlier, the Xoom is the first tablet that we have seen with the NVIDIA Tegra 2 SoC. While the first Tegra phone, the Atrix 4G has been out for a little while longer, this is the first time we have seen Tegra running the 3.0 platform.

The Xoom marks the far journey that NVIDIA has taken in pushing the Tegra technology in the mobile device world. Before the Atrix, the only vendor to launch with the Tegra platform was Microsoft with the Zune HD in late 2009, and the now defunct KIN series of phones in mid 2010.

Note: this benchmarking section is currently experimental and constantly being tweaked to better reflect actual performance of these devices. In order to compare the performance of phones with similar clockspeeds, but different mobile architectures and operating systems, we have come up with this new experimental mobile device performance testing.

For this test, we ran the mobile versions of Linpack, a popular tool for measuring Floating Point operations in supercomputers. We ran Linpack on a variety of our own personal devices. 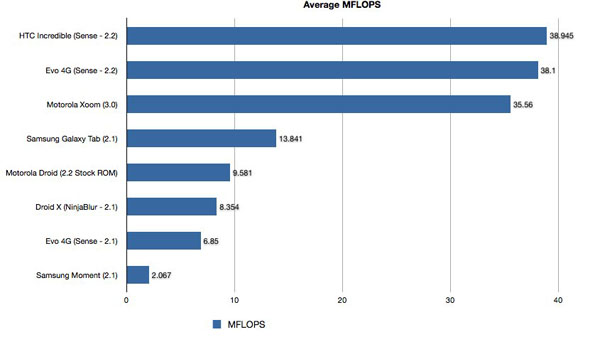 From here, the results are somewhat surprising. While we expected the dual core Tegra chip to outpace competitors such as the Qualcomm Snapdragon in the HTC Incredible, it has not. This however, is likely due to the version of Linpack, and not raw performance of the chip.

Quadrant is an entire system performance mobile benchmarking suite, which tests things like the CPU, Memory throughput, I/O access, as well as 2D and 3D Graphics. 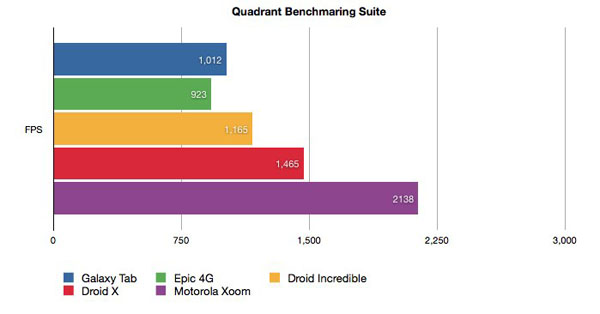 Here we see a more expected set of results. Tegra outperforms its closest competitor, the TI OMAP3 SoC found in the Droid X by about 46%.