Introduction and the new Turks GPU

New Turks GPU is budget HTPC goodness for under 100 bucks. Can it compete with previous cards though?

It seems that the graphics card wars have really heated up recently.  With the release of the Radeon HD 6990 4GB and the GeForce GTX 590 3GB card it might seem that EVERYONE was spending $600 on their next GPU purchase.  Obviously that isn’t the case and the world of the sub-$100 card, while way less sexy, is just as important.

This week AMD has announced a slew of new options to address this market including the Radeon HD 6670, HD 6570 and even the HD 6450.  Topping out at $99, the Radeon HD 6670 offers good performance, strong HTPC features and low power consumption.  NVIDIA’s competition is still reasonable though as we compare how the now price-dropped GeForce GTS 450 sits into the stack.

A Set of New GPUs – Turks and Caicos

The new GPUs from AMD are actually new die spins, complete with unique codenames of Turks and Caicos.  Based on the HD 6800-series Barts achitecture, Turks is applied to both the HD 6670 and HD 6570 while Caicos is the handle given to the lowest cost HD 6450 offering that was actually released last week.

As with most graphical competitions at this low of a price point, AMD spent most of their time talking about how the HD 6600/6500/6400 cards can upgrade the experience of the users when compared to integrated graphics of Sandy Bridge or even previous Lynnfield-based platforms.  Even with the vast improvements in GPU performance found on the Sandy Bridge platform, the truth is that there is a lot of room for expansion and upgrades from NVIDIA and AMD.

This screenshot compares Battlefield 2: Vietnam running on a Core i5 processor versus on the same CPU with the AMD Radeon HD 6670 handling the graphics load.  Even at a resolution of 1366×768, the game runs much better and creates a much better gaming experience on the discrete solution.  A framerate of 7 versus one of 42 is more than noticeable.

Of course, you can likely PLAY BF2: Vietnam on the Intel-only solution by decreasing image quality settings to a level below that of the discrete AMD option but this is a solid apples-to-apples comparison.

HQV is a video quality benchmark that can be somewhat subjective, but AMD is demonstrating that even with the improved video processing engines in the Sandy Bridge based design, a discrete solution can provide a better experience for upgraders in more than just gaming. 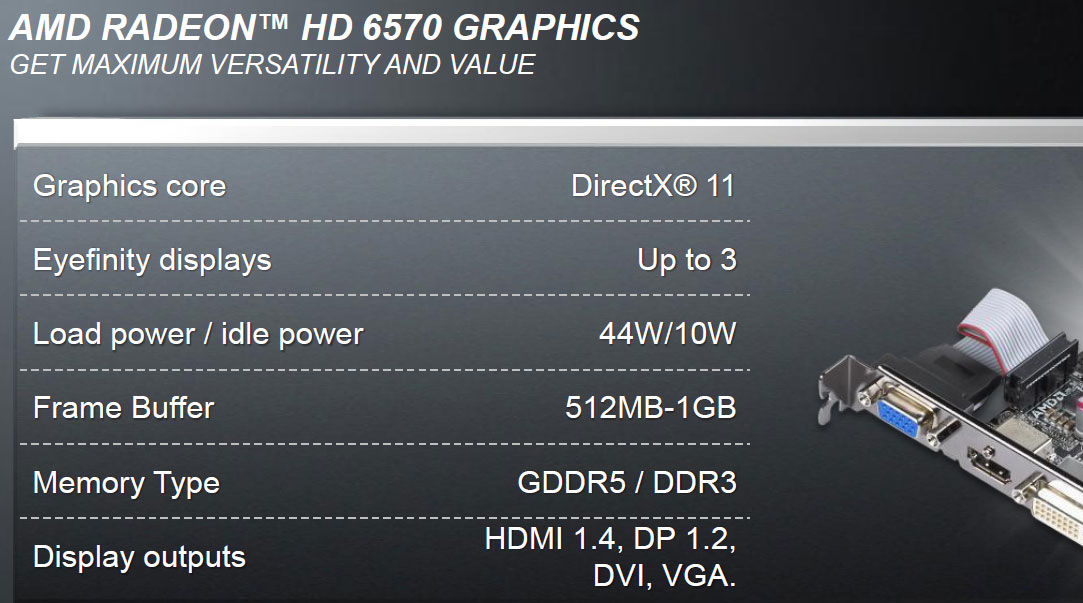 For our testing today we are going to be looking at the Radeon HD 6570 and the HD 6670, saving the HD 6450 for a separate piece.  The HD 6570, otherwise known (by me) as Turks Minor, is a DX11 GPU capable of handling up to 3 simultaneous display outputs and also Eyefinity cross-monitor gaming.  Obviously running more than one display on a lower cost, lower performing card can cause some headaches as we probably don’t recommend it, at least it is an option for those of you with low resolution monitors.  The card will be offered in both 512MB and 1GB options (though our testing sample is a 512MB variety) and will also come in both GDDR5 and DDR3 options. 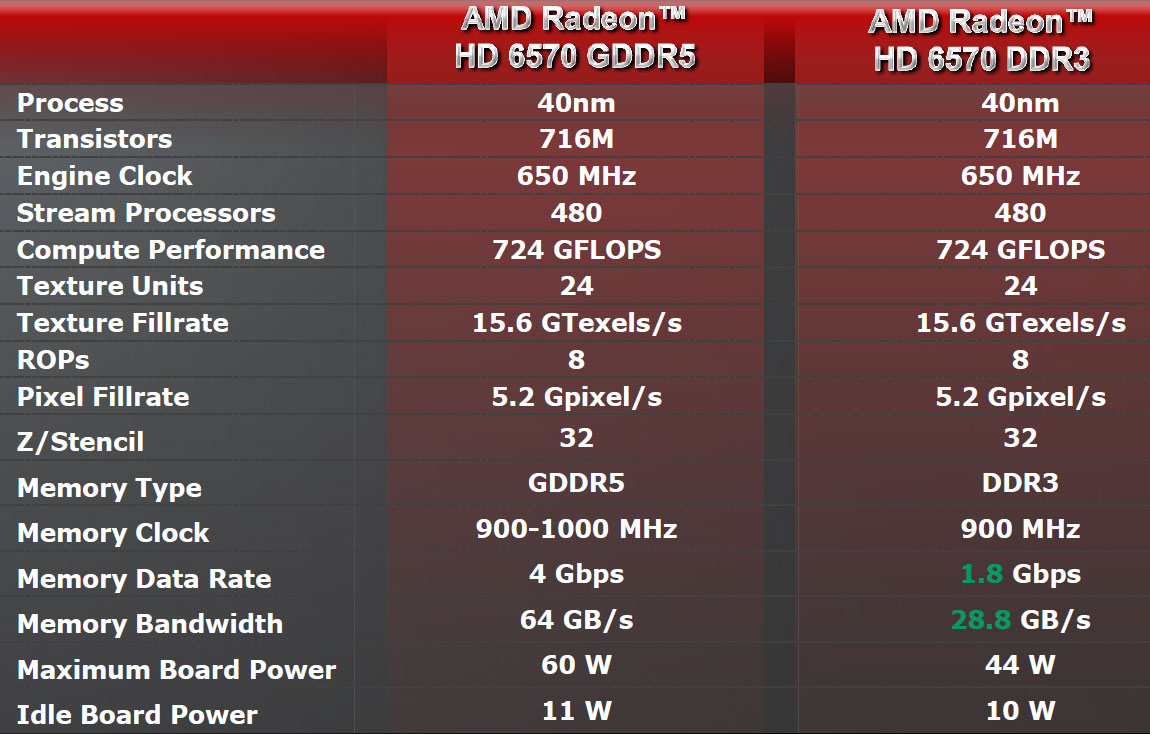 The HD 6570 is a 40nm GPU of 716M transistors and 480 stream processors.  Those computing cores run at a reasonable but modest 650 MHz at 60 watts for the GDDR5 model and only 44 watts for the DDR3.  All of the specifications remain the same across both card options except when we get to the memory bandwidth that jumps from 4 Gbps (64GB/s) on the GDDR5 card all the way down to 1.8 Gbps (28.8 GB/s).  This difference will without a doubt result in significant performance differences so if you are looking for a HD 6570 card in the future, make sure you lean towards the GDDR5 options available. 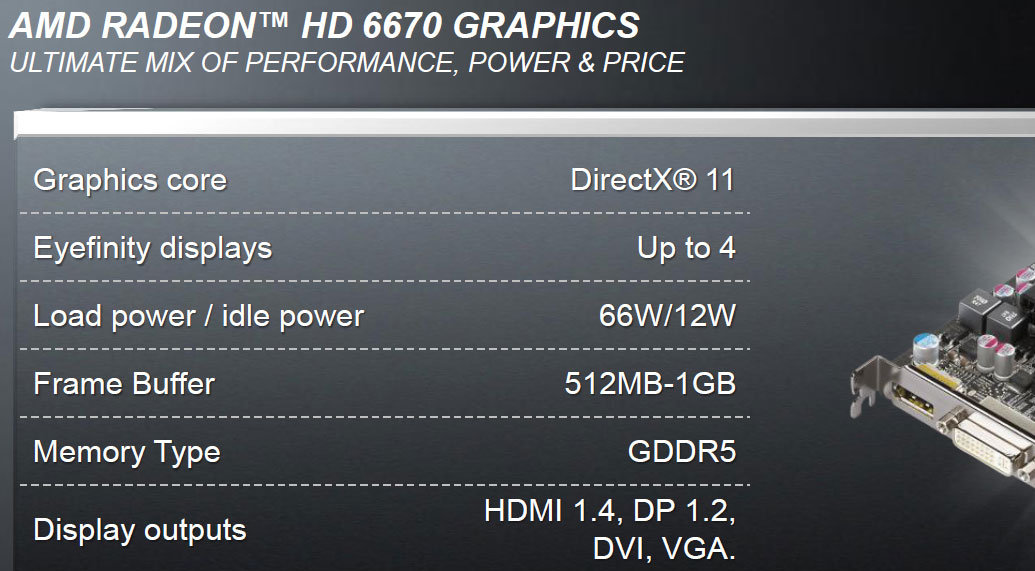 The Radeon HD 6670 card is based on the same GPU technology but can support 4 displays (add-in card vendor design specific though) and runs at a slightly higher 66 watt maximum power consumption. 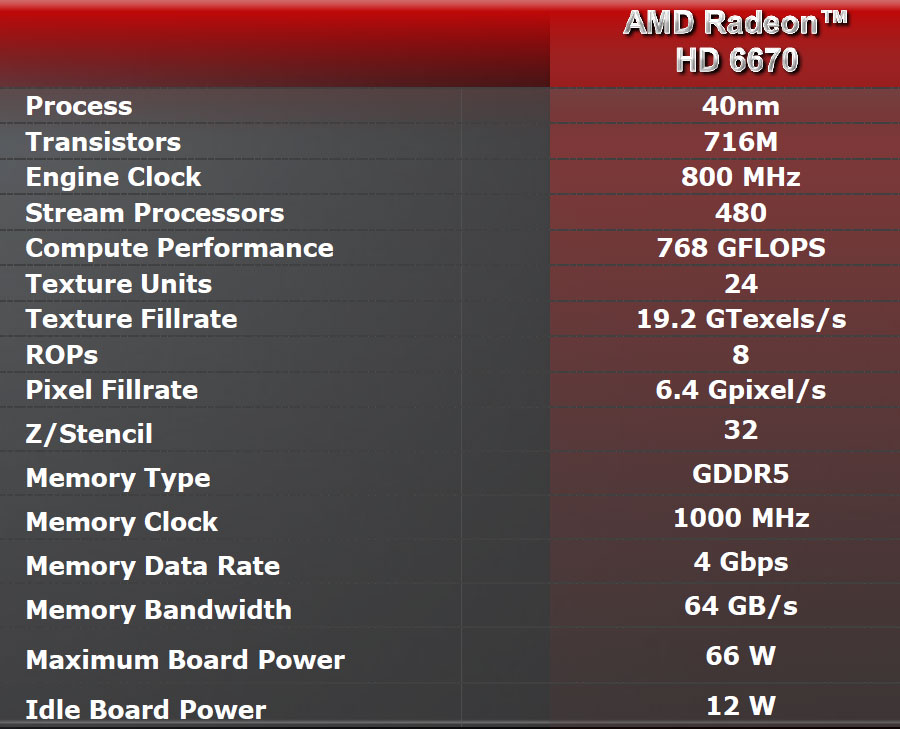 Turks Major (again, I just made that up) still sports 716M transistors at 40nm and 480 stream processors, but increases the clock speed up to 800 MHz and the GDDR5 memory speed up to a full 1.0 GHz.  Pixel and texture fill rate numbers increase only based on the clock speed changes as the rest of the specifications including texture unites and ROPs mirror those of the HD 6570.

What do you get for this amount of graphics horsepower?  AMD targets that magical 30 FPS at 1080p resolutions and finds that quite a few games including Call of Duty: Black Ops and Metro 2033 are able to hit it.  We have our testing to get to of course, but for a $99 GPU that sounds pretty good. 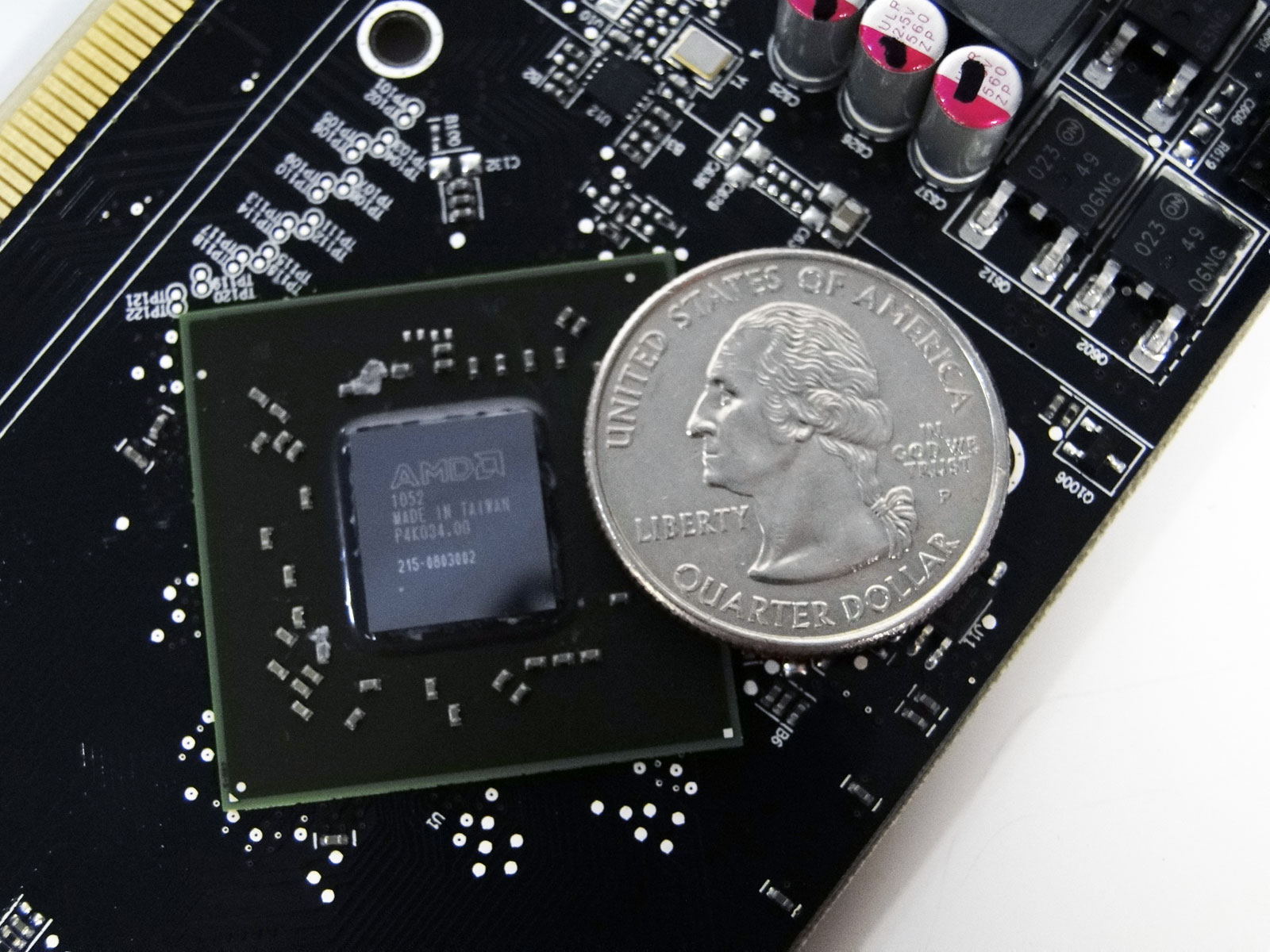 Can this tiny GPU bring in some much needed cash to AMD?