AMD let leak today that late last month the Singapore packaging facility shipped the first Llano products for revenue. This is a big event for AMD, as their Future Really is Fusion. I take a look at what all this means for the company, as well as cover how their motherboard partners are going to handle part of the transition to AM3+.

AMD let leak today that late last month the Singapore packaging facility shipped the first Llano products for revenue. This is a big event for AMD, as their Future Really is Fusion. I take a look at what all this means for the company, as well as cover how their motherboard partners are going to handle part of the transition to AM3+.Way back in early November, 2010 it was reported that AMD began their first revenue shipments of the Zacate/Ontario processors to their partners.  This was big news for AMD, as they expected these processors to make quite the impact in the market.  It took a while for the first processors to actually hit the market in final form, and it wasn’t until after CES in early 2011 that we actually saw products that were available to consumers.  Things really did not take off until as recently as February, and the demand for these chips is still at a very high level.

So today’s announcement on the AMD Blog site that the packaging arm of AMD in Singapore has shipped the first revenue Llano based parts is very important for the company.  While Llano is not based on the next generation Bulldozer CPU architecture, it does feature what could be argued as the fastest and most advanced integrated graphics processor in the world.  AMD is still aiming for solid CPU performance by including a fast four core Phenom II based processor, with some IPC improvements that should help it keep competitive in most workloads.  But the real star will be the graphics.  While we have seen some big leaps forward over the past few years in integrated performance, this should be a significant landmark in graphics technology.  AMD was one of the first to provide users with acceptable 3D performance in the original AMD 690G chipset, and improved it with the 780, 785, and 800 series of integrated graphics.  The integrated part inside the Llano should be quantum leap ahead in features and performance as compared to anything else out there. 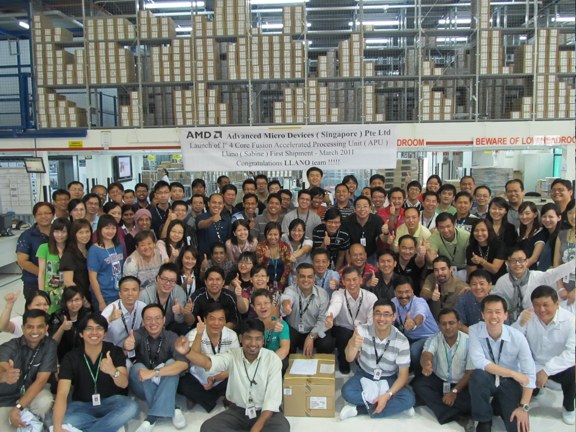 The happy group of workers with the plain, brown colored box holding the first revenue shipment of Llano based processors.

It took approximately three months before we saw initial penetration of Zacate based parts in the retail market, and we can expect about the same amount of time for Llano.  This will be the first 32 nm part that AMD has released, which is around 18 months after Intel launched their first 32 nm parts.  AMD and GLOBALFOUNDRIES have wanted to cut that gap, but nobody else in the world has the fabrication resources that Intel does.  I would imagine that many of these first Llano parts are actually aimed at the notebook market, where they could make the biggest financial impact as well as provide some TDP/clockspeed leeway which allows GLOBALFOUNDRIES time to work on higher clocked versions to improve yields and bins.

We will see desktop parts shortly after, and can expect a fair supply by early July.  This should be hitting OEMs as they are preparing for the “Back to School” launches in early August.  AMD is truly offering what looks to be standalone graphics card performance on a CPU, all at around 95 watts TDP for the average desktop part.  Combined with a true quad core processor and an ample amount of L2 cache per core, we should see performance that rivals that of a high end Athlon II X4 combined with a HD 6550 graphics card.  All combined in one nice little package, and for a slightly lower cost (and a lower cost of goods for the manufacturer).

Earlier last week we were informed that quite a few motherboards from Asus, Gigabyte, and MSI will be compatible with the upcoming AM3+ based Bulldozer products.  Because none of these current boards are built to utilize CPU graphics, they likely will not be compatible with Llano.  This really wouldn’t make any sense anyway, since current AM3 processors would work just as well as the first generation of Llano processors.  But the current AM3 motherboards should not have a problem with the first generation of Bulldozer processors. 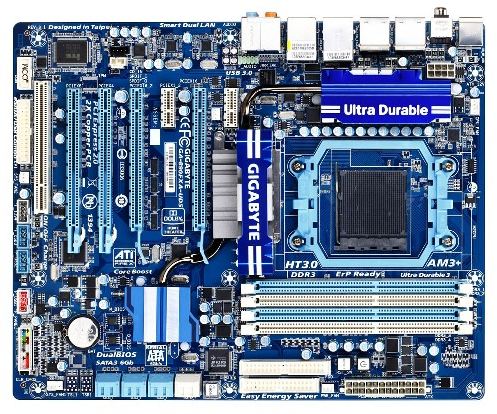 Gigabyte is shipping boards with the block socket denoting AM3+ compatibility.

Asus and MSI are providing BIOS updates to their 800 series of motherboards.  Asus looks to provide BIOS updates for 890FX, 890GX, and some 880G based boards.  MSI is concentrating on the 890FX and 890GX series, but leaving out the 880 and 870 parts.  Gigabyte is actually shipping “Black Socket” AM3+ compatible boards, and these comprise nearly their entire current lineup of 800 series of boards.  Users have spotted the black socket 870 boards for sale around North America, but so far they have been a handful of boards.  From all indications these are not actually AM3+ sockets, but are in fact AM3 but in a black plastic to convey Bulldozer/AM3+ compatibility.  The AM3 socket actually has 941 pin holes, but AM3 CPUs feature 938 pins.  AM3+ will features 942 pin holds, but the assumption is that the actual chips themselves will have a few pins less than 942.  Hence the ability to fit into current AM3 boards even though AM3+ processors will have more pins.  There will likely be certain tradeoffs with using an AM3 board with AM3+ processors, and these look to be related to power efficiency and maximum turbo clockspeed targets.  Current AM3 boards do not look to have the vast VCore switching that AM3+ boards will have, and we could see some limitations provided the HT 3.0 bus of current AM3 boards as compared to the updated HT 3.1 revision in AM3+.

Rumor has it that the Bulldozer release will be around June 20, while Llano will be officially unveiled in the first week of July.  That may or may not hold true, depending on how well AMD is able to ship these products.  Computex will likely see a lot more information slip out, as well as the ubiquitous motherboard support and floor samples being freely viewed by the public.  The official release of AM3+ motherboards should occur by the end of this month, and perhaps in early May.  AMD has a great need to seed the market with these motherboards, and they are also backwards compatible with AM3 processors.  We also may see the first integrated support of USB 3.0 in these motherboards, as AMD has received USB 3.0 certification for the Hudson FCH core logic chips.  There is still confusion as to how these are going to be placed in the market, or if they are even compatible in conjunction with the AMD 900 series of northbridge chips.

These are certainly exciting times for AMD.  The HD 6000 series of graphics chips are doing well in the market.  They are now truly competitive at the high end again.  Their CPUs have been holding their own, especially due to the help that Intel gave them with the Sandy Bridge issue.  They are about to release what looks to be a very power CPU architecture in Bulldozer, and they will be rewriting the books when it comes to integrated graphics performance and capabilities.  Certainly AMD will not overtake Intel, but we as consumers do need a strong and competitive AMD for the sake of our own wallets.