Testing of power consumption is pretty important when looking at higher end graphics cards like these.  In fact, EVGA recommends on their website that users of the GTX 460 2WIN card have a minimum of a 700 watt power supply with at least 46 amps of power on the +12v rail.  Those are pretty steep requirements so let’s see how our real-world power consumption turned out. 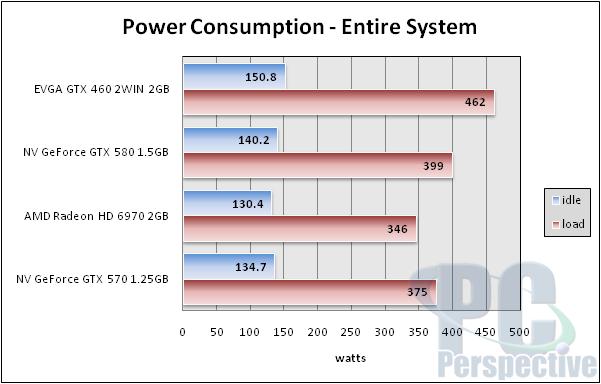 Idle power results show that the GTX 460 2WIN does use about 10 watts more than the GTX 580 and under a full gaming load it uses as much as 63 watts more power as well.  That is significant difference considering how much more power hungry the GTX 580 is compared to the HD 6970 and even NVIDIA’s own GTX 570.  Obviously the power consumption of the 2WIN card is going to be a slight hit on its overall reputation and the performance of the card seems a bit less impressive in this light as well. 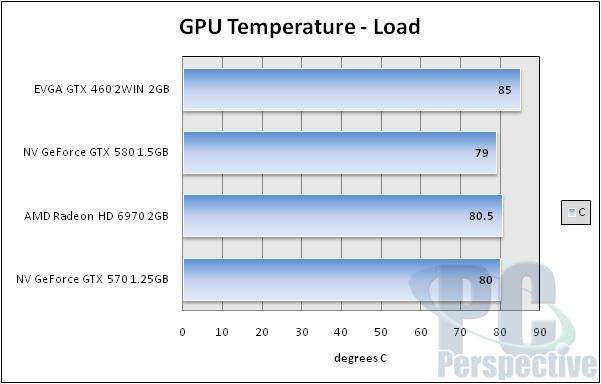 Temperatures on the EVGA GTX 460 2WIN were also higher than any of the other cards in our testing today getting as hot as 85c during Metro 2033.  While this is high, it isn’t a huge concern as it is well within the limits of the GPU and board design.  Noise levels weren’t considerably higher than any other GPU tested either, which is good news.